WILMETTE – The year was 1939, and a 15-year-old Jewish boy was traveling alone on a train to Brussels to escape his native Germany where the Nazi regime had seized power. He was leaving behind his parents and two younger brothers to live with strangers, under a Belgian children’s refugee program sponsored by a Jewish women’s group. 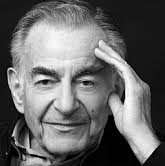 At that time his fate was unknown, but this young man not only escaped certain death from the Nazis, but went on to become an American citizen and bravely served the U.S. Army to help defeat Nazi Germany.

While this story sounds like the plot of a Steven Spielberg movie, it is the true story of Walter Reed, a 40-year resident of Wilmette. For the past five years, Reed has been researching and writing a book about his experience and that of 100 other German and Austrian children who were part of a Jewish children’s refugee colony, known as the “Children of La Hille.”

While most Americans are familiar with the horrifying statistics of World War II — six million people were killed in the Holocaust — few realize that one million of those victims were children. Given those numbers, it is remarkable that only 11 of the 100 Children of La Hille were caught, deported and murdered by the Nazis.

“That is an incredible record entirely due to the fact that these women tried to protect and rescue us,” Reed said.

He also shares details about the Swiss and Belgian women and men who were instrumental in rescuing the Children of La Hille. “The people that were helping us were just heroic people,” he said.

The book starts on Kristallnacht in 1938, when all German-Jewish men and older boys were arrested and put into jail by the Nazis. Reed and his father were arrested in their small village near Wuerzburg, Bavaria. When Reed’s parents learned that Belgium was accepting Jewish children as refugees, they quickly put their oldest son on a train for Brussels in June of 1939. 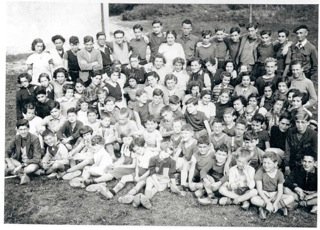 The refugee children’s colony in Seyre (France) near Toulouse after fleeing from Belgium in May 1940.

Reed’s time in Brussels was short-lived and in less than a year he and 100 other boys and girls left the Belgian refugee camps for Southern France, escaping the German army’s invasion of Brussels by a mere two days. The children ultimately settled in a 15th century chateau, the Chateau de La Hille in Southern France. Life there was by no means easy; Reed recalls inadequate food, heat and clothing, as well as being being forbidden to speak German. 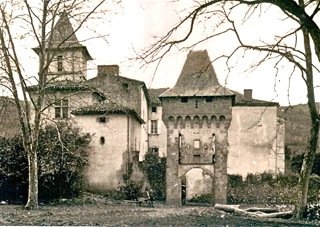 By way of Spain and Portugal, Reed ultimately immigrated to New York City in August 1941, through the efforts of his mother’s siblings (all of whom lived in New York) and the New York based Hebrew Immigrant Aid Society (HIAS).

After he was drafted into the U.S. Army in 1943, Reed’s path to citizenship was expedited by the U.S. government. “I was stateless because the Nazis took away my citizenship,” he said. Reed also decided to change his name from Werner Rindsberg to Walter Reed, noting that having a German-Jewish name at that time was viewed in a negative light by most people. But Reed, then just 19, worried what his parents would think.

He didn’t know that his parents and two younger brothers had died in Poland in 1942. 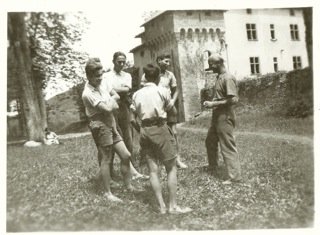 A group of older boys at the Château de La Hille in 1941
shortly before Reed (far left, arms folded) was able to leave for the USA.

After the war, Reed went to college and became a successful businessman in Chicago as the chief spokesman of the American vending machine industry. Reed concealed his background from everyone except his wife and family for more than 50 years. His new name allowed him to assimilate into American culture, and he told people he was born in Brooklyn and his parents had died in a car accident.

“I totally hid my past and I had no connection of any sort with my companions from La Hille,” he said.

It wasn’t until Reed visited Southern France in 1997 with his wife and three sons that he learned the survivors of the Children of La Hille had been holding reunions and actively looking for him. From that point forward, Reed reconnected with his old friends and became the coordinator of all survivors, who had since scattered all over the world. In 1998, he organized a reunion that was held in Wilmette and Chicago and then a second reunion in Southern France a year later. 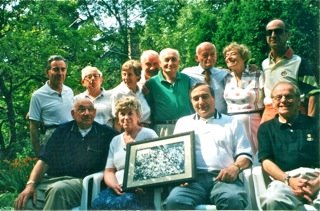 “This was such an emotional reunion because many people who came were young boys and remembered nothing,” he said.

Reed did not immediately set out to write a book about his experience. As a child, he knew few details about his rescuers and how they successfully saved the majority of the Children of La Hille. In 2004, Reed contacted Susan Johnson, the granddaughter of Lilly Felldegan, who was instrumental in saving Jewish children as a member of the Belgian Women’s Rescue Committee and working at HIAS in New York. Reed was surprised by how much Johnson knew about him.

“When she mentioned some of the names I realized I knew all about this stuff,” Reed said.

Johnson ultimately shared with Reed thousands of documents that her grandmother had saved about the activities of the Belgian Women’s Rescue Committee and HIAS. Felddegan’s papers have since been archived in the U.S. Holocaust Museum archives in Washington, D.C.

“I know an awful lot today that I never knew,” Reed said.

For example, Reed discovered during his research how the president of the Belgian Women’s Committee convinced the Swiss Children’s Aid Society (which was part of the Swiss Red Cross) to assume responsibility for the children’s camp in France. “Most of our children would not have survived if she had not done that,” he said. After Reed and other children had immigrated to the U.S., it was the Swiss Children’s Aid Society that saved almost all of the remaining children from capture by the Nazis and convinced the children to escape across Swiss and Spanish borders.

In the early 2000s, Reed also connected with Dr. Theo Tschuy, a Swiss Presbyterian minister who was writing a book about the Children of La Hille. Reed traveled throughout Europe assisting Dr. Tschuy in his research. Unfortunately, Dr. Tschuy died unexpectedly in 2004 before he had written any of the book.

After uncovering so much new information about his past, Reed decided that he would write a book sharing all he had learned about the experiences of these 100 Jewish children and their rescuers. Reed built upon Tschuy’s research, visiting archives in the U.S. and Europe, uncovering information in Felddegan’s records and visiting historic sites.

At this point, Reed has found all but four of the Children of La Hille or their relatives. After the war, the children settled all over the world, from the U.S., Canada and Israel, to various countries in Europe. Reed searched archives, scoured the internet and worked connections to find his companions.

Reed hopes by sharing the story of the Children of La Hille and the heroic adults who helped rescue them from the Nazis, people will understand what it was like to live during that time.

“My book will be one more example of how it felt to be a family that had children and felt threatened,” he said.

Reed’s book is titled The Children of La Hille: Eluding Nazi Capture During World War II and will be published by Syracuse University Press in mid-November. For more information go to www.syracuseuniversitypress.syr.edu.