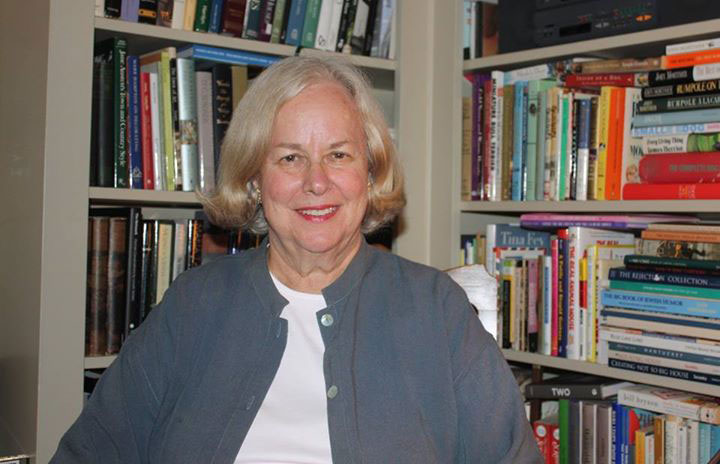 When Louise Holland walked into Winnetka Village Council meetings during her four-year tenure as president, she always kept in mind a pressing question that waved like a red flag in front of her, “What is good for the village?”

The 45-year village resident, who in addition to serving as president from 1997-2001 and also served as a village trustee for five years before that, now feels more than ever that the question is the most significant, salient–indeed even supersedes all others–when considering the proposed “One Winnetka” development project. Currently, Louise sits at the table with other members of the Plan Commission evaluating the proposed project, as she wears the hat of chair for the Landmark Preservation Commission.

“It’s the largest development project ever requested of the village,” Louise says of One Winnetka. “There’s nothing in Winnetka that can compete with this.” When the village has a large proposed project like One Winnetka under the microscope, the Plan Commission has an obligation, even a duty, to pledge allegiance to finding a public benefit.

“In the case of One Winnetka, there is a specific development ordinance that they look at,” Louise says. “It’s called a planned unit development. Any proposed development that’s over 10,000 square feet has to be assessed a little bit differently. When you have a large project like One Winnetka, there are areas where the Plan Commission can say, ‘Is this a benefit for the village?’ Then they can stretch those parameters. But it is up to the applicant to provide a very specific public benefit that the project will give to the village.”

The mass and scale of One Winnetka are two enormous issues that Louise, as a Plan Commission member, sees as obstacles. The building is proposed to stand at 70 feet tall with six stories of Beaux-Arts architecture. “The 70 feet, in my opinion, is something that should not be granted,” Louise says of the decision before the Plan Commission. “The zoning ordinance was changed two weeks before this project was made public in February, and the zoning parameters were at 35 feet in height and 2.5 stories. It went to 4 stories, 45 feet, with a 10-foot setback on the top floor.” Setbacks are required so that a large architectural structure does not loom over the street.

Recently, Louise got her walking shoes on and scouted out properties in the northern suburbs that would vividly show what 70 feet up looks and feels like. “I found a seven-story building in Evanston with another Plan Commission member,” Louise says. “We took a picture of that building with a person standing on the ground. It tells the story. It’s just a huge, huge property. Our laws don’t say 70 feet. They say 45 feet. In my way of thinking, this is not good for Winnetka.”

“That’s one area where I disagree completely with Mr. Trandel,” Louise says. “They have not testified to any specific benefit for the public, and yet they are asking the village for a great many things.”

Among those requests is 8,000 square feet of Lincoln Avenue, which is a swath of pavement that will cut an incursion of 39 feet into the street. “Is this good for the village?” Louise says. “They claim that Lincoln Avenue will still be a two-way thoroughfare going from Elm to Oak.”

But the reality of this incursion, like painted double lines down the midway, has yet to be defined. “I have specifically asked, as have other people in the community, to have the sidewalk and street painted, or put saw horses out so we can see what 8,000 square feet looks like,” Louise says. “You have to see that kind of thing.”

Stonestreet Partners wants to write a check for the 8,000 square feet of village property. “It takes away 39 feet and an eight-foot sidewalk from a village street that is rather heavily used,” Louise says. “What’s the public benefit of that? We get the dollars, but what it takes away is the use of Lincoln Avenue as a two-way street.”

Thinking back over the development history she’s seen firsthand in Winnetka, Louise remembers proposed new buildings that after initial questions, later fit perfectly into the jigsaw picture puzzle of the village.

In 2000, a developer submitted the required paperwork to build a 3 ½ story building on the corner of Winnetka Avenue and Green Bay Road. Louise served as village president at the time. “We said to the developer, ‘OK, we’ll give you an extra floor from 2 ½ to 3 ½ stories, but you must set it back so that it doesn’t loom over the sidewalk, and you must have an architecture that is reminiscent of the village. It doesn’t have to be Tudor, but it has to have a peaked roof.’”

When the architect on the project refused to change his plan, the members of the design review board took him for a ride. “They did a drive through of the village, and I think this architect finally saw what Winnetka looks like,” Louise said. “They built a very nice building. It fit all the needs of the condo owners who live there, and there’s a Verizon store on the first floor now.”

She also remembers other larger properties such as Winnetka Mews with four stories on the corner of Pine Street and Green Bay Road, which sits comfortably in the community. And, there is the building at 711 Oak Street with four stories that blends in with the surrounding neighborhood. Finally, there is the Winnetka Galleria on Lincoln Avenue that opened in 2000, which Louise labels as “beautiful.”

Many chapters of her life story have unfolded in Winnetka, and that’s why Louise is lending her voice to the final plan for this pivotal village location. “Because I care,” she says. “You live in a community for 45 years, and my husband and I raised our two children here, and now my son lives in Winnetka. In our little neighborhood on Oak Street, we have two families where the children came back and bought their parents’ home. So my neighbors are residents who I knew as little kids.”

Again, she looks at the compass that guides her viewpoint on the project: What’s good for the village? “You have a commitment to the community, and a commitment to at least make your thoughts known. Not everybody will agree with me. I hear a lot of the concerns that if we don’t do this development, the property will still be vacant, but I don’t agree with that. One thing I’m certain of is that One Winnetka could change the character of the village for the next 100 years.”