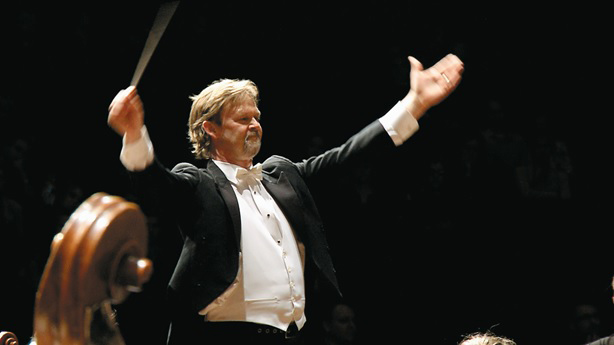 In addition to its new conductor, the LFCO will also celebrate its new performance area, following an extensive renovation of the Gorton performance space and surrounding areas.

At the September concert, the orchestra will perform beloved orchestral works inspired by stories, including Beethoven’s Egmont Overture, Ravel’s Mother Goose Suite, and Sibelius’ Symphony No. 2. The repertoire was chosen by Nordling shortly following his selection to lead the LFCO. (To buy tickets online, visit www.lakeforestcivicorchestra.org.)

The year-long search for a new conductor included four exceptional candidates, including Nordling, serving as guest conductor for one LFCO performance. The decision to offer the position to Nordling was based on overwhelmingly positive feedback from both the orchestral membership and LFCO audience members.

“The LFCO is ‘Your Community Orchestra.’ Our patrons had the opportunity to rate all our candidates and I couldn’t be more delighted that, overwhelmingly, the responses helped lead us to select Robert. Not only is Robert an exceptional musician but he is passionate about sharing his love of music with our local community,” said Howie Martino, president of the LFCO.

A native of New Jersey, Nordling began his early studies on violin with Stephen Clapp and Paul Zokovsky. Following his undergraduate study at the Wheaton College Conservatory of Music, he was awarded conducting fellowships to the Los Angeles Philharmonic Institute where he worked with Leonard Bernstein, Michael Tilson Thomas, Herbert Blomstedt and Erich Leinsdorf.

“The Lake Forest Civic Orchestra has a rich and long history of talented people, in community, making great music together as friends. I am thrilled to become a part of that community of music makers,” Nordling said.

While the LFCO’s focus will remain on sharing classical literature, Nordling’s vast appetite for all music genres will enrich the musical experience of concert-goers.

“I am a huge Tom Waits fan … I love jazz – Oscar Peterson is a favorite. Actually, there isn’t a musical genre that doesn’t appear on my iPod — metal, Gregorian chant, traditional Chinese opera, hip-hop, and Armenian” to name a few, Nordling said.

Please join Your Community Orchestra in welcoming Robert Nordling to the podium!