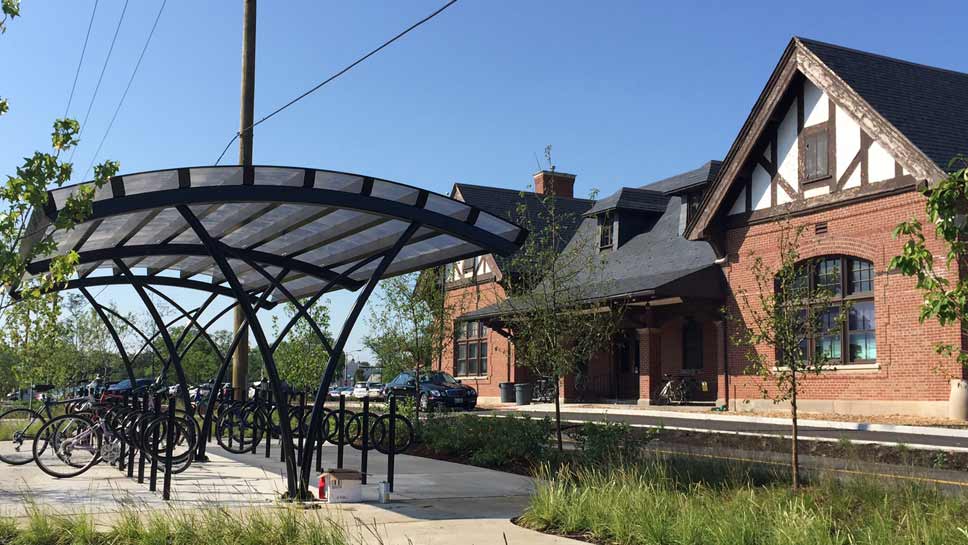 LAKE FOREST – Many Lake Foresters and bicyclists riding through the city are enjoying the newly expanded Robert McClory Bike Path between Illinois and Woodland Roads on the east side of town. But what’s that futuristic structure in front of the city’s historic train station?

As it was being constructed, many local people wondered if the structure was going to be a shelter for people awaiting rides from cars and buses on McKinley Road. Turns out it is a shelter, but for bikes not people.

Lake Forest Communications Manager Susan Banks said the city’s Historic Preservation Commission and Property & Public Lands Committee (a sub-committee of City Council) jointly selected the design following guidelines set by the grant the city received to fund a bike shelter, which required it to be a pre-fabricated structure. The grant was from the Congestion Mitigation and Air Quality Improvement (CMAQ) program, which is part of the Federal Highway Administration.

“Even without the limitations of the grant, it was recognized that any attempt to design and construct a bike shelter that tried to respond to the historic train station would fall far short in comparison,” Banks told Daily North Shore. “A decision was made to intentionally set the station and the bike path and the bike shelter apart visually, acknowledging one as a significant historic structure and the other as a contemporary structure linked to the bike path.”

She added that city crews are working on landscaping, which is designed to soften the visibility of the shelter and bike path.

The downtown section is not the only part of the Robert McClory Bike Path to see changes this year. Heading south, expect to see landscaping improvements to the bike path between Illinois and Old Elm Road. The city has received a $10,000 grant from ComEd and Openlands, a conservation agency based in Chicago, to remove invasive plants along the 2.5-mile section of the popular, heavily traveled bike path, according to a ComEd press release.

The Chicago Tribune reported that the Lake Forest Garden Club and Lake Forest Open Lands Association have matched the $10,000 grant.

Lake Forest was one of 23 communities (and the only North Shore town) to receive a Green Region grant from ComEd and Openlands in 2015.