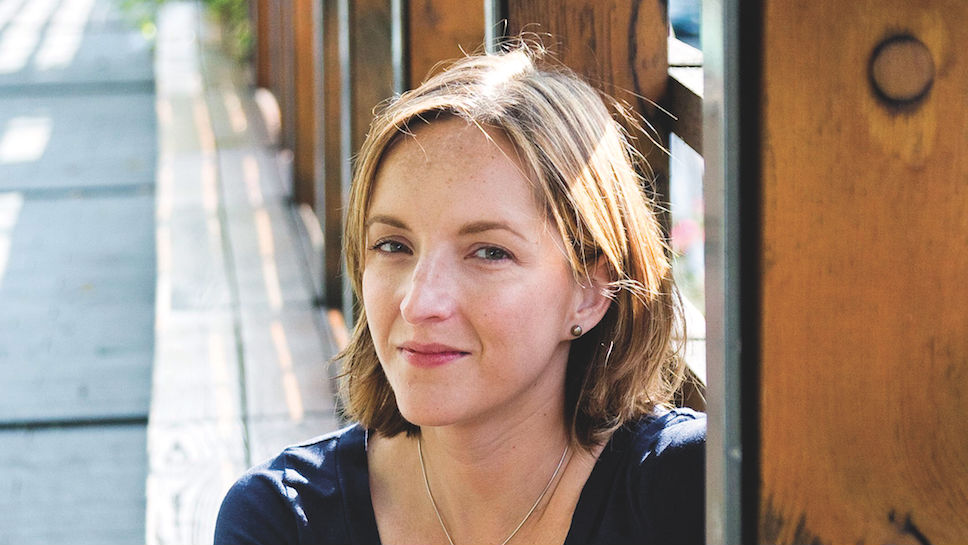 Her debut novel The Borrower and her second novel The Hundred-Year House not only earned her critical praise and awards but also a dedicated following of readers who love her talent for telling marvelous stories.

That aptitude is once again on display, this time in a short story collection titled Music For Wartime (Viking). The 17 stories, including one as short as little more than a page, feature an assortment of creative and fascinating characters — musicians and composers, photographers and other visual artists, circus people and reality TV people — all of whom are survivors in one way or another.

Makkai will read on Sept. 10 at 7 p.m. at Northbrook Public Library.

Here is a Q&A from freelance writer Gregg Shapiro:

Gregg Shapiro: Rebecca, if you don’t mind, I’d like to begin by talking about the Music For Wartime cover, which is reminiscent of a bygone era. I know that authors aren’t usually involved in the book cover process, but I was wondering what you think of it.

Rebecca Makkai: I love it! I know plenty of authors who have no say-so in their book jackets. I’m fortunate that my agent and I basically have veto power on the cover. My editor is amazing, and she lets us gives a lot of input into things like what artists we’re choosing. My first two books had hand-drawn covers, and we worked with the artist on that.

For Music For Wartime, it’s hard for a story collection because there’s not one central image that you can necessarily latch onto the way that for The Hundred-Year House they could put a house on the cover. They sent us some proposals that were cool. There was one with a bird’s talons swooping down. Nothing was quite right. They were getting sort of close and then suddenly, out of nowhere, they sent us this (image that became the cover). It was so bold and graphic and cool. The font, I felt, was sort of a throwback, like you said, to an earlier era. It almost feels like a reissue of Kafka or something.

GS: Can you please say something about determining the order of the stories in a collection such as Music For Wartime?

RM: I thought of it in terms of putting together an album. Of course, no one listens to whole albums anymore. But back when we did…

GS: …actually, all the kids are listening to vinyl these days.

RM: [Laughs] Great! The way a musical artist put together an album — they were trying to tell a story with the order as well as with each song. There’s a lot to the order of this collection. It starts with the story “The Singing Women” and it ends on an image, in the story “The Museum of the Dearly Departed,” of two people singing, and this woman listening to them and not knowing what to make of it; those two moments bookend the collection.

Also, there are stories about my own family history that are woven through that buildup as you go and also cast light on the other stories and why I would write them. It was important for me to balance the humor and the darkness in the collection by not having too many heavy or light stories next to each other. (I wanted) to change the texture as I went and keep it in balance.

GS: The stories in Music For Wartime were written before, during and after the publication of your novels The Borrower and The Hundred-Year House. Were any of the stories in the book originally intended to be novel-length as well?

RM: The only story that I thought of originally as a novel is that last story, “The Museum of the Dearly Departed.” It’s a story about this apartment building in Chicago where there’s been a gas leak and most of the tenants have died. These people are coming in and cleaning out the apartments, and there’s this woman who’s inherited an apartment and doesn’t really know what to do with all of the things. It gets more complicated from there. I originally had it plotted out as a novel. It was going to be about all of these people coming back to these apartments. It would actually be a pretty heavy book, but I think it would work as a novel.

GS: I’m glad you said something about hitting notes. As one could glean from the title of the collection, music is a recurring theme in the book. Do you play an instrument?

RM: I do. Not seriously or anything. I play the piano and I sing. I should say that I sing like most people sing — in the car. I should say that I sang pretty seriously through college, doing a touring chamber ensemble and things like that, as well as musical theater. The piano was also during college, but I was never going to make a career of it.

My parents were both talented musicians. My mom played the organ and my dad was an amazing piano player. That wasn’t their career. They were both linguistics professors. I grew up going to the Chicago Symphony Orchestra. There were concerts in my house when I was a kid, which was something I put into one of the stories in the collection. As I started assembling stories, I noticed that there was music in a lot of them, and the other arts were coming up, too. I decided to make that a focal point of the collection. To a certain extent, I wrote a couple of stories to fill that in. The story “Cross” is about a string quartet. I specifically thought – “If I’m going to make music the focus of the collection, I really need a story about actual practicing professional musicians somewhere in here.” Fortunately, I managed to find the help of a professional violinist to read a couple of the stories involving string instruments because I was winging it on that stuff [laughs].

GS: In the story “Cross” that you mentioned, the main character, Celine, comes home after being away to discover that a memorial shrine has been erected in front of her house because of an accident in which deaths occurred. Why do you think that the phenomena of crosses and shrines at accident sites has become increasingly popular, and what do you think of them?

RM: I think that’s why I wrote that story. I’m really disturbed by them. Not in the same way that the character in my story is disturbed. For her, it’s her house where it happened. The people making the memorial have made it incredibly tacky, and she feels she might be a snob for thinking that. She’s having religious issues with it.

I go on a lot of long cross-country trips with my family, and you see them everywhere. They probably make me a more careful driver. It’s really disconcerting to see, “Oh my gosh, all these people died on this road!” In many cases they are on somebody’s property line. They’re going to be seeing it every time they look out their window. The issues that someone could have with that is that it is a marker of death, which is disturbing, and also that it’s an overtly religious symbol. It came to me the way a lot of stories come to me where I’m noticing something in real life and sort of dwelling on it and obsessing  about it and then realizing that there might be something there to write about.

GS: The downtown New York art world is referenced in “St. Anthony Come Around.” In 2015, that world also figures into Kim Gordon’s memoir Girl In A Band and Brad Gooch’s memoir Smash Cut, as well as the movie Downtown 81, starring Jean-Michel Basquiat, which was just reissued on DVD. What do you think it is about that scene that has made it undergo such a renaissance?

RM: I don’t if it’s the amount of time that’s passed. I’m noticing it in other ways, too. The novel that I’m currently working on is set in 1985, in Chicago, with the specter of AIDS looming in the background. It’s also set partly in the present day. Because I’ve been writing about it, I’ve been really in tune with what’s being published and talked about.

Dale Peck just wrote a book called Visions and Revisions: Coming of Age in the Age of AIDS. Hanya Yanagihara wrote a novel called A Little Life that’s been getting a ton of press and seems to be about a circle of gay friends in the 1980s. From what I understand, she eclipses the AIDS issue in an interesting way. I’ve been questioning why I would want to write about that in this story and in my next novel. I was born in 1978. I was alive (then), but I wasn’t part of the Chicago or New York art scenes [laughs]. My life wasn’t directly impacted by AIDS in the sense that I didn’t lose anybody. I wonder if it’s just that we’ve had processing time for the AIDS issue, the art scene and everything that was going on in the `80s. There used to be more of a kitschy fascination with it.

GS: You make reference to movies in “The Museum of the Dearly Departed.” Which, if any of these stories, would you like to see made into a movie and why?

RM: Mmm, cool! That’s a great question. If you were to expand the plot greatly and add a lot of stuff to it, I think that “Saint Anthony Come Around” would be an interesting one. There’s this huge mystery at the heart of it. There’s a man who has disappeared and you have a lot of different characters that you could theoretically follow around through the 1980s art world, all of whom would have their own stories.

GS: What are some of your fondest memories of growing up in Lake Bluff?

RM: The education that I got, in every aspect, was really friendly to someone who would wind up going into the arts and writing. I went to Forest Bluff School in Lake Bluff, which is Montessori. I couldn’t write stories all day, but I would write stories any day, if that makes sense. I went to Lake Forest Academy for high school. I had this string of amazing English teachers who let me do creative work. Also, acting in plays at Gorton (Community Center) and doing musical theater in high school; it’s a community that values and supports the arts. My writing has gotten a ton out of having done theater as a kid. Living inside a story for that long, you learn about story structure in a way that I don’t think you can just from reading.