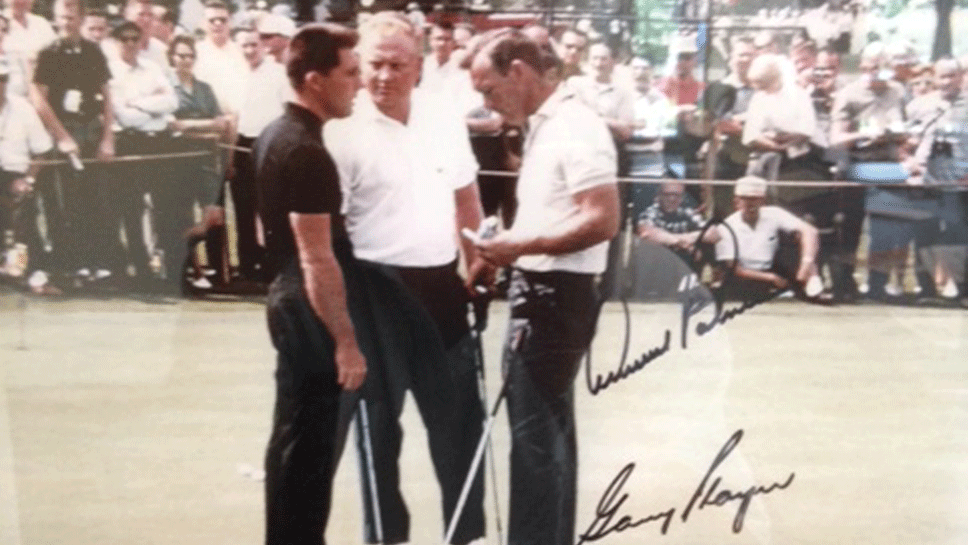 Gary Player, Arnold Palmer and Jack Nicklaus signed a picture of themselves during their 1963 match at Glen Flora Country Club.

It’s been a bonanza of late for professional golf on the North Shore. With the BMW Championship and the Encompass Championship being contested in Lake Forest and Glenview the past few years, golf fans have been able to watch the best in the game up close.

But what if the three top players in their prime played a local course in a two-day tournament to the delight of a few thousand spectators, the biggest names in the sport who ended up winning more than two dozen majors combined?

That’s what happened in 1963 when Arnold Palmer, Jack Nicklaus and Gary Player competed for a $50,000 purse at Glen Flora Country Club in Waukegan. Imagine Jordan Spieth, Dustin Johnson and Phil Mickelson gathering at Indian Hill for a battle, and you’ll get the idea.

The event was organized by the legendary Mark McCormack, once referred to by Sports Illustrated as “the most powerful man in sports.” His International Management Group turned those three golfers into wealthy celebrities thanks to the power of television and endorsements.

Recalls Dave Hiner, who boasts almost as many Glen Flora Country Club championships (20) as that trio does majors, “I followed them for the whole event. I remember they hit quite a few three woods when teeing off as Glen Flora’s fairways are very tight.”

At the par-70 course marked by those narrow fairways along with slick, undulating greens, Player’s rounds of 67 and 69 prevailed for first place (the course record is 65). On the last day, Nicklaus reached all 18 greens in regulation but could only manage a 70.

Hiner played a round with Player before the tournament that weekend.
“He was very kind to me and asked questions about the course, such as how the greens broke, yardage marker accuracy, and the like,” says Hiner, a Glen Flora member since the Eisenhower Administration. “This was a practice round so he hit two or three balls on some holes. He probably was two or three under par.
“Some years later I ran into Mr. Player at another course. We visited briefly, and he talked about having played at Glen Flora and especially remembered our seventh green — which is quite memorable.”

The course today, built in 1911, is much the same as it played a half century ago. That seventh green is as tough as ever, almost like a miniature golf course with its two small hills causing putting havoc. The ninth hole is an uphill dogleg that offers a sharp test for amateurs, and one needs a perfect tee shot over water to reach the par-three 11th.

With today’s great golfers in no need to supplement their eight-figure income, the chances of a similar match occurring in these parts is as likely as me firing a hole in one. But during one memorable weekend, the best in the game captivated the area. Says Hiner, “It was very exciting for the members of Glen Flora and for the city of Waukegan. I enjoy recalling that time.”