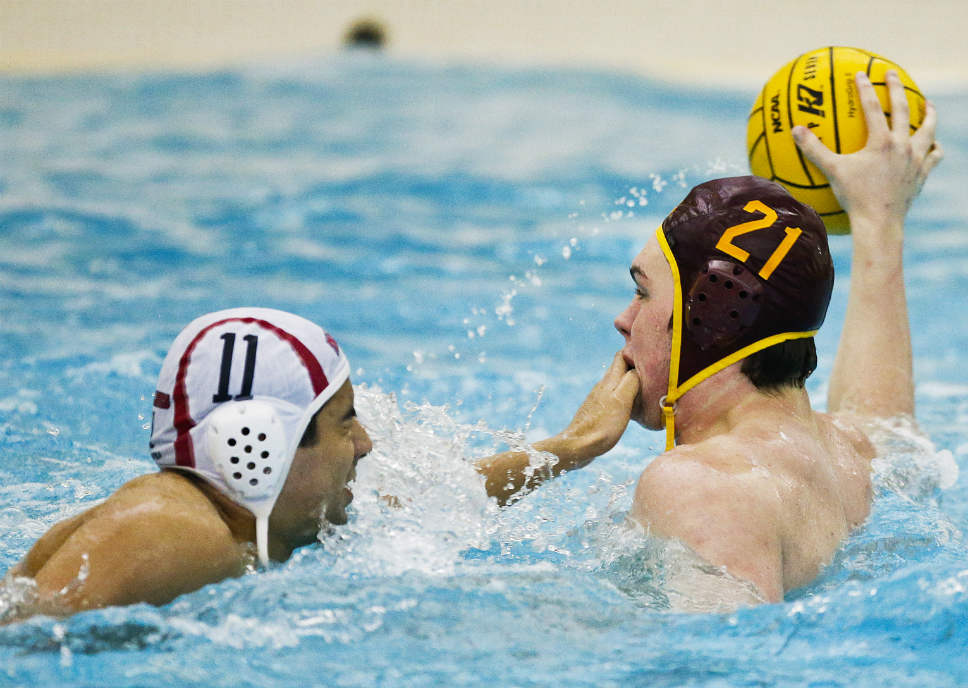 Alex Grant climbs out of a swimming pool, chlorinated droplets of water sliding off his body and sprinkling a deck. He walks toward his team’s bench. He hears something from the stands. Gasps. The New Trier High School water polo player hears gasps.

They are coming from parents.

Grant’s body looks scratched, bruised, splotched. It appears the Trevian had just lost a contentious battle with flying cue balls and thorny shrubs. Claw marks from opposing players’ nails adorn various parts of his upper body. Some call them rake marks. He had also been elbowed and kicked and grabbed.

Just another day at the (watery) office, a water polo player, boy or girl, will tell you.

“It’s a physical sport, no question,” Grant, a 2015 NTHS graduate and the Trevians’ leading scorer (122 goals) this past spring, says. “You have to adjust to it, deal with it, especially since 90 percent of the physicality takes place underwater, near the ball and away from the ball. Refs can’t call everything. Refs can’t see everything.

“I’ll never forget, my freshman year, my first game. I’m going against a big guy, this huge guy. He must have been 6-foot-5, and I’m 5-11, maybe 130 pounds then. He had a beard and tattoos. He gives me this hard bear hug, right there in the water, and whispers, ‘Welcome to the big leagues.’ ”

The primary lure of water polo, for competitive swimmers, is the sport’s setting. After spending months swimming lap after lap after lap to prepare for races, the swimmer gets to exhale a bit, gets to compete in familiar water and play around … with a ball. Fun times. Polo is fun. Swimming is grueling work. But polo players find out, in a hurry, that the water sport with the ball is far from easy and nothing like those get-togethers with a few friends at a pool party. Competitive poloists have to tread water. They have to sprint, stop, tread some more. They have to fight for position, constantly, and attempt to shoot or pass a slippery object — all while trying to ward off the relentless will, and oscillating limbs, of an indefatigable defender.

“Water polo,” New Trier senior-to-be Michael Krueger says, “is a combination of a swim meet, a wrestling match and a chess match. A coach told me that freshman year, and he was right, spot-on. You have to swim hard, handle the physical challenges of the sport and outsmart your opponent. I was terrified, at first, when I realized how different varsity water polo is compared to frosh/soph water polo, how physical it is. I’m huffing and puffing, getting clawed, getting hit. My fear, though, went away when I looked up at a scoreboard and saw my team was winning.

Loyola Academy players won the boys state championship in 2014. The New Trier girls team finished runner-up at state in May. The New Trier boys team reached a state quarterfinal in May. The players endured bumps and bruises and lost blood along the way. They also showed, in some cases, incredible restraint in the heat of battle in water, steely and impressive resolve to move on, to keep swimming, even after having sustained a series of shots to the ribs or knees to the hamstrings. The temptation to retaliate to the cheap shots — and hope the refs are either looking elsewhere or won’t be able to see through the splashes and chaos of one-on-one scrums — must be an ever-present one.

“High school kids, they take getting hit or getting kicked personally,” Glenbrook South High School boys coach and former Highland Park High School water polo player David Lieberman says. “It’s sometimes hard for them to hold back. When I was 23, 24 years old, I saw one of my players throw a punch during a game. I yanked him out of the pool and out of the game, right away. I had to set a tone. My message to my players then, as it is now, was, ‘Don’t ever retaliate.’ ”

The best way in the world to respond to any kind of violent act in the exhilarating sport is well within the rules. It is three-pronged:

No punches, no syllables uttered.

“Our coach [New Trier girls coach Matt Wendt] always told us, ‘Be the bigger person,’ ” recent New Trier graduate and Mercyhurst University-bound Stephanie Jodloman says. “There’s no need to hurt somebody underwater if you had just been hurt. Beat that person, that team, by scoring a goal. The physicality … it’s part of the game, a big part. I’ve gotten out of the pool, with blood [from scratches] running down my back. It’s part of the game. I still love the sport. I had been swimming all my life when I decided to give water polo a try my freshman year; I wanted to play a spring sport.

“I couldn’t be happier with my decision to play it. I can’t wait to start playing it in college.” 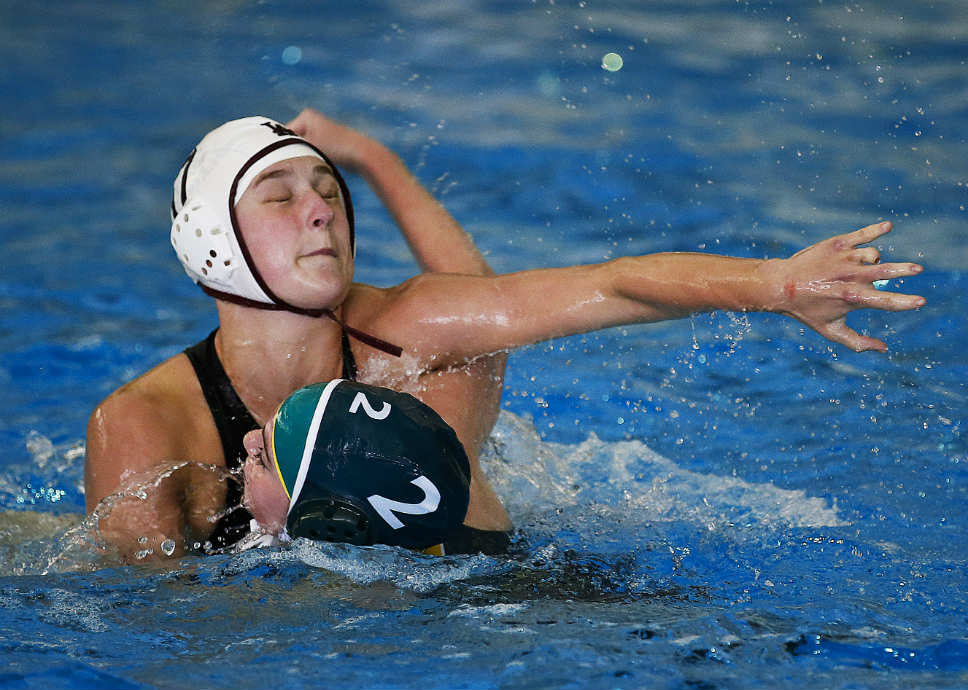 Loyola Academy’s Claire Voss (top) gets all tangled up with Glenbrook North’s Lindsay Fraser during a girls water polo sectional semifinal in May. Photography by Joel Lerner

“I’ve seen people lose teeth, get black eyes,” Saleh says. “It can get incredibly physical, as physical as hockey players get in front of a goal. There’s grabbing and pulling and doing whatever you need to do to get in position for a pass or a shot. Do you know how hard it is to fight for position while treading water?

“The older I got, the more physical the sport got. Kids get stronger, faster. The sport gets tougher. My players … they impressed me with their sportsmanship, all spring. They kept their heads on straight, kept their cool in the middle of some rough games. It’s a small community, water polo players. It’s like they all know each other. They also respect each other.”

Spencer Moore, a 2015 Lake Forest High School graduate, played two years of varsity water polo for Scouts teams. He stands 6-feet and weighs 190 pounds, smaller than an ocean liner but bigger, much bigger, than a kayak. The contact associated with water polo, especially the underhanded kind, bothered him at first, frustrated him.

“I struggled with that,” the University of Michigan-bound club water polo player admits. “I struggled to stay under control. I eventually realized, you have to accept that it’s a part of an extremely competitive game. Hockey guys get crushed into boards. There are massive hits in football. You know what? Hockey players and football plays get back up and continue to play and compete after those incidents. Water polo players, we have to have the same mindset.

“If spectators saw what goes on underwater,” he adds, “they’d be shocked at the physicality. It’s a great sport, though. Parents should not be afraid to have their kids give the sport a try. Parents should trust that the coaches and the referees will do their jobs.”

A water polo player, some 20 yards away from the ball, elbows and kicks and grabs a foe, all of the action occurring underwater. A whistle does not blare, in part because the referees are paying close attention to aggressive moves closer to the ball.

“I respect referees, definitely respect them,” Glenbrook South senior-to-be Peter Dales says. “It can’t be easy what they do, with all the things that are going on during a games. There’s a difference between physical play and dirty play, and it’s up to referees to know it and make the right calls. What goes on above water is nothing like what goes on underwater.”

What goes on above water is PG-rated stuff. What goes on underwater is not kid stuff, especially for kids not accompanied by an adult. 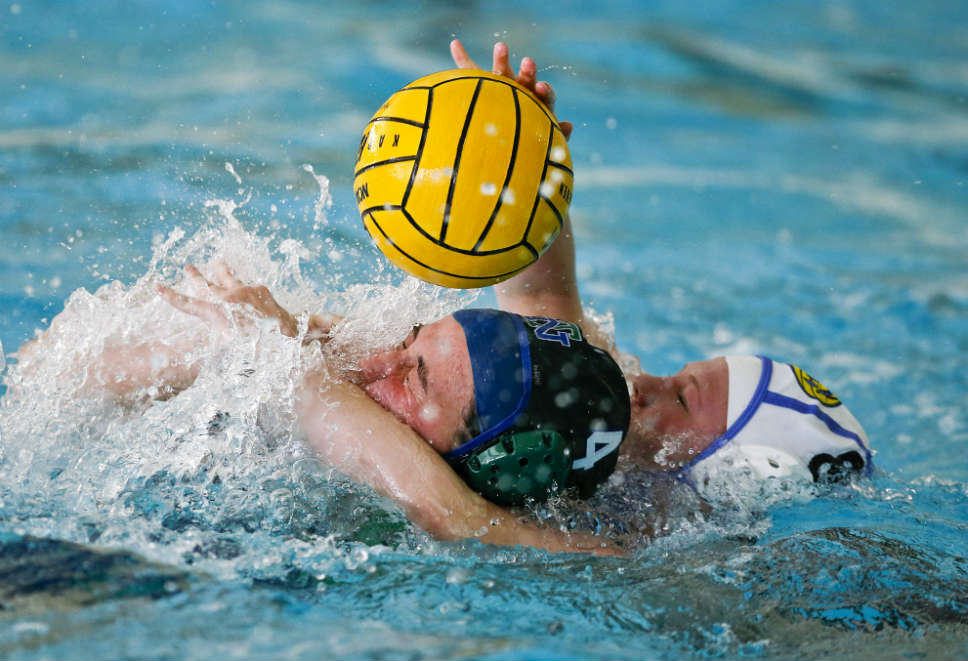 Wendt, New Trier’s girls coach, roamed atop pool decks as a water polo referee for five years. He says the most critical time of the game is the first quarter, a stretch when the players get a good feel for what will be called, or not called, for the rest of the 28-minute tangle.

“It is important for a referee to take control of a game early, so that the game doesn’t get out of control,” Wendt says. “That’s why refs tend to call a game a little tighter at the beginning. If a referee doesn’t take control, a game could get ugly fast. Safety is the No. 1 concern in water polo, as it is any sport at the high school level.”

Proof: referees check the nails, on all 10 fingers and all 10 toes, of each player before the start of every game. A talon too long? The player has to clip it and pass a second inspection before being allowed to play. Despite the nail checks, players still sustain rake marks on backs and arms and shoulders and torsos, temporary and haphazard tattoos.

“You usually get those marks when you’re in transition,” Moore says. “They’re cheap. You never want to see cheap shots in water polo, in any sport. Here’s what it boils down to: don’t take the physicality of the sport to an extreme level and do your best to contain your composure. Players have to remember that. If I get jabbed several times during a game, I accept it each time. You have to keep swimming. You have to play the sport the right way.”

New Trier’s Krueger says his coach, David Rafferty-Flatter, senses when a Trevian is nearing a breaking point during a game. The sense prompts Rafferty-Flatter to act. The coach motions to the agitated player and orders a substitute to enter the pool.

“Our coach is really good at recognizing when it’s time to sit a player down and make that player take a couple of breaths on the bench,” Krueger says. “Everybody in water polo reaches [that breaking point], or comes close to it.”

How tough are water polo players? How coveted are they?

Wendt recently read a piece about the United States Navy SEALS. He learned the SEALS like to recruit two kinds of athletes.

“Triathletes,” he says, “and water polo players. Their pain tolerance is high. Players in our sport take a lot of punishment, and they don’t always get rewarded for going through that. You’re in the water, treading water, and a person is all over you, bumping you, trying to upset you … it’s challenging. It takes a certain demeanor, a strong and patient one, to be a water polo player.”