Just as the topic of fair housing has moved to the forefront of a national conversation about race relations in the U.S., the Winnetka-based nonprofit Open Communities will kick off a grassroots movement called The Justice Project: The March Continues, to be held at Justice Day on July 26 on the Winnetka Village Green.

The event marks the 50th anniversary of Dr. Martin Luther King, Jr.’s address to nearly 10,000 people on the very same Winnetka Village Green in the summer of 1965. The event is entirely run by volunteers and Open Communities’ goal is to inspire north suburban residents to create more welcoming, inclusive communities.

“All of this is really the force of volunteers that care about this mission,” said Jes Scheinpflug, director of communications for Open Communities.

Open Communities finds its roots in the Civil Rights movement of the 1960s. At that time, a group of women organized in the hopes of raising their children in a more diverse environment on the North Shore. Inspired by the Mississippi Summer Project, the volunteers organized The North Shore Summer Project that sought to convince realtors to sell and market homes on a non-discriminatory basis on the North Shore. In the summer of 1965 Martin Luther King, Jr. visited Winnetka and spoke about fair housing and welcoming communities.

The North Shore InterFaith Housing Council was an outgrowth of that project, founded in 1972 to promote fair housing in the northern suburbs. In 2012, the nonprofit changed its name to Open Communities and broadened its message to include more than just fair housing, but also to promote inclusive communities through education, advocacy and organizing. Open Communities serves 16 north suburban communities, ranging from Lincolnwood in the south to Highland Park in the north.

“We have come a long way, but we have a lot more work to do,” Scheinpflug said. 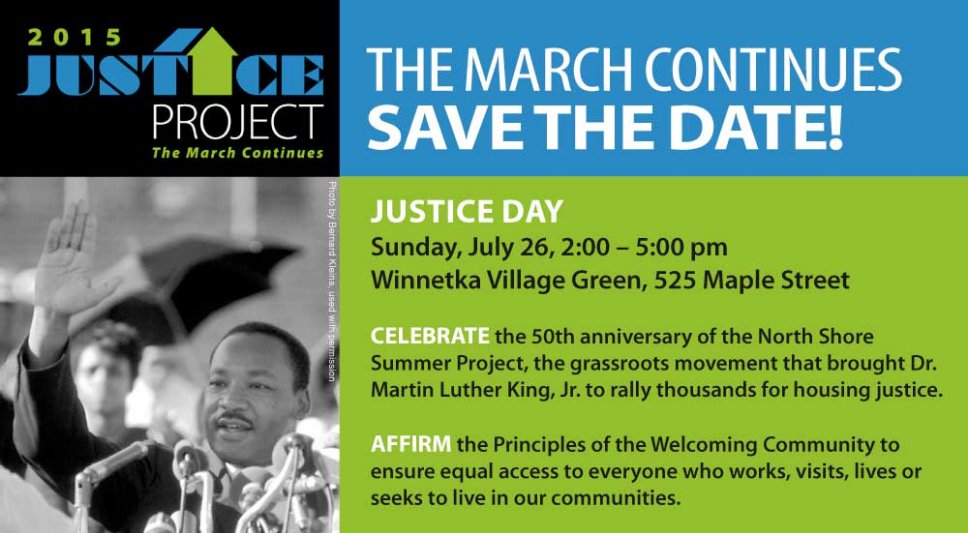 Organizers view Justice Day as a call to action, encouraging people to sign up for “justice teams” that will ultimately address relevant issues in north suburban communities. The event will honor North Shore veterans of the Civil Rights movement, and Hilary Shelton, Washington bureau director for the NAACP will be keynote speaker. “We wanted to acknowledge our history on the North Shore. There were civil rights activists here,” Scheinpflug explained.

While the event honors the history of activism on the North Shore, organizers emphasize that the event is about taking action in the 21st century.

“We are honoring the past and mobilizing for the future,” Scheinpflug said.

Justice Day will be held on July 26, 2:00 – 5:00 pm on the Winnetka Village Green. Activities include arts and crafts, gospel and folk music and food. For information go to www.justiceprojectcontinues.org.