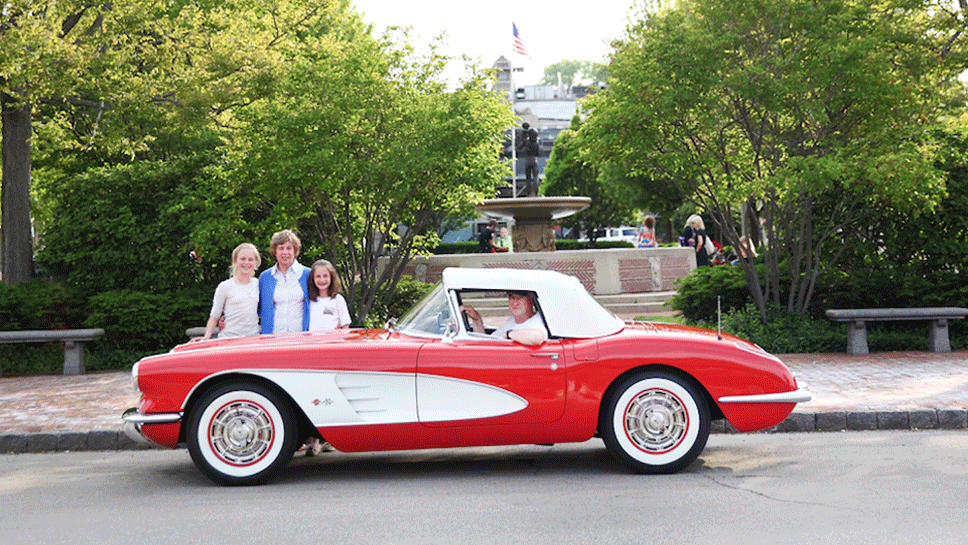 After Martha ReQua lost her husband Chuck to melanoma, she vowed to continue on with his popular Market Square Car Show, and today is helping advance the mission of the Skin of Steel foundation that is on the cusp of a huge breakthrough.

When Chuck ReQua lost his battle to melanoma in the summer of 2004, it was just weeks after the annual Market Square Car Show he produced in Lake Forest each July. As the owner of Memory Lane Motors on Route 176, ReQua’s collection of classic cars was a popular draw for hundreds of visitors. So when his widow Martha was approached to keep it going the following year, she knew the show must go on.

“I said I would do it if I could make it a fundraiser for melanoma research. It’s grown every year since,” she says proudly. ReQua admits she’s “not a car guru, I was just married to one,” and credits the show’s success to partnerships, such as eventually teaming up with Ray Sorenson of Lincolnshire’s Blackdog Speed Shop who now produces the event by assembling individual auto owners.

The turning point for ReQua though came in 2010 when she met Susan Steel, a melanoma survivor and founder of the Skin of Steel Foundation, a Glenview-based nonprofit that is committed to advancing the education, prevention and research behind skin cancer. ReQua read an article about Steel’s groundbreaking medical decisions in the Tribune and was immediately drawn to her. “She’s a phenomenal woman,” ReQua says. “She’s such an advocate for herself and a true survivor.”

Unlike ReQua’s husband who quickly passed at the age of 61, just months after the cancer had metastasized in his brain, Steel has been living with the disease for 10 years largely by traveling throughout the country to participate in advanced and risky clinical trials. “Every trial I go on, I sign 30-40 page waivers,” she admits, but it has not been for naught. “When I had my first prognosis, the surgeon called me up in tears and said I had less than 6 months, and since then I’ve been repeatedly told I was done. But you can defy expectations once you know it’s possible.”

The reason she is surviving, she says, is because she’s on the cusp of the latest research, “and I have access to it,” the reason why she is now also fighting to create the country’s first Melanoma Tissue Bank that will utilize fresh-frozen tissue to allow researchers to study both DNA and RNA to better predict susceptibility and provide a more strategic approach to personalized medicine. Steel and her foundation believe it will be the key to the cure and provide melanoma cancer with the same advances that breast cancer and prostate cancer have enjoyed, both of which have similar Tissue Banks in place.

The idea for the Bank comes at an opportune time as melanoma is the fastest growing cancer in the world, particularly at alarming rates for younger generations. Skin Of Steel says that cases of pediatric melanoma have increased by 30% in the past 10 years and it is one of the most common causes of cancer for adults 25-29 years old. “Sun safety really has to start from the time of birth,” says Steel who believes she contracted melanoma from both a genetic and ethnic vulnerability (her northern Italian and Irish background are two of the most susceptible groups) and spending entire summers on the beaches of the Jersey Shore where she grew up.

As such, Steel encourages the use of sunscreen from 9 a.m. to 4 p.m. and annual skin checks at the doctor. ReQua also hopes to hand out sunscreen samples at the Car Show this year. “Given the environmental factors, my guess is that the situation is going to get more difficult before we resolve it,” says Steel, a fact that encourages her to keep pushing forward for the Tissue Bank.

In a huge step, Skin Of Steel has developed a consortium across the country that will involve researchers and oncologists at the University of Pittsburgh Medical Center, Northwestern University, California Pacific Medical Center and Oregon Health & Science University. “Because we were willing to step up and raise the money they got serious about participating,” she says, noting that an initial goal of $3.5 million has been largely supported by individual donors and a series of exposure events like the Market Square Car Show, which raised $10,000 for Skin of Steel in 2014.

“The research has come so far in the last ten years that Susan has been fighting it, you just think, ‘My God, if we’d only been able to go a couple more years, maybe there would have been something that would have helped Chuck,” says ReQua. “If I can help just one person or make them aware so they don’t have to go through the pain I did in losing a spouse, that’s why I keep doing this. I keep thinking it’s going to make a difference in somebody’s life.”