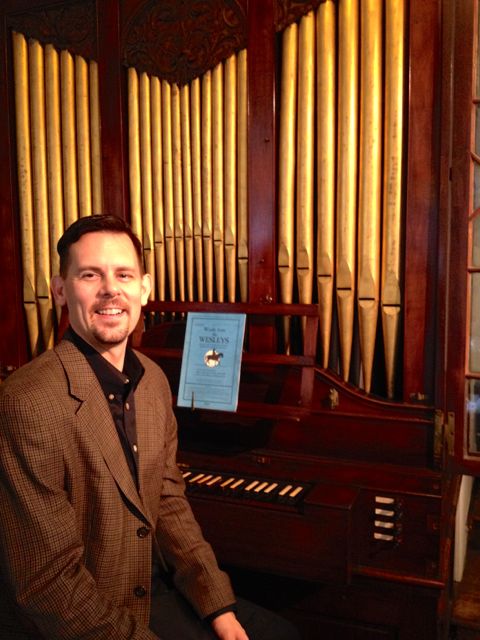 LAKE FOREST – After months of review, discernment and prayer, First Presbyterian Church of Lake Forest is pleased to announce that Dr. Barry J. Wenger will be joining the staff as organist and bell choir director starting Aug. 15.

“The committee was very impressed with Dr. Wenger’s education, musical expertise and experience,” said Mary Watanabe, chair of First Presbyterian’s Music Search Committee. “But just as important, the committee was moved as he shared his faith journey. [Wenger] is humble, gracious, calm and highly organized. He also has a great sense of humor and a long history of successful collaboration with both staff and volunteers in a church setting.”

Prior to First Presbyterian, Dr. Wenger was the principal organist at First United Methodist Church at the Chicago Temple where he provided music for four services each week and accompanied the Temple Choir. Previously, he was the organist and director of worship and music at Central United Methodist Church, Kansas City, where he directed six choirs (choral and bell) and played the 1967 Casavant, Op. 2731. Casavant refurbished that instrument under his tenure and guidance. He was also a staff organist at the Community of Christ Headquarters in Independence, Mo., for 13 years, playing in recital and worship on the 114-rank Aeolian-Skinner organ and the 102-rank Casavant tracker organ.

“He will be quite at home in First Presbyterian’s choir loft with our newly refurbished 1973 Casavant Frères, Opus 3160,” Watanabe added. “He is also a skilled pianist and loves to lead the congregation in enthusiastic hymn singing.”

Leading in worship is just one of the things that Dr. Wenger looks forward to, saying, “I am joyful and excited to work closely with Dr. Tom Tropp, director of Music and Arts, and the pastoral staff to help create meaningful worship together. I look forward to meeting church members, especially those in the choirs, bell choirs and musical ensembles.”

He also added his appreciation for his predecessor, Jill Hunt, who is retiring after 20 years of service at First Presbyterian: “I am so thankful to Jill Hunt and her music ministry at First Presbyterian. Her dedication to the instrument is a gift and I appreciate so much that it is in top shape for me to follow her in the role of organist.”

Along with playing the organ during weekly services, Dr. Wenger will be leading and collaborating with the numerous bell choirs at First Pres: the Chancel Bells, Lakeminster Ringers and the Youth Bell Choir.

“One of the reasons I accepted the role is to get back into directing choirs—bell choirs specifically,” Dr. Wenger explained. “I have missed that very much, from selecting music and preparing it, to working with dedicated musicians to share that music for the glory of God. I am very excited to be able to work with the bell choirs at First Pres and hope to bring musical opportunities to youth and children, as well as through bells and chimes.”

He has performed throughout the Midwest and South, and also maintains a private lesson studio where he teaches organ, piano and harpsichord. In 2013, he toured England with the Chicago Temple Choir and played the Charles Wesley’s pipe organ. Dr. Wenger is a member of the American Guild of Organists (AGO) – Chicago Chapter, and has held many positions in the AGO including dean of the Kansas City Chapter and organizer for its annual Bachathon 6-hour concert.

A champion of new music, Dr. Wenger has premiered new works for organ; choir and organ; harp and organ; and cello and organ. He was requested to perform in a recital honoring the new president of Garrett Evangelical Seminary and, most recently, he played a new work for cello and organ for the AGO Chicago Chapter. This fall, he has been invited to play on the Loyola University Concert Series at the Madonna d’ella Strada Chapel in Chicago.

“We are so delighted that Dr. Wenger will be sharing his gifts with us and our community,” said Rev. Dr. Christine Chakoian, senior pastor at First Presbyterian.

Submitted by First Presbyterian Church of Lake Forest
Our mission at First Presbyterian Church of Lake Forest is to send inspired and well-equipped followers of Jesus into the world, loving and serving God in their daily lives. We invite you to join us in these resilient Christian practices: worship, learn, connect, serve and invite. Find out more about our worship services, study groups, mission outreach and fellowship opportunities by visiting our website at www.firstchurchlf.org or calling us at (847) 234-6250.