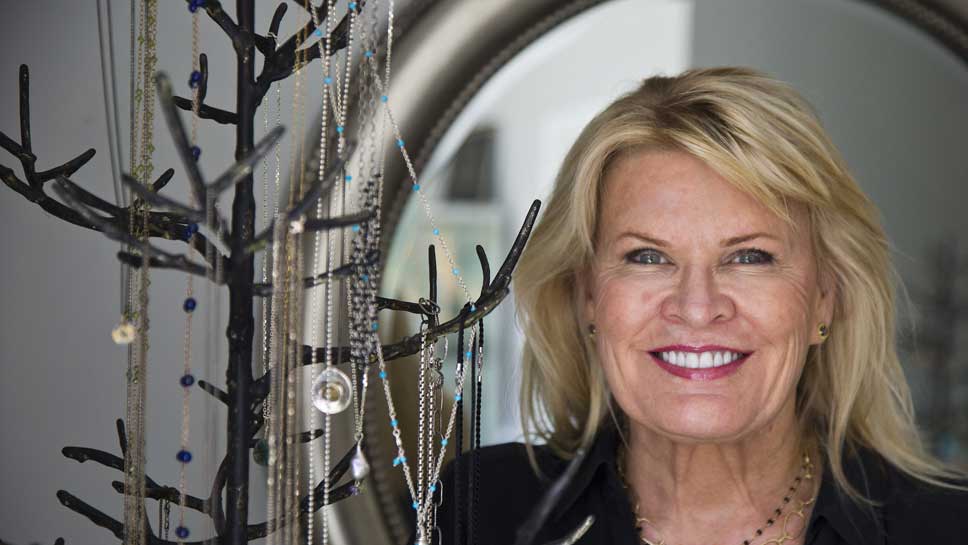 Mary Mowry runs her jewelry studio out of a quaint stretch of storefronts that dot Scranton Avenue in Lake Bluff.

From the outside, the building is painted sky blue. Inside, her studio is well-decorated, though nothing here is perfect — just as her “Imperfect by Design” tagline for her craft suggests.
“A lot of times I’ll form a piece and then it looks too perfect, and I have to go in and add something,” she says. “That’s my artistic license. I started making my own jewelry because I didn’t want what everyone else had.”

Mowry began her artistic career as an oil painter, specializing in en plein air pieces. Five or six years ago, she became interested in gemstones and decided to try her hand at jewelry-making. What started as simply messing around with a butane torch (the gas for which she purchased at Williams & Sonoma) has, just a few years later, become her primary occupation. “It’s something I can spend 12 hours a day doing,” says the owner of Mary Mowry Design. “You get into it and you kind of zen out.”

Mowry’s prototypical piece is an imperfectly shaped charm, with a silver or metal base, topped with gold or the occasional diamond. Her signature, she says, is the small granules she paints on in various shapes — a tree, a cross —using an ancient chemical solution. They can be commissioned, for anything from a wedding anniversary to a birthday gift, or purchased in her shop, where they can cost anywhere from $350 to $4,000. Normally, she has as many as 10 projects going on at once, all of which are created through a combination of artistic vision and improvisation.

Talking to Mowry, her unconventional methods and tireless work ethic do not come as a surprise. She seems to stumble around eloquence until she lands on it, leavening an extant beauty to the surface for all to see. So far, it’s working: in just a short time, Mowry’s been invited to exhibit her work at several shows, including the American Craft Expo in Chicago, where she displayed her pieces side-by-side master craftsmen.
In part, her achievements are attributable to a background in the arts.
“When I make jewelry, it’s just like painting to me, except without the paint,” she says.

It could also be in her genes. Mowry’s father was an inventor, who was no stranger to welding tools and the sort of technical acumen necessary in jewelry-making; today, he’s his daughter’s biggest fan.
More likely, though, Mowry owes her success to her passion for the craft — a genuine admiration for her peers and willingness to pick up new skills.

“I’ve gotten here because of this drive in me to do it,” she says. “That’s the fun part about it all.