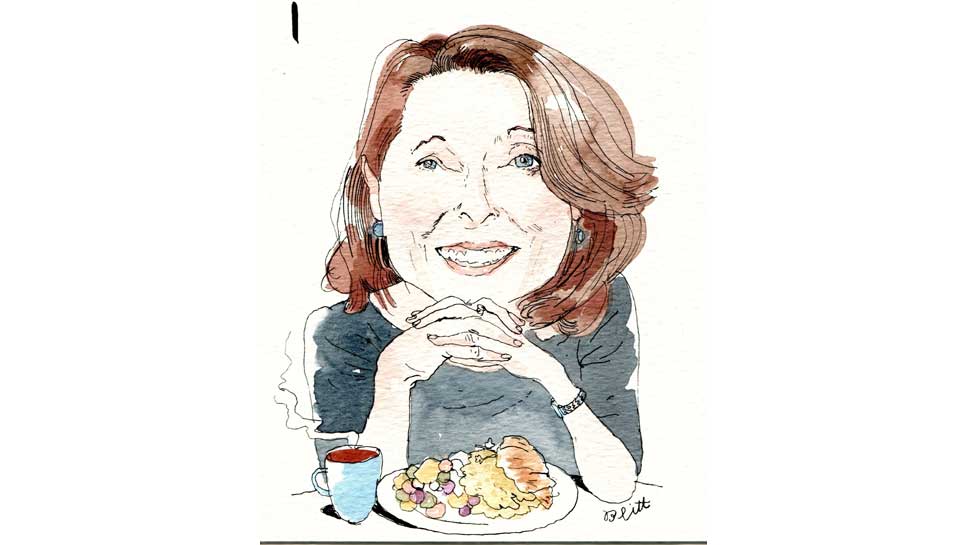 Beowulf was no slouch. The supernaturally strong hero bests both troll and dragon alike on his adventures.
But imagine the Geats’ champion boarding a longboat for the Danish land to fight that monster Grendel, going ashore in his resplendent armor and being denied entry into the kingdom because, unfortunately, his monster-fighting resume wasn’t exactly what King Hrothgar’s sentry had in mind when they posted the need for a hero.

We’ve all been there. One minute you’re impenetrable, confident that the job (or jobs) you’ve applied for has your name written all over it. The next moment you’re Swiss cheese, vulnerable. No one’s gotten back to you — how can that be? — and suddenly you don’t feel so bulletproof anymore.

Sheila Nielsen has heard it all, she tells me. I’m sitting down to breakfast with the career counselor and author of “Job Quest: How to Become the Insider Who Gets Hired” at Café Aroma in Winnetka. Nielsen orders a croissant with scrambled eggs, a side of fruit, and a kettle of hot water. When the kettle comes she reaches into her bag and removes from it a packet of black tea, taking it with sugar.

Her teabag illustrates a good point Nielsen makes in Job Quest. You would never say it was lucky —or an act of luck — that Nielsen just so happened to bring the exact tea she wanted this morning. No, it was preparation; an act of will even. Reasons very few give after they land a job.

Instead, they boil it down to three words: “I got lucky.”

“What this book does is it demystifies networking,” says Nielsen, “helping people learn how they can create some control over the search.”

Before she became a career counselor, Nielsen would’ve readily testified to the overwhelming amount of luck necessary to land a job. And while luck is a factor, it can be engineered to your advantage. She didn’t know the difference back then. Today, after counseling over 3,500 professionals and helping them find jobs or transition into new fields or industries, she does.

Nielsen grew up in the courtroom. Her uncle, Lowell Myers, was a deaf attorney in Chicago and advocate for the rights of deaf people everywhere. In the courtroom, Nielsen’s mother acted as his interpreter. Famously, Myers defended Donald Lang, a deaf mute charged with killing two prostitutes in 1965 and 1971. (In the made-for-TV-movie “Dummy,” Paul Sorvino portrayed Myers, starring alongside a stony-eyed Levar Burton as Lang.)

Accompanying her mother to these trials, Nielsen saw herself in a similar role — but opposite the courtroom, playing prosecutor to her uncle’s defense. Nevertheless he was an early role model, notes Nielsen; in whom she saw a person who created opportunity for himself wherever he went.

“He got into law school at a time when deaf people weren’t allowed,” says Nielsen of her uncle, who graduated second in his class from John Marshall.

Nielsen’s career had a similar trajectory. She received her master’s degree in social service from Bryn Mawr in 1973 and her law degree from Temple University’s Beasley School of Law in 1977, at a time when women accounted for only 33 percent of the class. After law school she worked as a criminal prosecutor: first in the state court of Philadelphia, then Chicago, and then as an assistant United States attorney where she tried hundreds of cases.

Shortly after the birth of her first child, Nielsen went to work for herself. She made a midlife career change, forgoing law (though never completely) to develop her own counseling and coaching business, Nielsen Career Consulting. In 2011, the American Bar Association published her first book, “Job Quest for Lawyers: the Essential Guide to Finding and Landing the Job You Want”. The second Job Quest is tailored to professionals and new graduates of most, if not all, fields.

Both of Nielsen’s books are populated with the characters you would expect in a work of fantasy: knights, wizards, ogres, and dragons. But each serve as a valuable analogy for the job quest writ large. Knights and wizards can be mentors, advisors, or just willing to help other people enter the workforce. For Nielsen and countless others, she tells me, that person was her father-in-law, A.C. Nielsen Jr., who presided over his family’s company that is so well known today for television ratings.

Says Nielsen, “When you shift your mindset to the idea of a quest in which you’re the protagonist, you’re creating the story, and you have to use all of yourself: your sense of humor, your ability to help other people — putting it in that context, that’s when people start to do so much better.”

Standing in front of you and the glimmering glass castle of your would-be employer, these days, are terrifying gatekeepers, firewall breathing dragons, endless dungeons where resumes go to be forgotten and die. But even with such a heavy armada arrayed against you, there is hope.

“Think of it like this: everybody that you meet is this treasure chest,” says Nielsen. “Imagine at the bottom of the sea there’s this Spanish galleon and you’re the deep sea diver looking for a treasure chest. You open it up — it could be doubloons and treasure, or it could be dead fish and sand. You don’t know.”