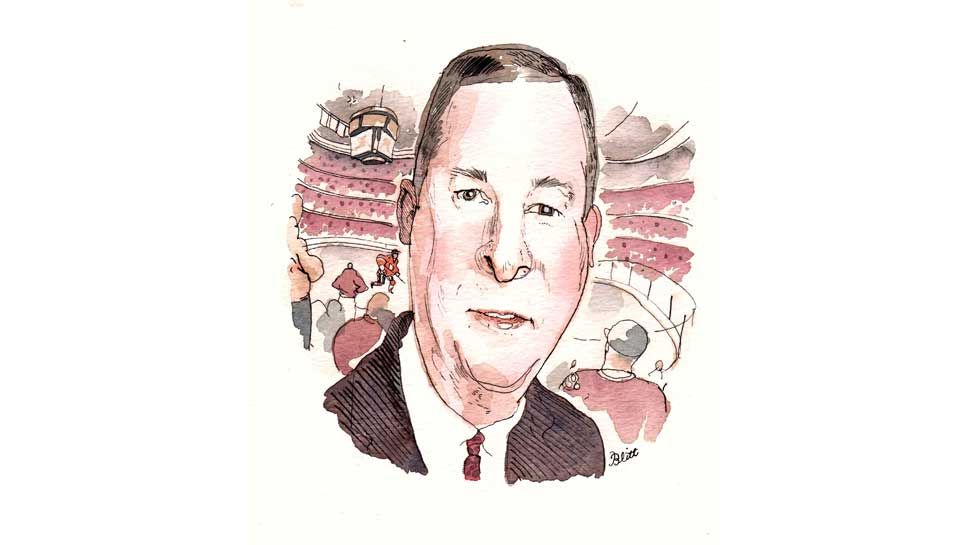 As Greg Hanrahan, dressed in a dark suit, walks through the luxury suites at the United Center on a recent weekday, he notes the challenge of keeping them filled.

“The product on the ice or on the court can change on a dime,” says the senior director of premium seating at the Chicago arena. “The coach can be fired.”

Case in point: an hour or so after that comment, a press conference a few levels down revealed the Chicago Bulls had ousted their coach, Tom Thibodeau.

Though won-loss records are out of Hanrahan’s control, the suite experience is not. And his rate of success is strong. About 20 percent of charter suite members still remain since the building opened in 1994, suffering through the Tim Floyd era and many hapless Chicago Blackhawk teams.

“I believe our service kept them renewing with us,” says the Lake Forest resident, whose 180 suites all enjoy waiting lists. “People demand, as they should, superior service.”

Though he’s been through plenty of quiet Mays and Junes on West Madison Street, that hasn’t been the case this year. With the Bulls making the playoffs and the Blackhawks reaching the Stanley Cup, Hanrahan has experienced many late nights chatting with suite holders and ensuring all runs smoothly. Though he’s heard plenty of deafening roars this spring, the United Center on this day is quiet, with no sign the Blackhawks had beaten the Anaheim Ducks the night before. Hanrahan points with pride how clean and fresh the stadium is, belying its busy 21-year history.

The suites, which will all be renovated in 2017 (sofas will likely be out, as fans prefer to move around during games), are far from one size fits all. Theater boxes with four seats, private coat closets and elegant dining offer the ambiance of the opera, while the 11,000-square-foot BMO Harris Club possesses three bars, a pool table and often a large number of children wandering about.

Suite holders must buy all Blackhawks and Bulls home games and receive the option to purchase concert tickets (U2 will play there five times this summer). Depending on the number of seats acquired, suites can cost anywhere from $50,000-$600,000 annually, with leases running three to five years.

Says Hanrahan, “I put marriages together. I help my customers divide their costs with others so they can stay longer. It costs more to bring in a new customer than to keep an old one.”

After graduating from Beloit College in 1986, where he played basketball, Hanrahan was offered a job at Lake Forest High School, his alma mater, to teach and help coach for about $30,000. The Bulls presented him the opportunity to sell season tickets via cold calls in the old Chicago Stadium at a low base salary plus commission.

He chose the latter — but sometimes wondered why.

“People hang up on you and yell at you as you’re trying to sell them a bad seat in the second balcony,” Hanrahan recalls. “But you need that foundation of experience to do well in business.”

As Michael Jordan (more on him later) started bringing championships to town, ticket sales ceased to be a problem. Jerry Reinsdorf even flew Hanrahan and his family to away finals games in Los Angeles and elsewhere. But when the United Center opened, it featured 216 luxury suites. The Stadium had zero.

Hanrahan was tapped to sell the premium seating. A guy who had won the lottery bought a suite. The ones that ring the top of the United Center were all sold before ground was broken (in fact, the money generated by suite sales allowed construction to begin).

When the United Center hosted the Democratic National Convention in 1996, Hanrahan — son of former Republican Congressman and Ford Administration veteran Robert Hanrahan — was forbidden to enter suites for the first and only time.

“I literally never got to see what was going on,” he recalls. “I joke that it was because of my Republican background.”

Though other stadiums in San Francisco and Miami feature high-tech devices in suites, the United Center has resisted the trend.

“We’ve tested these things. The gadgets don’t work in Chicago — people want to watch the games” he says.

Back to Jordan, In 1981, Hanrahan played against him in a game at a Pennsylvania basketball camp. The future Hall of Famer dunked over the future luxury suite guru.

“You don’t remember me from Adam,” Hanrahan told him. “But you dunked on me.”

Said Jordan, “I usually do.”

A slam dunk occurred when Hanrahan was poised to introduce his children to Jordan after the NBA great retired. Upon seeing him, Jordan ran over and gave him a big hug.

Says Hanrahan, “They finally believed I knew him.”