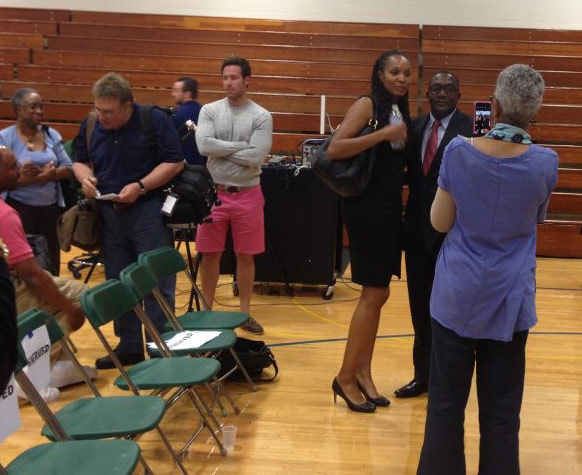 Dr. Chala Holland posing for a photo after the school board meeting.

Despite residents’ objections, the Lake Forest Board of Education for District 115 voted 6-1 to approve a three year, performance-based contract for Dr. Chala Holland as principal of Lake Forest High School at a meeting held on June 9. Board member Ted Moorman was the only dissenting vote.

The LFHS West Campus gymnasium was packed with residents seeking resolution of an issue that has sparked controversy since it was leaked in mid-May that Dr. Holland was the administration’s top candidate. While Superintendent Michael Simeck opened the meeting with positive remarks about the school district’s performance, tensions rose quickly during the public comment period over the nomination of Dr. Holland when dozens of residents voiced their objections.

The meeting was held in the LFHS West Campus gymnasium rather than its regular board room to accommodate the hundreds of people who showed up for the meeting. Dr. Holland was present in the audience.

She is an assistant principal at Oak Park And River Forest High School. Much of the controversy in Lake Forest stems from residents’ backlash against Dr. Holland’s views expressed on a website for her consulting firm Holland Educational Consulting Group (HECG). The site was removed shortly after her candidacy was leaked, which also upset many people who wondered why the site was taken down so quickly. On the site, Dr. Holland promoted “de-tracking” and shared her view that tracking perpetuates racism in schools. On a Facebook post for HECG, she ran a photo of Malcolm X stating “Only A Fool Would Let His Enemy Teach His Children.”

During the public comment period residents voiced objections to a hiring process they viewed as flawed, asserting it lacked transparency. Many residents questioned whether Dr. Holland had a hidden agenda.

“What has never been answered to our satisfaction is why [Dr. Holland] wants to serve as principal of this community and why the superintendent thinks she is a good fit for this community. We are left to wonder given the views on her website and her attempts to cover them up, what is her agenda and what will LFHS look like under her leadership, said Tom Kienzle of Lake Forest.

Dale Miller of Lake Forest asked the board to share Dr. Holland’s resume with the community. “Could we pause just a moment and make the process transparent?” he asked.

Residents also objected to Dr. Holland’s written statements about white privilege in school systems, arguing she was not a good fit with the values of the community.

Noting that meritocracy and candor are community core values, one Lake Forest resident said, “the recent events that cause us to gather here in great number have shaken the confidence of this community as this superintendent has strayed from our core values,” he said.

Residents also questioned her qualifications, citing Dr. Holland’s lack of direct experience as a principal and work in lower-ranking schools.

“Why shouldn’t our students deserve a principal that is from a school that is in the top 50?” Amelia Bartholomew of Lake Forest asked.

Lake Forest resident Rob Rourke asserted the issues at hand weren’t about race but about experience and fit. “I want someone with a track record of having done it before. Not somebody who will learn the role as he or she goes,” he said. Rourke further noted that Dr. Holland has spent the last decade espousing goals to solve racial inequality by the removal of tracking systems that are in her view the byproduct of white privilege. “The positions of the Lake Forest community and the positions of the candidate are largely at odds with each other,” he said.

After a lengthy public comment period, the Board convened for over an hour in a private executive session to make a decision. When Superintendent Simeck re-opened the meeting he explained the board’s hiring process and attempted to address residents’ questions.

After posting the position on the international website www.edweek.com, a team comprised of representatives from every department in the school, administrators and parent representatives, conducted two rounds of interviews before narrowing the field down to Dr. Holland. The team then conducted a site visit at Oak Park River and Forest High School and met with “dozens and dozens of people there.”

He did not explain why an executive search firm was not used, though search firms have been used in the past.

Superintendent Simeck noted that the overwhelming feedback from references and others who have worked with Dr. Holland were positive. “She is an exemplary educator. She is a rock star. She is a rising star. You are incredibly lucky to find her,” he said, quoting from reference’s comments.

He further noted that Dr. Holland was attracted to the role because of the school’s dedication to socio-emotional wellness. Stressing her strong qualifications, Superintendent Simeck pointed to Highland Park, Glenbrook North and Vernon Hills as local districts that recently hired principals that were all previously assistant principals. He further noted that Jay Hoffman, a former principal at LFHS, was an assistant prior to taking that position.

While each board member lamented that the hiring process was difficult and mired in controversy, they overwhelming shared the view that Dr. Holland would make a positive contribution to LFHS.

“Dr. Holland strongly believes in social emotional wellness of the whole student and that he or she has access to the best education,” Diana Kreiling said. “After hearing both sides of this debate and armed with as much information as I can, I believe that my kids would be lucky and benefit in numerous ways to have Dr. Holland as principal of Lake Forest High School,” she said.

Ted Moorman was the only board member to vote no. He said Dr. Holland was a “strong candidate” but expressed concern that her previous experience was with a different type of educational institution with different needs and goals than LFHS. However, Moorman asked the community to show Dr. Holland support if she were hired.

“I ask the community to welcome Dr. Holland and stand behind her and make every effort to assist and aid her as she endeavors to serve the young adults of our community. To do less is to not serve our young adults and the community she will be serving.”