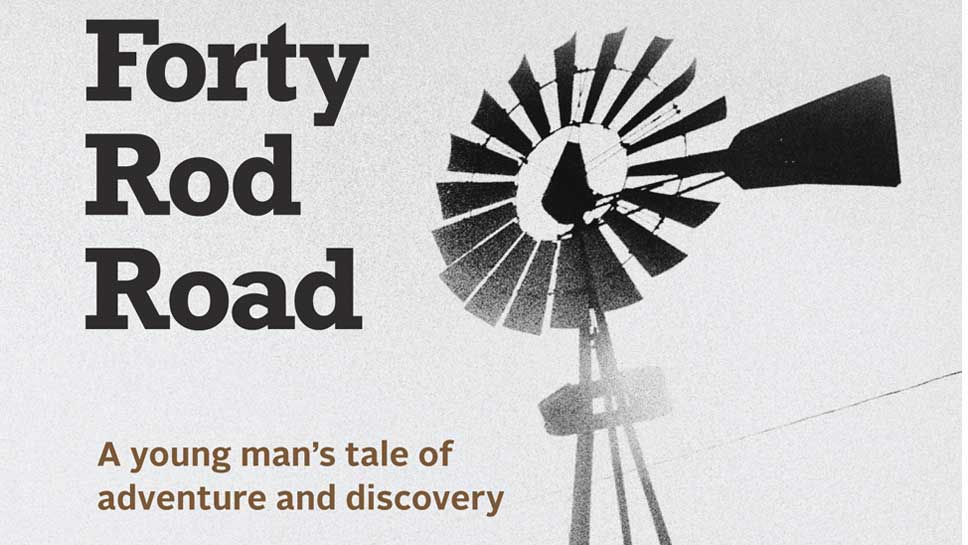 Forty Rod Road is a novel by Grove Mower, who enjoyed a residency at Ragdale.

During Grove Mower’s 10-day residency at Ragdale in 2013, he finished the first draft of his novel Forty Rod Road. After he returned to his Chicago home from the Lake Forest writing retreat, he opened his laptop.

Taken aback, he shouted to his wife Brooke — a portrait and commercial photographer — that he needed help.

“I had erased it all,” says Mower, an alumnus of Brown University and Deerfield Academy. He spent the next 10 days at the Harold Washington Library, rewriting from memory as best he could.

The resulting work should resonate with many North Shore readers who remember being vulnerable, naive college freshmen. The narrator of Forty Rod Road is a somewhat aimless veteran of Lake Forest debutante parties who wants to spend a summer working as a ranch hand in Wyoming, where a prep-school friend died in an accident. With humor and a keen eye for detail, a gripping story unfolds.

Parts of the book are true to Mower’s life. He headed to Wyoming the summer before sophomore year.

“You have these delusions of grandeur (about Wyoming). The ranch was a lot less than I expected,” he recalls. “At that age, there’s this leap from innocence to experience — it’s not all good. It’s painful.”

The father of two teenagers when he began the book, Mower wrote it because he hoped his children would read it.

Of course, in a perfect plot twist, they haven’t read it. Mower seems to understand.

Keeping journals for 20 years helped Mower — a financial advisor downtown — train for the writing life. He liked waking up at 5 a.m. and working on the book (“two or three hours would just disappear”). He shared the first draft with a number of readers, who agreed the story was solid but needed tightening.

Now, he’s involved with crafting two sequels. The 184-page Forty Rod Road (available at www.amazon.com) was published independently, and he’s shopping these new books to literary agents.  The second book will pick up where Forty Rod Road left off, returning protagonist Hank Chandler to Wyoming the following summer for a bit of Western justice. The third in the series will feature Chandler seven years later, more mature but still entangled with the goings on at Forty Rod Road.

Says Mower, “Forty Rod Road is a metaphor for those rough patches we have to deal with in life. Along the way we learn it is not the destination, it’s the journey that matters most.”