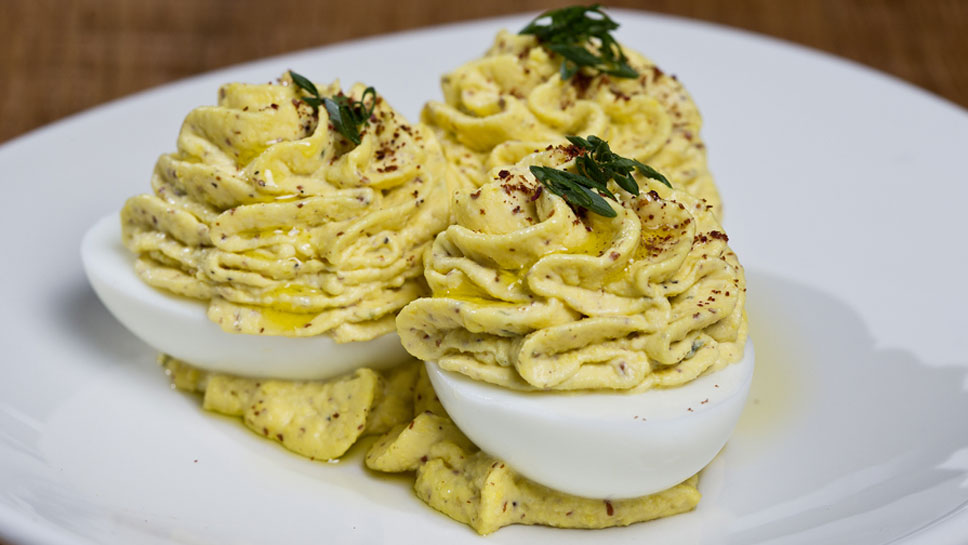 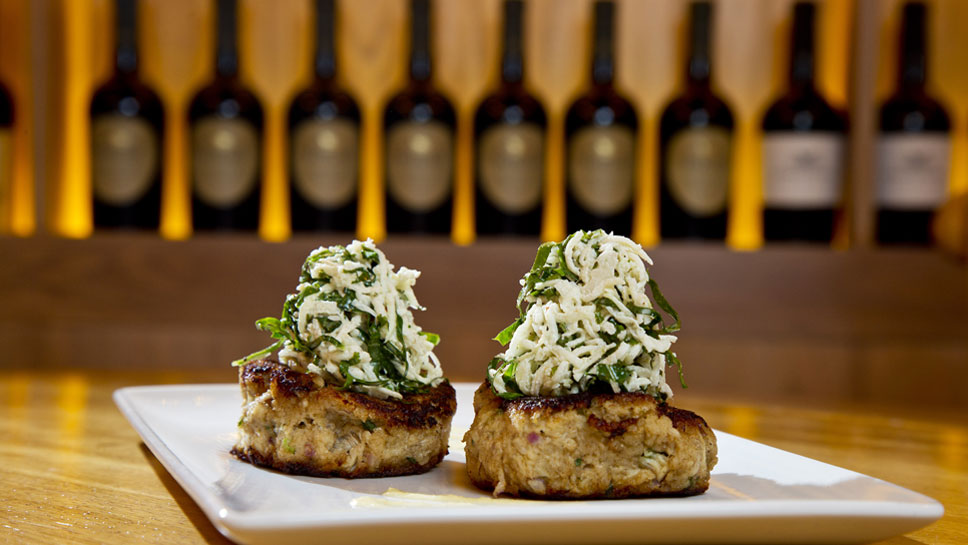 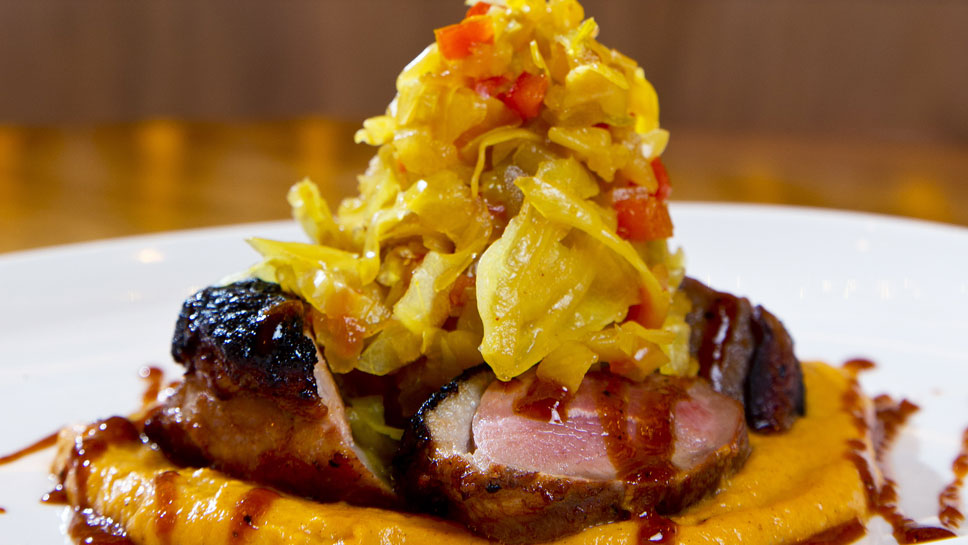 Named after the proprietors’ two-year old daughter, Mae Avery, Maevery’s Public House is a cool, modern space that brings highly curated flavors to traditionally casual dishes. The space is awash in golden light and designed to the nines, with substantial tables that feel like reclaimed wood, antique mirrors on the wall and ceiling, Chesterfield couches in the bar, and a wall of wines alternating between a single brand of reds and whites as a nice visual wall feature rather than drink storage.

We started with the Deviled Eggs. Pretty much because we’d never seen them on a dinner menu before, so they had to be there for a reason. Surprisingly sophisticated, the Deviled Eggs are a carefully constructed palate of execution playing with expectation. They’re grounded in a mild mustard tang and topped with sumac instead of paprika. It’s a more refined flavor, but without rejecting the dish’s picnic-food roots.

We got our first taste of Executive Chef Jasper Michael’s Texas background with the Fried Almonds. Hearty chunks of smoked, thick-cut bacon tossed in with spicy seasoned almonds that deliver a slow, creeping spiciness the more you eat.

Moving into the “Tide & Hide” section of the menu, the Crab Cakes are presented beautifully, topped with Kohlrabi slaw piled high and a delicious drizzle of Yuzu Ginger Aioli for each cake. The slaw is served cold and brings a sharp acidity that balances well with the warm rich crab cakes. There is a mild citrus tang to the aioli that not only accents, but serves to complete the flavors on the plate.

The Drunk Duck sits on a maple sweet potato puree, Chow Chow pickled relish, and bourbon BBQ sauce. More of Chef Michael’s southern cooking sensibilities bringing entrees to the next level. The vinegar bite of the slaw combines with the campfire call of the barbecue sauce, which perfectly accentuates the juiciness of the duck. It’s intensely flavorful without leaning on any of the duck’s possible gaminess.

The Shepherd’s Pie is made with lamb, because in the words of owner Greg Derman, “What kind of shepherd watches a flock of cows?” Again, the lamb is deliciously present without being overpowering and is expertly mixed with the zing of red peppers, the meatiness of Royal Trumpet mushrooms, the creaminess of whipped Yukon potatoes, and sealed with a delectable fried crust of Hook’s Maple Jack cheese.

The highlight of the dinner menu, however, was the Corvina Creole. The crispy pan-seared Corvina fish is delicate and buttery, topped with wilted frisee to add texture and a tart accent flavor and a dash of Cajun flare compliments of the Beurre Creole sauce. A dry sauvignon blanc plays very nicely opposite the richness of the fish.

As a side, found under the heading “Earth,” we sampled the Cauliflower. Sitting in a sherry vinegar reduction with herb oil and emboldened by Dunbarton bleu cheese, the cauliflower is darkly creamy, soothingly warm, and extremely satisfying. It’s smoky and sweet and has to be tried.

For dessert, we tried the Cheesecake, and it turns out that simple name is incredibly deceptive. What arrives is a happy union of crème brûlée and cheesecake in a ramekin. Underneath an exceptionally crisp caramelized sugar crust and a smear of homemade strawberry jam is a classic cheesecake flavor, rich and sweet. It’s wonderful for sharing and comes with two paper-thin slices of candied orange.

Though it’s a great place for dinner, Maevery is also making a play as the Lake Bluff weekend brunch destination with an extremely tempting menu of classic brunch options and savory faire from the south. With even the condiments made from scratch in-house, Chef Michael has crafted a fantastic spread of elevated American classics under the self-imposed guideline of keeping it simple.

Maevery Public House is located at 20 E. Scranton in Lake Bluff. For more information, or to make reservations, call 847-604-3952 or visit maevery.com.

With beer by the bottle and several wines on tap, there’s plenty to sample when you sidle up to Maevery’s bar. And as with the rest of the menu, Maevery’s drink offerings bring their own spin to some of the North Shore’s favorite classic cocktails.

Introduces itself with a lot of sweetness before resolving into a rusty, oak’ish palate. The glass is garnished with a shock of red thanks to a slice of blood orange.

With port substituted for vermouth, this isn’t your typical manhattan. It’s bolder and stronger, with a little sweetness, and an herbaceous kick thanks to a touch of rosemary in the glass.