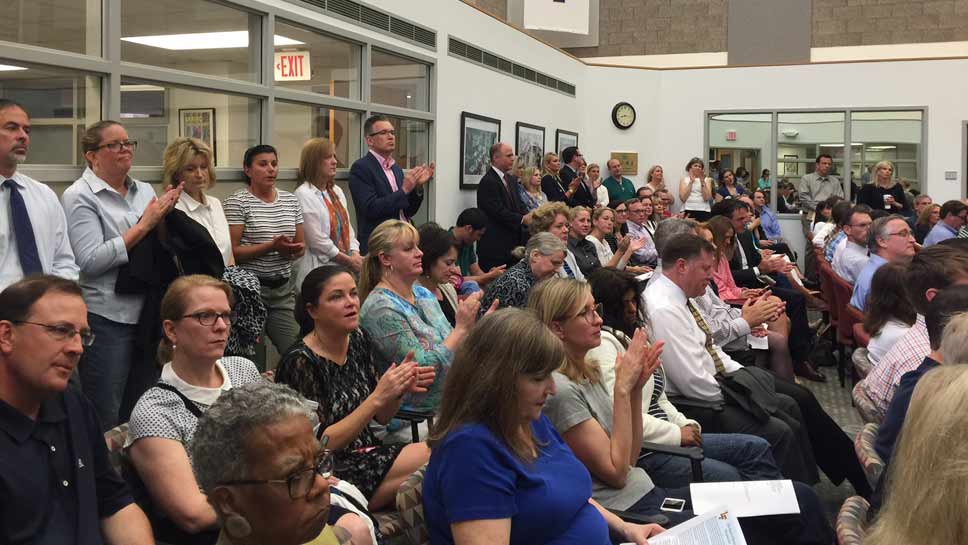 May 26 Special Meeting of LFHS District 115 Board of Education.

Updated Wednesday morning: A standing-room only crowd filled the District 115 Board of Education meeting room on Tuesday morning to voice opinions about a Lake Forest High School principal candidate whose website data was removed from the internet less than a day after her name was leaked to residents. The board did not come to a conclusion but instead decided to continue discussing the issue, and to that end it will schedule another Special Meeting between June 1 and June 9.

The board and superintendent Michael Simek listened to more than two dozen comments from residents of the community as well as colleagues and neighbors of the candidate, Dr. Chala (pronounced Shay-la) Holland, who is currently an assistant principal for instruction at Oak Park & River Forest High School. She was in the audience at the Tuesday morning meeting.

The controversy has been simmering since May 15 when word got out that Dr. Holland was the administration’s No. 1 candidate. Learning the candidate’s name prompted many people to do a Google search, which came up with links to a Facebook page and website for Dr. Holland’s consulting firm, Holland Educational Consulting Group (HECG), and to other social media accounts belonging to her or the consultancy – all of which were removed from the internet less than 24 hours later.

Many in the LFHS community found her writings to be controversial. For example, a post on the Facebook page for HECG, dated February 22, 2014, showed an image of Malcolm X with the quote “Only A Fool Would Let His Enemy Teach His Children” along with a comment from HECG stating “His words continue to resonate. His life will never be forgotten.” A post on the website for HECG, dated January 1, 2013, focused on academic “detracking,”  and how “tracking”  perpetuates racism in schools.

In an email to parents on May 22, Simek implied that people were taking information out of context.

Some people said they would like the board to tell the community why they think Dr. Holland is a good fit for LFHS. “We are listening,” said one resident, “but they are not saying anything.”

Board President Reese Marcusson said board members would not respond to questions at Tuesday’s Special Meeting, as it was their time to listen. He asked people to keep comments to three minutes and to not applaud.

At the beginning of the meeting, Superintendent Simek explained how the principal search is handled at LFHS:

The process took about a month, which Simek said seems too fast for some people and too long for others.

“One of the struggles you have is you are always balancing the interest of thoroughness and trying to get as large a group as you can for your talent pool, with the fact that the more desirable and talented the people are, the more likely they will be snapped up because you have a longer process,” said Simek. “How to manage those competing factors? … In most principal and other searches … time is rarely your friend, and as you move quickly you get to grab the best talent.”

When it came time for the public comment period, Lake Forest resident Thomas Matkov M.D said he was concerned about the philosophy of the current administration, and he cited the movement by Lake Forest’s elementary and middle school District 67 to abolish enrichment programs known as Explore and Quest at the Lake Forest elementary schools and Deer Path Middle School. (Daily North Shore has asked the administration for more information on this and is awaiting a reply.)

Another speaker, Steve Tozer, founding director of the Urban Education Leadership Program, told the board: “Chala Holland is one of the most outstanding educators we have ever produced. She has had ample opportunities to be principal at other schools and has turned them all down. She believes this is the right fit. …. What you have is a very, very strong candidate. It is difficult to find strong leadership for public schools; you have one in hand. I urge you to strongly think about her qualities, record and commitment in the most objective way possible. She has in fact supported differentiated instruction and tracking and has developed those programs even further than they were developed.”

LFHS freshman Michael Rourke stood up to speak about a petition he started on Change.org – he shared the text of his presentation with Daily North Shore to run as a Letter to the Editor; please click here to read it.

Jennifer Neubauer of Lake Forest said: “There really is one issue here: When did Ms. Holland scrub her internet presence and who told her to do it? Who told her to hide it from this board and hide her opinions from this community?“

Dan Cohen, a Deerfield native and colleague of Dr. Holland’s for four years at Oak Park & River Forest High School, said of her: “I’ve been teaching for 23 years and have not found a leader with as much courage, passion, love and heart for all students. … She has pushed me to be a better teacher, a better leader. She has courage, compassion. She has expanded the number of students in honors and AP classes so all students can achieve at their level. She adores students, and works with them on a daily basis. As a teacher and administrator, she takes time to be with young people and guarantees they are achieving at their highest levels.”

While Cohen was speaking to the board, several people in the audience exclaimed:

Marcusson pounded the gavel, Cohen finished and others stood up to speak.

After hearing from at least two dozen people, the board and administration went into executive session, after which they announced that they were extending the discussion for several more days and will have another pubilc meeting some time between the evening of June 1 and the board’s regularly scheduled meeting on June 9.

Some members of the audience pointed out that June 1 is graduation for Deer Path Middle School and questioned why the administration would plan a meeting for that night. Board member John Powers, who has not yet met the candidate, responded:

“In defense of the superintendent, we (the board) were very quickly trying to find the most expedited date. I personally did not know (June 1) was graduation, so you can hang me out to dry on that point. We are trying to make sure we are very diligent in listening to you as a community who have spoken very eloquently – most of you – and have spoken in a very timely manner in a very short period of time over a holiday weekend. “

Powers said board members “have all agreed with (Simek) that we should broaden this. We are doing everything we can to make sure you are heard … there are some things we certainly need to button up, my words no one else’s, to make sure this is done correctly.”

For another account of this meeting, read the Chicago Tribune article: “LFHS delays principal approval after parent backlash.”