Updated on Tuesday morning at 10:30 a.m.: The Lake Forest District 115 Board of Education announced on Tuesday morning that it will continue considering the candidacy of Dr. Chala Holland for the role of principal of Lake Forest High School and to that end it will schedule another Special Meeting between June 1 and its regular board meeting on June 9.

A standing-room only, vocal crowd filled the District 115 Board of Education meeting room on Tuesday, May 26, to voice opinions about the principal search at LFHS. Many parents expressed concern that website and Facebook posts for the candidate, Dr. Chala Holland, had been removed from the web after her name was leaked. Others said they took issue with written posts that remained in circulation. Others questioned the administration’s plans for tracking or detracking the LFHS curriculum. And some, –but not all — of those in attendance expressed dissatisfaction when colleagues Dr. Holland’s colleagues from Oak Park & River Forest High School took the podium to share their positive experiences and offer support for her candidacy.

The board and administration listened to public comments for about an hour and a half before moving into executive session, after which they returned to the public meeting. Please visit this link for a story about the May 26 meeting.

Lake Forest High School’s Board of Education is holding a Special Meeting at 7 a.m. on Tuesday, May 25, to discuss the hiring of a new principal. The candidate is said to be Dr. Chala Holland, Assistant Principal for Instruction at Oak Park and River Forest High School. Parent participation will be allowed at the beginning of the meeting, according to the agenda, after which the board will adjourn for executive session, and after that it will return to the public format to take action on “approval of principal multi-year contract.” The meeting will be at the LFHS West Campus.

Daily North Shore will report on the meeting — updating regularly on this website, so please return here for updates throughout the morning.

The administration has not confirmed the candidate’s name, stating in an email to parents on May 22 that “it remains by necessity and law a personnel matter required to be confidential.”

But names get leaked, and that is what happened on Friday, May 15, when word got out that Dr. Holland was the administration’s No. 1 candidate. Learning the candidate’s name prompted many people to do a Google search, which came up with links to a Facebook page and website for her consulting firm, Holland Educational Consulting Group (HECG), and to other social media accounts belonging to her or the consultancy – all of which were removed from the internet less than 24 hours later.

Many in the LFHS community found her writings to be controversial. For example, a post on the Facebook page for HECG, dated February 22, 2014, showed an image of Malcolm X with the quote “Only A Fool Would Let His Enemy Teach His Children” along with a comment from HECG stating “His words continue to resonate. His life will never be forgotten.” A post on the website for HECG, dated January 1, 2013, focused on academic tracking, and how it perpetuates racism in schools, and about white privilege and internalized racism. 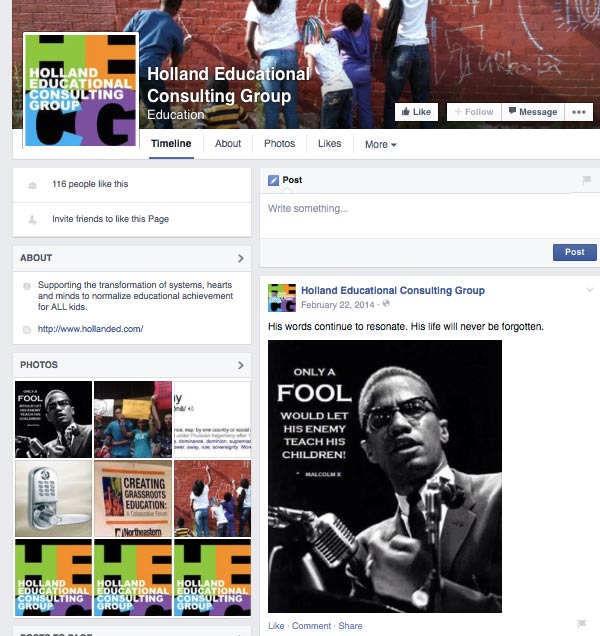 A post from the Facebook page of Holland Educational Consulting Group, which has been removed from the internet.

On May 21, Daily North Shore published a Letter to the Editor by Lake Forest resident Jennifer Neubauer questioning why LFHS was considering Chala Holland for the post of LFHS principal, and pretty soon the LFHS principal search was the main topic of conversations all over the community. (Click here to read Neubauer’s letter and all of the comments on it, and click here to access other letters about the issue both for and against Dr. Holland’s candidacy).

On May 22, Superintendent Michael Simek sent an email to parents implying that they were taking information out of context – which prompted many people to point out that context was taken away when Dr. Holland’s websites and social media accounts were removed from the internet. Many people said they wanted to know how her background, experience and views on education apply to the LFHS mission – which prompted some to wonder what is the mission? They expressed concerns about her writings on “detracking,” and they questioned whether her candidacy indicated LFHS would dismantle its honors and AP classes.

Superintendent Simek refuted that last point on May 25 in another email to parents:

“In the course of the principal search, a rumor has spread that we want to eliminate honors or AP courses. … Let me be very clear – we are not, and have no intention, of eliminating AP or honors at Lake Forest High School. … I would not recommend a principal candidate or any school leader interested in eliminating these courses. In fact, in our principal interview process, we were looking for someone with experience and ability to make additions and enhancements to these programs.”

Indeed, based on his email and at least one recent Board of Education meeting, it seems Simek’s focus is not on removing AP and honors classes but on making them accessible to more students. And a review of the 2015-16 course guide indicates significant changes to the curriculum, including the removal of the “College Prep” level (which was the term that LFHS until now used to describe the level just below honors and AP.)

What is not clear is how changes in the LFHS curriculum will impact the many students who already are enrolled in grade-appropriate or higher-level courses and what kinds of staffing changes will be required to accommodate what a board member on May 12 referred to as “a major culture shift at the school to remove prerequisites.”

In his May 25 email (click here to read it, Superintendent Simek stated that since he came to Lake Forest three years ago, LFHS has devoted significant time and effort to increasing the number of students in AP classes. For example, he said that in the 2014-15 school year, AP participation in science rose 32%. He also said that in the 2015-16 year the school has added AP courses that are new to LFHS. He also cited a 52% increase in the number of students enrolled in AP Calculus, and a 3% increase in participation in honors courses.

But like Superintendent Simek in his May 25 email to parents, Dr. Meagher did not address how changes in the LFHS structure are impacting students already taking grade-appropriate or higher-level classes.