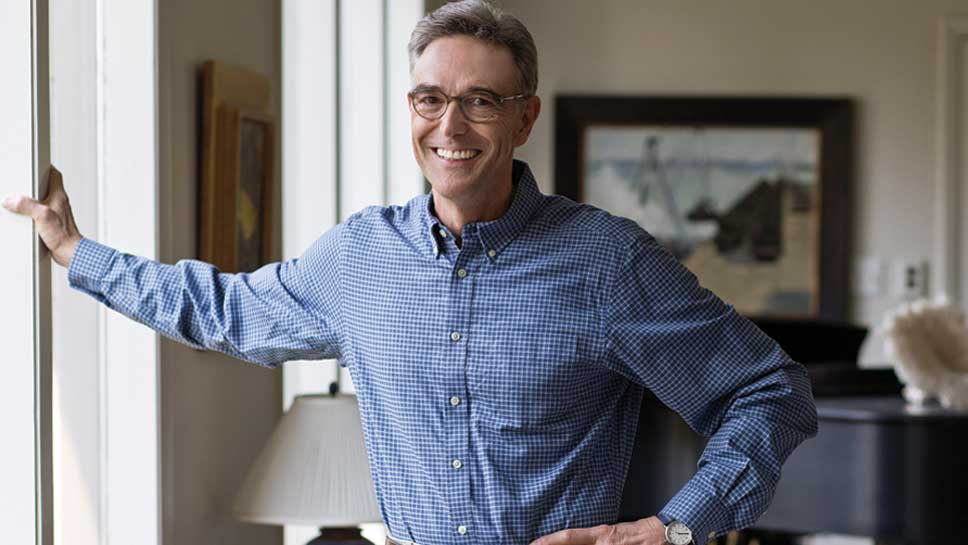 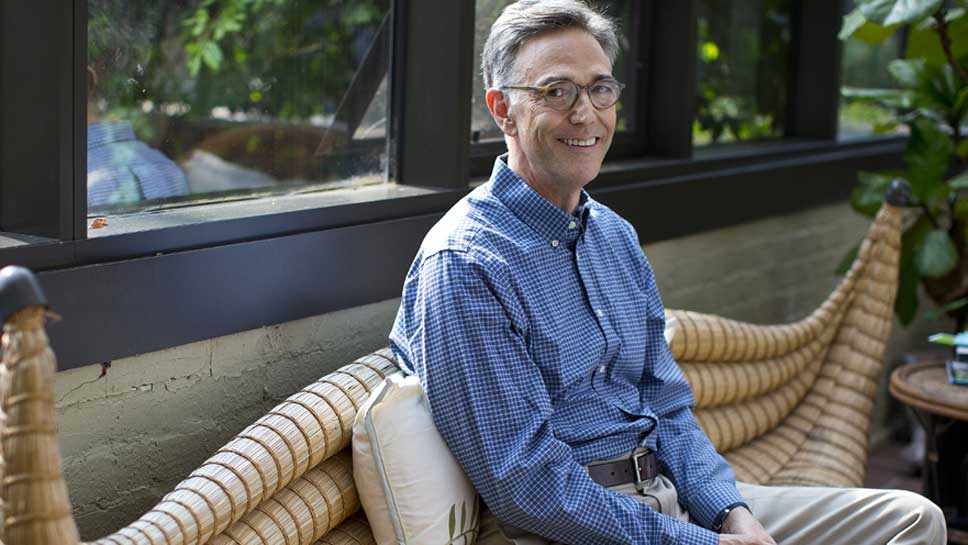 Ralph Hamilton lives and breathes poetry. As the editor of the Evanston-based poetry journal RHINO, Hamilton has put the publication in the same league as literary magazines such as Ploughshares and Gargoyle during his tenure. As a poet himself, his debut poetry collection Teaching A Man To Unstick His Tail (Sibling Rivalry Press, 2015), published this spring, has been praised by Crab Orchard Review editor Allison Joseph as “poetry of unflinching honesty, of pauses and silences and songs that will leave the reader barely breathing.” Hamilton will be participating in the next RHINO Reads! event on Friday, May 29 at Brothers K Coffeehouse in Evanston.

Gregg Shapiro: When did you first become interested in poetry?
Ralph Hamilton: I began writing poems as a kid and wrote well into college. When I was an editor of my college newspaper — back in the days when one actually cut and pasted a newspaper together [laughs] — if we discovered a blank space left over on a page, I’d run into the back room to compose a poem that could be used to plug the hole. Blessedly I used pseudonyms [laughs].

But then I stopped writing poetry for 30 years. Ten years ago that all changed when I rededicated myself to writing, and I haven’t looked back since. Between editing RHINO and writing Teaching a Man to Unstick His Tail, it’s been a very full decade.

GS: Several of the poems in Teaching A Man To Unstick His Tail are centos, defined as a poetic “work wholly composed of verses or passages taken from other authors, disposed in a new form or order.” John Ashberry, Robert Lowell, Ted Berrigan, Sylvia Plath and Ted Hughes, Robert Creeley, Sappho, and W.H. Auden are among the poets whose work you incorporate into the centos. Are there one or two poets among these whom you consider to be strong influences?

RH: Sappho continues to be a big influence. Although only a couple of complete poems and about 200 fragments remain of her nine books, the power and clarity of her images, her psychological insight, and the force, intimacy and candor of her voice continue to shape my writing. Although I did not make a cento of their work in this book, Frank Bidart and Anne Carson stand tall among other poets I look to.

GS: What do you enjoy most and what challenges you the most about writing in form, such as a cento?
RH: Since the book is a meditation on relationships, on love and loss, it was important that I speak to different kinds of loves and losses, but also that I do it in a variety ways so that the reader was continually surprised and engaged. Not only did centos and semi-centos provide alternative voicings and provoke varied modes of expression, but they also forced me to go deeper into the topic and to explore other aspects.
There is another aspect to the centos, though. The book can be read as a poet’s conversation with himself about navigating loss. But it is also a conversation with poetry itself, about what it can do for a writer and for a reader. In fact some readers have told me they’ve been surprised by Teaching a Man…, that “mere words can bring understanding, can bring solace,” or that “poems can help a person find her way through the morass of grief.”

GS: In poems such as “Making Sense” and “Mother’s Stroke” you write about your mother. She also makes appearances in other poems.
RH: On one level, writing about the illness and death of my mother was a way of coming to terms with the experience. With hospitals and nursing homes, one enters a strange and depersonalized world, and some of what one sees can be shocking even as one loses the person one loves. But writing about that was also a way of recovering my sense of who my mother was before she became ill, and that’s been a blessing.

GS: Animals and birds — including dogs, rabbits, chickens, wolves and caribou, rhinoceroses, bats, crows and cardinals — can also be found in your poems.
RH: I was a lonely kid, I suppose, who spent as much time talking with animals as I did engaging with adults. I felt deeply that the world was overflowing with sympathetic life of all kinds, that everywhere I turned there were birds and dogs and horses and chickens and all manner of critters (indeed even trees) that were available to encourage and console and advise me. And I used them that way.

Since I lived on a cattle ranch in Florida part of my childhood, I’d have an hour-long conversation with a favorite horse in the morning and then go walking (and talking) with one of my dogs all afternoon. I received some of the best advice I’ve ever gotten that way. I should say that not every creature in my habitat was benign. The place was thick with copperheads, rattlers, cottonmouths, moccasins and alligators, so the danger was real. I lost more than one pet that way.
Even as an adult I still find enormous consolation in being around animals, hiking and exploring in forests and wilderness, so they just naturally show up in the poems, sometimes as extras who stroll unbidden across the stage and sometimes as the lead character. There’s a delightful irony that I’d end up editing a journal named after an animal [laughs]!

GS: What role does humor play in your work?
RH: Joy and laughter are as much a part of life as grief and tears. In fact, I think some aspects of living can only be understood or expressed through a comic lens.   I love it when a poem takes me in just a few lines from a place of sorrow to one of goofy madcap farce.

I have a dark sense of humor, I’m told — I wrote my thesis on dark comedy in poetry — so I enjoy reading poems in which tragic and comic sensibilities all jumble together. Particularly in the navel-gazing hothouse of one’s own inner emotional life (not to mention in poetry), it’s useful to regularly puncture the balloons of self-importance.

GS: Have you started working on or thinking about your next book project?
RH: My next book is called The Barnyard of Boyage. It’s about growing up on the ranch, in the Bahamas, in the mountains of North Carolina, about wrestling with male identity as a son and as a father, and about coming to terms with what it means to be an adult man, though I still have a way to go on that [laughs]!

GS: How long have you been affiliated with RHINO?
RH: RHINO is now entering its 40th year as an independent poetry journal. I joined about eight years ago. I am so lucky: the poets who work on the journal are incredibly talented and dedicated; and we receive upwards of 15,000 poems a year from all over the world that we get to read and discuss. Each year is like another graduate education in poetry.

Not all the poems are of the same level of craft, of course, but each is a missive from a person’s heart, an essential record of that poet’s experience of what it means to be human, what it feels like to live and love in the world, to give birth, to witness suffering, to fight injustice. With 123 poets, our 2015 issue is our largest ever. The poets hail from more than 34 states in the U.S. and five other nations. Six poems are in translation, including work originally in Arabic, Croatian, Maori, Romanian, French and Thai.

GS: Where can people find out more about RHINO?
RH: Folks should go to our website at rhinopoetry.org to read poems from past issues, to listen to audio poems, or check out upcoming events. RHINO sponsors a monthly poetry reading and open microphone, RHINO Reads! at Brothers K Coffeehouse on Main Street in Evanston, and a monthly open poetry-writing critique session, The Poetry Forum, at the Evanston Public Library.

GS: In the interest of full disclosure, I want to say that I had a poem published in the 2012 issue of RHINO. For those who might be considering sending work for publication in RHINO, what kinds of poetry are you looking for?
RH: By choice we’re eclectic, encouraging both emerging and established poets from the U.S. and throughout the world. RHINO is devoted to printing creative work that tells stories, provokes thought, reflects passion, originality, artistic conviction, a love affair with language, and pushes the boundaries in form and feeling – while connecting with our readers and audience in the Chicago area and elsewhere.

GS: How long have you lived in Evanston?
RH: We moved to Evanston 15 years ago when my son was just seven. It’s been an extraordinary place to raise a child: diverse, culturally rich, accessible, safe, exciting, and filled with amazing people, particularly our neighbors. The day we moved in we found on our doorstep homemade cookies, a soccer ball, two cakes, champagne, a Cubs cap, flowers, more cookies, and a host of invitations to dinner. Everything a kid could want was within a couple of blocks.

There’s great classical music at Northwestern, fun community events like First Night, an ocean with no sharks just two blocks away, fabulous food, and the most interesting and erudite dinner companions you could ever want living next door. And Chicago is just minutes away!

GS: What inspires you about the North Shore?
RH: The North Shore, Evanston in particular, and Chicago have an incredibly strong poetry scene, with poets from Lisel Mueller to Li-Young Lee, David Trinidad, Quraysh Ali Lansana, Angela Narciso Torres, and Chris Green. I’m shaped by it and energized by it on a daily basis.