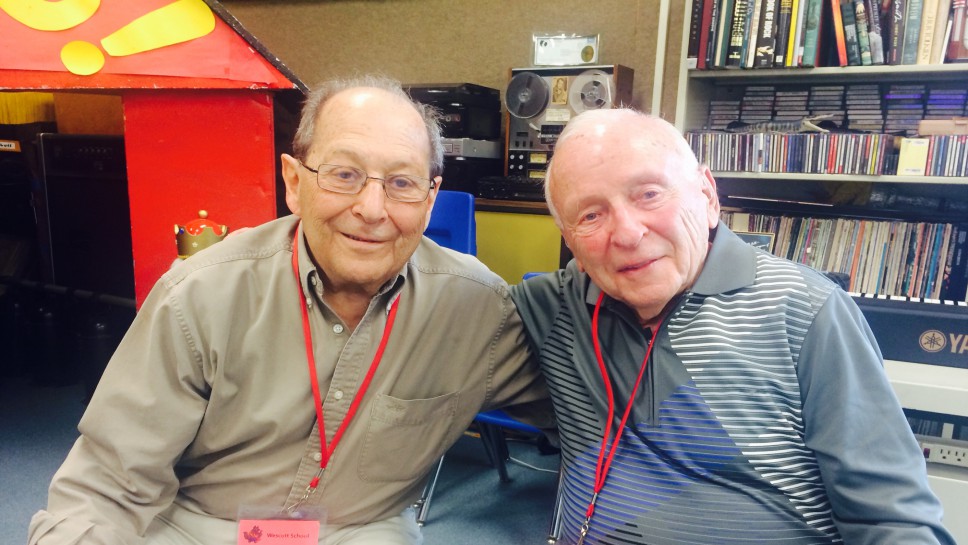 Marty Polin (left) and Seymour Weiner (right) have been friends for more than 70 years.

Marty Polin and Seymour Weiner are not only friends to the hundreds of elementary children they engage with every week as “grandpa volunteers” at Northbrook’s Wescott School—they have also been best friends to each other for more than 70 years.

“In all these years we’ve never had an argument or falling out. If you boil it down, it’s because we really love one another,” admitted “Grandpa Marty” Polin about “Grandpa See,” as they are known to the students in their respective first and third-grade classes. The school came together to celebrate the two in a patriotic assembly on March 27 that both honored their service during World War II and also celebrated their birthdays—which is where their story begins.

Polin and Weiner were born only four days apart in 1927 (they’re now 88). Both grew up on Chicago’s West Side but they would not meet until freshman year at Crane Tech High School in 1940.

“We both had a common interest in architecture and took drawing for three years, so we were together a lot in high school,” recalled Polin. The two went on to live together for one semester in college before being separated by World War II. While he was drafted into the Navy and lived at Naval Station Great Lakes, Weiner was sent to South Carolina to join the Marines. Neither one saw combat but the geographical distance caused their one and only drifting apart.

Neither can recall exactly how long it lasted or exactly how they reconnected (“You’re asking two 88-year-olds to remember details,” Weiner joked), but none of that really matters because they’ve always been connected regardless of time and space.

“We’re twins. They didn’t create us that way but we are twins,” said Weiner. As he starts talking about the “scary” telepathic bond they have, you get the sense that there really was some magic in the stars that brought these two together.

“I’ll wake up in morning and put on a blue sweater. I have not talked to Marty but when I see him he will have a blue sweater on. This happens two to three times a month,” he said. Polin gave another example, “In college, I went out and bought a car. It was a Chevrolet Club Coupe, an ugly two-tone green car and sure enough the exact same car pulls up along side me and there’s See driving the same damn car.”

Polin ended up at the University of Illinois for his post studies while Weiner headed to IIT, and soon enough they got their career starts—in the same field of course. Weiner worked for 20 years for Fidelity Builders, designing subdivisions and strip malls before opening his own firm that specialized in auto dealerships. Polin worked as an architectural engineer for three years and then also opened up his own company manufacturing furniture.

Throughout those years, the two would regularly put away the work to play rounds of golf and tennis and take vacations together with their wives and families, such as visiting Columbus, Indiana, to see the city’s architectural marvels and getting respite in Falling Water, Canada. “I just could not get rid of him,” joked Weiner about Polin.

Today their children and grandchildren are likewise spread out across the world, some as far as Israel and Sweden. So Polin and Weiner now fill their time with another “family” at Wescott where they are almost attacked with hugs by all the young children as they walk down the school halls.

“They always come to the classrooms with a cheery disposition and willingness to help out in any way they can. They both have such positive energy and they radiate love and warmth to everyone,” said first grade teacher Nicki Schafer.

The two first joined Wescott as part of the “Adopt A Grandparent” pilot program in 1995, started by retired Wescott teacher Sue Smilie and championed to today by current Principal Chris Brown who said that “seniors have great patience with the children and are generous in sharing their talents, life experiences, and their hearts.”

Volunteering is something both had always been interested in: Polin and his wife had been docents at Lincoln Park Zoo for 20 years. “Back then they had a traveling zoo program where we were able to take animals into inner city schools, children’s hospitals and senior centers and I fell in love with the classrooms,” he admitted. Once he retired and had more time on his hands he approached District 30 about continuing to volunteer in the schools.

At the time, Smilie was just starting the grandpa program. Weiner—who had been active with the Council for Jewish Elderly and raising college scholarship grants—was brought in by his friend four years later and ever since they have come together at the school every Wednesday. The program, they said, is quite different from when they started. Then, they used to read books to kids and work one-on-one with them.

“Our association is still with the kids, but in different way,” said Weiner. “Now it’s teaching them how to use a computer and not read or write. But that’s how our society is.”

Both men give one piece of advice about creating a long-lasting friendship in today’s age. “Put down the phones and talk to one another,” said Polin who along with Weiner is setting a fine example for all the students, though they are quick to admit they get all the reward for doing their weekly work.

“The kids always say ‘thank you for coming,’ and I say thank you to them because when I leave here they do more for me than I do for them,” said Weiner. “They make me feel alive.”

Polin agreed. “They make us feel we still have something to contribute. … As long as I can walk and breathe I’ll be here.”