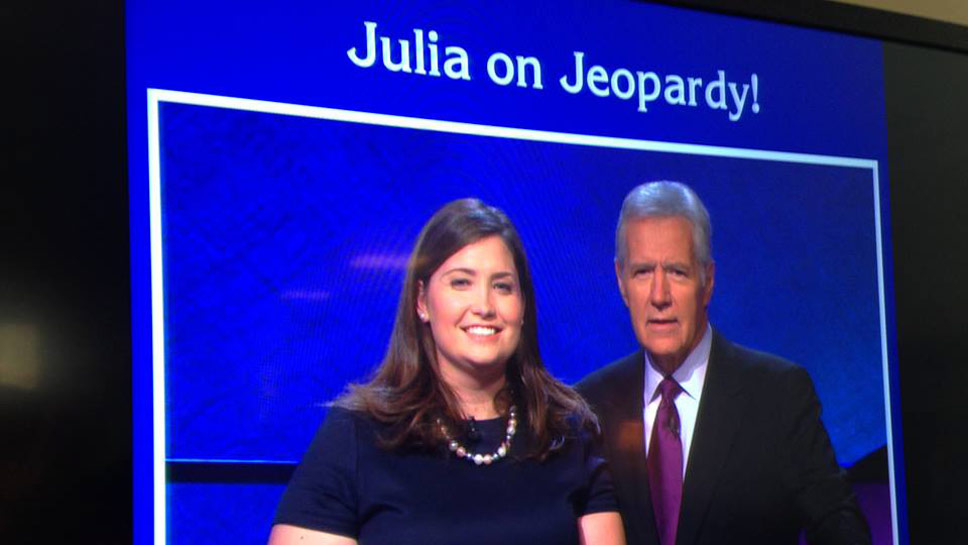 Julia Collins’ middle school dream was to become a ten-time Jeopardy champion. The Kenilworth native told an audience at the Women’s Exchange in Winnetka recently that she not only fulfilled her dream and then some by becoming the winningest woman ever on the game show ($430,000), but she also determined that she’d have a rip-roaring experience while competing. And again, she did. “I had such a fabulous time because I really wanted to,” Julia says.

“Jeopardy has been a part of my life for a long time,” the 32-year-old says. “I would come home from school at 3:30 p.m. and watch it. The older I got, the better I got in giving responses.” (Television after a day at her desk in Sears School did pay off.)

After taking an online test (as one of the million or so people who’ve done so since 2006), Julia answered the call to try out in person in July 2013. “You play a mock game during the try out,” Julia remembers. “You have to click the button like you have a nervous tick.”

Trying to be patient with the “Don’t Call Us, We’ll Call You” rule which stretches out over 18 months, Julia says her stomach flip-flopped when the game show representatives called her only six months later.

Her dream was now 20 years in the making, and she didn’t want anything to wreck it, including her attitude. “It was my lifelong dream so I didn’t want to come away from it disappointed,” Julia says. “I’ll be more disappointed if I don’t have fun, than if I lose,” she remembers thinking.

Walking into Sony Pictures Studios in early 2014 made Julia feel like a kid on the set of “Willy Wonka and the Chocolate Factory.” She quickly learned a couple of funny facts about the process: All contestants wear makeup. “I think the men felt very strange because most of them never wear makeup,” she laughs. And, contestants appear to be the same height because there are handy-dandy hydraulic lifts to stand on behind the game lecterns.

It sounds like a cliché, but it’s true: Alex Trebek is a nice guy. “Alex is really sharp and quick witted,” she says. “He had a good sense of humor. He takes questions during the commercial breaks from the audience.”

When the record-breaking show aired in June 2014, and Julia won her 20th game, making her the winningest woman ever on Jeopardy, the crew played “Girl on Fire” by Alicia Keys. “I had won more games than any female contestant who’d ever been on Jeopardy,” she says. “When you are on the show, your gender doesn’t matter. When you buzz in, the computer knows who is first.”

Helping girls get applauded for being smart is part of her Jeopardy legacy. “It’s really important that women are celebrated for being intelligent,” says the Wellesley and MIT graduate.

A whirlwind of interviews and events followed, including talking to Robin Roberts of “Good Morning America” and having her photo splashed across the cover of Wilmette Life with the headline, “The Quiz Show Queen.”

Remembering where it all started with her girlhood aspiration, Julia says, “Even if your dream is kind of ridiculous, it could end up being so much more than you ever thought. It was the best year of my life.” Enough said.