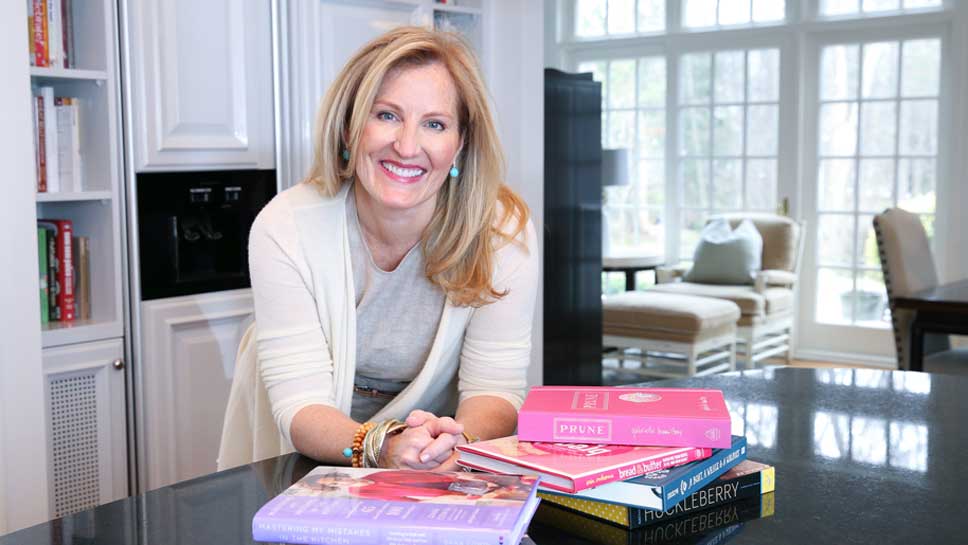 Kate Miller Spencer’s dad never took much of a liking to the family’s love for snow skiing. So as Spencer would join family and friends out on the slopes, partaking in brown paper bags full of lunchtime sandwiches and salty chips in Ziploc bags, Spencer’s dad would stay behind, working on creations of his own.

“I would walk in after a full day and there my dad would be with my mom, finishing off these amazing beef stews or chilis,” the Lake Bluff resident recalls. “It’s the dish I will never forget them making and probably the dish in which my love for food was built on.”

Granted, Spencer doesn’t consider herself an incredible cook by any stretch of the imagination and admits to still be “mastering her mistakes in the kitchen.” “Getting better at cooking is a bit like getting better at playing the piano—you have to practice to get better,” she says. Yet, her principles regarding food in general are strong.

And it is these ideals that has propelled this former Minnesota girl turned Northwestern University graduate turned food industry maven to create what some are saying is one of the most groundbreaking movements within the culinary industry in a long time.

“CookGirl is about showcasing the talents of female chefs and supporting the next wave of women in the culinary arts through the CookGirl Foundation,” exclaims CookGirl’s President and Founder of the CookGirl website, cookgirl.com.
The foundations of CookGirl were established just a couple of years ago, as Spencer attended a FOOD & WINE Magazine event in Beaver Creek, Colorado. Partaking in a lively conversation with two accomplished chefs—one male and one female—Spencer says she was quick to pick up on the fact that both of the chefs’ journeys within the culinary world differed greatly. And that while one’s gender could never go as far to determine the success of any chef, it did have a direct effect on just how much hard work it would take to get there. From a somewhat challenging barrier to entry to pure access to capital to start their own business ventures, the plight of the female chef was one that Spencer empathized with, and felt she could do something about.

“There are female chefs out there that don’t have enough capital to stock a wine cellar, whereas you have male chefs sitting there with 10-12 corporate sponsorships,” Spencer explains. “The fact is I wish that the disparity between female and male chefs wasn’t even a topic, but unfortunately it is. So instead of becoming discouraged, I felt there was a way to begin a female empowerment of sorts in this space through access to capital, and in turn, inspire the next generation of female chefs.”

This realization coupled with Spencer’s 50th birthday led the executive, who had spent over 20 years on the marketing/business side of some of the most illustrious culinary publications, to take the necessary steps to make CookGirl a realization.

“Sometimes those who shout the loudest get the most attention,” laughs the self- proclaimed trailblazer.

A living room search on Spencer’s laptop quickly helped discover that the brand CookGirl was available as a URL, and support and inspiration from her venture capitalist husband allowed for the dream to materialize quickly, launching officially in January 2015.

These days, CookGirl is becoming nationally known as a strong brand supporting all that makes up today’s female chef, supporting those women via culinary events to promotional opportunities to the CookGirl Foundation which will eventually go to support up-and-coming culinary professionals. Spencer even plans to find and purchase a studio kitchen in Chicago.

Yet, Spencer says she finds it incredibly important to keep her priorities in order. “I have always told the people who have worked with me that you will never remember the business reason you missed your child’s baseball game or your child’s choral concert,” emphatically says the mother of three and stepmother of two. “Sometimes, you have to stop, slow down and take a breath. There is always more work to do.”

So she turns off her phone and shuts her laptop and heads to the family’s home in Northern Michigan for some much deserved rest and relaxation. She also takes the time to talk to those special people in her life that have encouraged her from the very beginning.

“My parents have always pushed me to follow my bliss, from encouraging me to quit my job at Bon Appétit and start my rep firm 18 years ago to resigning my Time Inc contract last fall to launch CookGirl,” Spencer says. “Every time I talk to my Dad, it starts with ‘Hello Kate! How goes the CookGirl?’ He taught me to work hard, never run from a challenge and to take care of my family. And that’s exactly what I tend to do.”