The Parkinson’s Disease Foundation estimates that more than 60,000 people are diagnosed with the condition each year. That staggering statistic, coupled with new research showing that targeted exercises can actually slow the progression of the disease, have inspired two local fitness groups to offer new programs specifically designed for this population.

Eric Johnson started Movement Revolution in late 2014 as a personal training service for people with physical impairments from arthritis or strokes and chronic diseases like Parkinson’s. It was something Johnson was affected by first-hand as a physiologist at the Rehabilitation Institute of Chicago.

“I saw the need to offer that on a wider scale, not just in downtown Chicago,” he said. Today Movement Revolution is a home-based service that services residents (mostly age 65 and older) in and around the North Shore. As well Johnson rents studio space at the Trainers Club in Northbrook for those “that can benefit psychologically from going to a location,” he said. 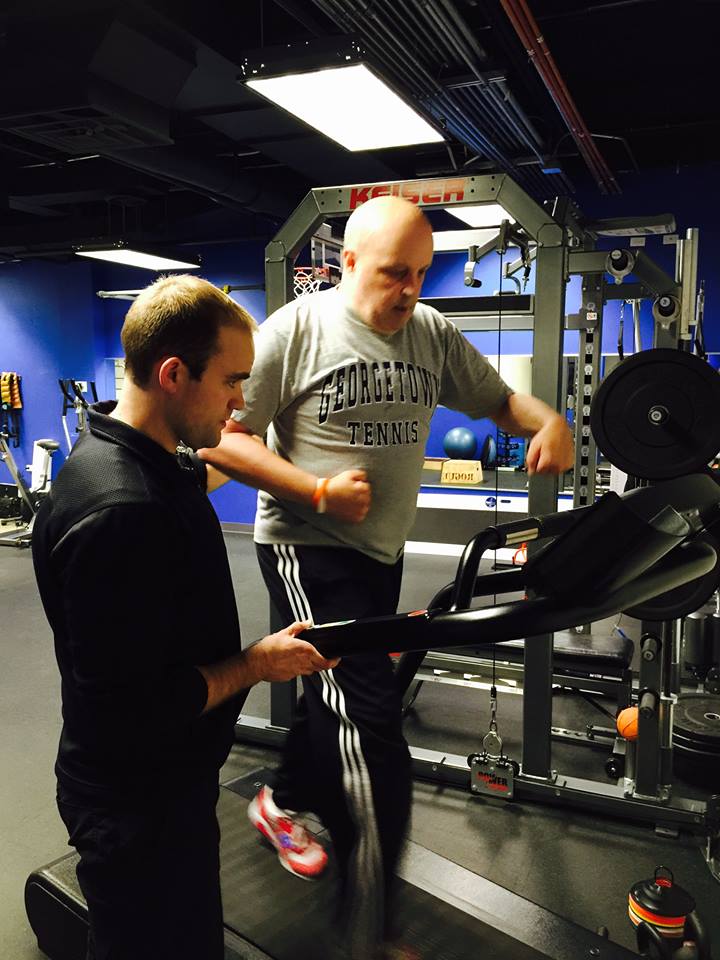 Eric Johnson works with one of his Movement Revolution clients.

“People with disabilities often don’t think they can exercise or think that this is the end of life as they know it whereas it’s really important to continue being active,” he noted. “There is research that the incidence of re-injury or progression of a disease is high if someone is not following a fitness program. My goal is to get the most effort physical out of clients in every session, improving the quality of life, making them stronger and keeping them as strong as I can as long as I can.”

Johnson targets the exercises to each individual client and said results depend on the stage or severity of the illness. “It could be six months or two years to see results, but I hope with each client to reach a level where they don’t need me anymore and can exercise on their own and live their lives.”

He points to one example of a client who had poor balance and was generally very weak; a goal of hers was to get back to her favorite hobby of golfing and be able to travel again on her own to visit her grandchildren in college. Together she and Johnson began working on core strength and intensive exercises pushing her heart rate to a safe level. “She didn’t like me a whole lot initially,” Johnson joked. Today, she has progressed to the point now that she uses no assisted devices and is almost fully independent and currently travels to visit Johnson in his offsite gym. “That’s why I love to do what I do, to get people back to living the life they had prior to their diagnosis.”

It’s a similar reaction that Samuel Rodriguez, Jr. finds with his clients at Falcon Boxing Gym. In December, the Glenview fitness center started offering a local chapter of Rock Steady Boxing, “the only boxing program of its kind that teaches the fundamentals of boxing while focusing on overall fitness and well-being for those living with Parkinson’s Disease.” The workouts are non-contact and offer training in optimal agility, speed, muscular endurance, accuracy, hand-eye coordination, footwork and overall strength. 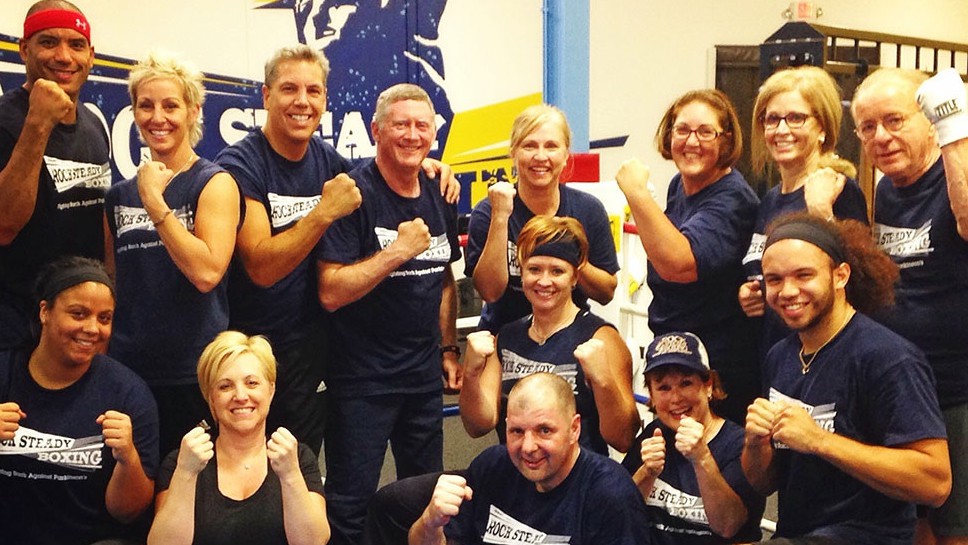 Some of the Rock Steady Boxing coaches and their clients.

“My favorite story is of one of our boxers that was initially dependent on his wheelchair. Now, the only time he uses his wheelchair is to rest in between activities,” said Rodriguez. The mission of Rock Steady Boxing he said is “to maximize the mental, emotional and physical potential of people with Parkinson’s Disease throughout their lives.” The program helps people to adapt, eliminating the commonly occurring negative self-talk of the incurable illness and instead emphasizing the enhancements possible to their quality of life. Rodriguez and his fellow coaches conduct an initial assessment and reassess the client every six months “to make sure we are making progress.”

The program currently has 10 participants who meet Tuesday and Thursday afternoons; the youngest is in their 30s while the oldest is in their 80s. There is also a similar boxing program offered called Jordan’s Corner that works with children and teenagers with special needs (they will host a fundraiser at Falcon Boxing Gym on May 9).

Rock Steady Boxing is growing through word-of-mouth and marketing efforts that include sending information to doctors. Even health insurance companies have started to accept the program, helping to offset the monthly $100 fee, said Rodriguez. “Some insurance does cover Rock Steady Boxing. I know that one of our boxers has the class partially covered.”

Johnson said for now his program is an out-of-pocket expense but hopes that insurance soon helps to pick up the tab for his clients, too. It’s one of the reasons he started Movement Revolution after seeing how limited the coverage range was for his physical therapy patients. “They were often only allotted eight weeks and that’s all the insurance would pay for or Medicare would cover, and they could get capped out.” He hopes until insurance catches up or until a cure is found that his service can be both economic and productive.

“The number of people diagnosed with Parkinson’s Disease is on rise every year,” he said.” We all need to grow awareness that exercise has an impact and is incredibly important for people to get the most out of their lives.”