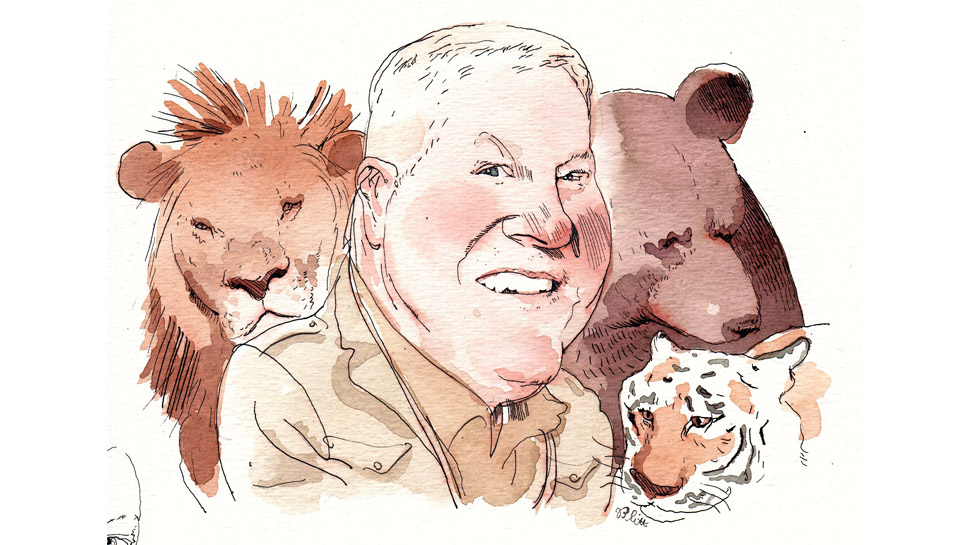 As a boy, Stuart Strahl visited the Bronx Zoo in New York with his neighbor, Dr. William Conway, who happened to be the institution’s director. In an aviary, Dr. Conway put peanuts in Strahl’s hands and, all of a sudden, Lady Ross’s Turacos flew over to eat them.

“It was the most startling, marvelous experience,” says Strahl. Inspired by the memory, he stands up to grab the hefty “Handbook of the Birds of the World” out of his office and flips to a picture of the two-pound iridescent blue bird with a red crest and yellow beak.

“Imagine that eating out of your hand and looking at you,” says the president and chief executive officer of the Chicago Zoological Society, which operates the Brookfield Zoo.

Back in his seat for lunch, the 59-year-old’s passion for wildlife and conversation becomes even more apparent.

“Building interest in wildlife and nature is there in our brainstems,” says Strahl. “People need to be connected to wildlife. Our mission is to inspire people and engage them in caring about wildlife.”

Though the Lincoln Park Zoo, The Art Institute and The Shedd Aquarium often receive more press, the Brookfield Zoo attracts more paying customers — about 2.3 million annually — than any other cultural institution in not only Chicago but the Midwest as well. More than 4,000 animals (including royal antelopes and two-toed sloths) can be seen across the nonprofit’s 216 acres. Its history boasts many innovations, from the inaugural animal hospital at a zoo to the first genetics laboratory. Original governing members of the Chicago Zoological Society include some of the city’s most prominent names, from William Wrigley Jr. to A.B. Dick to Solomon A. Smith.

Thanks to 83 acres of land donated to the Forest Preserves of Cook County by Edith Rockefeller McCormick of Lake Forest, who dreamed of having a barless zoo so animals and people could connect, Brookfield opened in 1934. That connection she desired exists today and will be strengthened this summer with the opening of Hamill Family Wild Encounters, where visitors will be able to touch and feed parakeets and goats while also enjoying close encounters with red pandas and llamas.

Though a number of new exhibits have opened under his watch (including the Great Bear Wilderness) since he was hired in 2003, Strahl has also faced the challenge of reinvigorating the 81-year-old facility’s aging infrastructure. In the past decade, every boiler and many roofs have been replaced.

“Imagine running a small village,” says Strahl, who oversees a $60 million operating budget. “In addition to animal staff and exhibits, we have our own emergency-medical-technician-trained police force, our own food people, maintenance and design shops, and three or four weddings each weekend. It’s a pretty complex organization.”

Strahl and his management team have boosted attendance at the zoo by more than 15 percent and expanded membership to 110,000 families. He has hired a staff to develop outreach programs on Chicago’s West Side and South Side to persuade more inner-city residents to visit. He worked with the Forest Preserves to notch an agreement with the Pace bus service to drop people right at the doors of the zoo from places as far way as 95th Street. He hopes new offerings (in 2014, Brookfield launched extended hours on summer nights with music and light shows) will bring even more people in.

His enthusiasm for nature (he worked as a field biologist in the South American jungles for 10 years after earning a bachelor of arts in biology at Bates College and a Ph.D. at SUNY Albany) was stimulated during childhood. Strahl grew up in Pelham Manor, N.Y., a few blocks from Long Island Sound and from the forests of Pelham Bay Park.

“I’d go exploring with my brother. We’d have canteens and go bird-watching,” he recalls. “We’d go down to the rocks and get mussels and flounder and make a campfire. It was like going on safari.”

His grandfather owned a 410-acre farm on a deep-water creek on Maryland’s eastern shore, a picture of which hangs on the wall above him. Strahl visited often and would explore surrounding forests, wetlands and the Chesapeake Bay. When his grandfather passed away, the family donated the farm to the Chesapeake Audubon Society. Strahl created a performance-based science curriculum there for neighboring schoolchildren to take advantage of.

“My grandfather, who was a businessman, probably would have said, ‘Oh my God, you gave it away?’ “ Strahl says. “But our family felt other people should have the same experience we did.”

Before coming to the zoo, Strahl worked as vice president of the National Audubon Society (he first donated to the organization as a teenager, using money earned from mowing lawns). Moving to Miami in 1996, he helped the society restore the Everglades, a massive area of tropical wetlands in Florida. Though the space generated $20 billion in tourism from sportsmen and others at the time, that number was dwindling because of dirty water and other ills. Recruiting supporters from the chambers of commerce, engaging with the agricultural community and more, Strahl helped Audubon create a broad-based movement that culminated in the largest ecological restoration initiative in history, the Comprehensive Everglades Restoration Plan.

As lunch finishes, it’s time for Strahl to return to his adjoining office, whose door is emblazoned with a bison, the Chicago Zoological Society’s logo. No doubt he’d prefer to be roaming the grounds with the speed of that hoofed animal to connect many visitors with Brookfield’s variety of creatures. Says Strahl, “When I give people an experience with an animal they’ve never had before and to have their face light up — I see that spark that ignited my own passion for wildlife and conservation. All of us can make a difference, and that is what Brookfield Zoo is all about.”