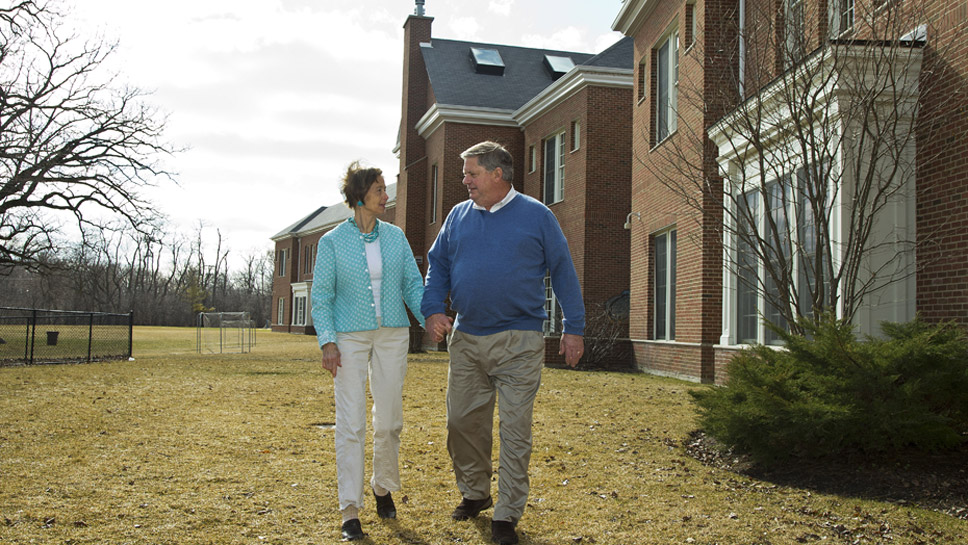 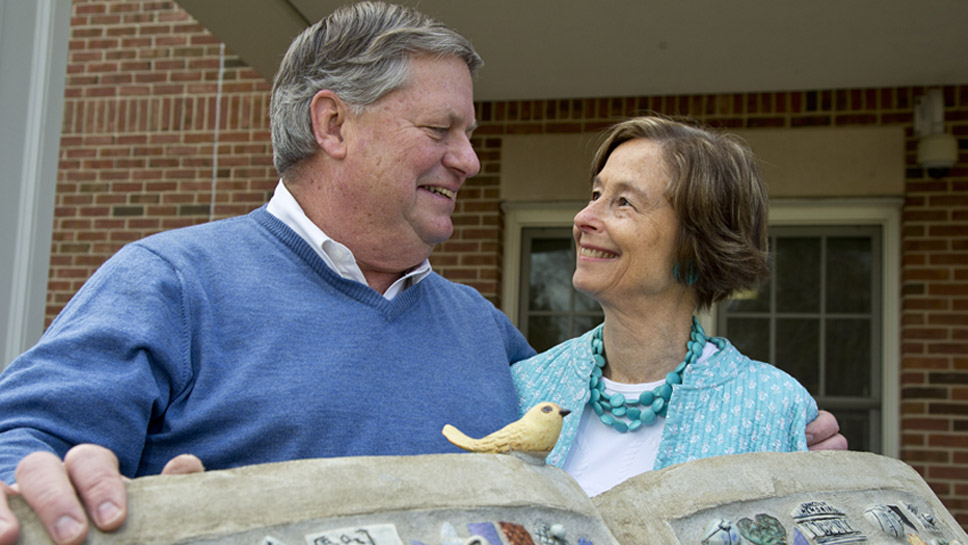 Many years ago in a land far from Lake Forest, Bob Bullard and Sally Weissent attended grade school together. They also gathered at the same church, the Union Congregational Church in East Walpole, Mass.

As time went by, Sally watched Bob — a strong-armed right-hander — pitch baseball games on the same Little League and high school teams as her brother, Sandy, who would become a star pitcher at Harvard University. And back at church, they connected through their senior high fellowship group.

Bob moved on to Lake Forest College and Sally (two years his junior) attended Lake Erie College in Gainesville, Ohio. During college, they started dating. After graduation, Sally conducted graduate work at National Louis University. In 1970, they were married.

The next year, armed with a bachelor of arts degree in political science, Bob was hired as chair of the history department and taught courses in American history and Western Civilization at Lake Forest Country Day School, a not-so-long walk from his college dormitories. After five years at a public school, Sally — whose dream since childhood had been to be a teacher — joined him at LFCDS during the nation’s bicentennial.

Fast forward almost 40 years. Sally and Bob are winding up an unparalleled career as teachers and administrators at the independent school. No couple has enjoyed a longer tenure at the brick institution between Western Avenue and Green Bay Road. No teacher has served longer than Bob.

“The daily interaction with kids and colleagues – no question,” begins Bob, sitting next to Sally during lunch at Miramar in Highwood. “It’s our second family.”

“The people and the intellectual stimulation,” notes Sally. “Those ‘aha’ moments when a child gets it. Those moments lend great inspiration to one’s life.”

To get a sense of the last time a Bullard did not teach at LFCDS, the west campus of Lake Forest High School was but a dream. The movie “Ordinary People” (in which Bob and Sally’s daughter Katie played a role as a trick-or-treater in the Halloween scene) was a decade away. The tools of the modern student — such as laptops — had not been invented.

They’ve seen a few changes since they first lived in faculty housing on the south end of the school’s property. Not only have the woods by that house been cleared to create a baseball field and an outdoor laboratory, but a glance north reveals a structure twice as big as the school Bob walked into during the Nixon Administration.

But the biggest change, both agree, is the diversity of the school community today.

“I feel that more people today come not necessarily because of the traditions and the overall excellence of the curriculum but because of the sound mission of the school,” says Sally, who notes that all programs — especially the fine arts, instrumental and choral ones — have improved immensely during her tenure.

Adds Bob, who founded the admissions office in 1975, “I always worried how comfortable it was going to be for new students, particularly in the middle grades, as they came into the school. We don’t even think about it now.”

Bob points to one of the school’s signature events, the Veterans Day assembly, along with the Washington, D.C. trip (which he started and ran for 27 years) as particular highlights during his decades. Sally mentions Pioneer Days, which she launched with her fellow third-grade teacher, Lynn Beuttell. Students would live in a historical time (such as 1856) and learn how to stitch, make jams and more over three days.

“I did it for 17 years,” she says, “and it never got old. Parents and fellow colleagues would get involved as well.”

When asked about the influence of mentors, one name passes both of their lips.

“His sense of humor and his warmth. His level-headed perspective. His support of faculty. His unmatched ability to teach and to help kids understand math,” begins Bob about the longtime LFCDS teacher and administrator, who passed away a few years ago. “His impact on me was profound, and I think his students said it best when they noted in their yearbook dedication, ‘Mr. Leake, you are Socrates, Zeus, Abraham Lincoln, General Patton and Captain Kangaroo all rolled into one. ‘ ”

Both are fans of former headmaster Jim Marks, who they agree left an indelible mark on the school, and former headmaster Malcolm Coates, who helped Bob cut his teeth in administration and who was especially helpful to Sally when she started teaching. And they both share great excitement for the future of the school under the leadership of current Head of School Bob Whelan.

When Whelan joined LFCDS two years ago, he felt fortunate to have the Bullards as guides.

“It was an extraordinary gift to learn about Lake Forest Country Day School history, culture, and the importance of the surrounding community from these two remarkable people,” he says. “Bob and Sally’s devotion to the school manifested itself in an encyclopedic knowledge of people, places, and events.”

Back when they were newcomers in Lake Forest, Sally and Bob were quickly championed by school parents. One of their favorite memories occurred upon the birth of their first child in 1975. Frank and Jean Farwell, along with George and Hat Berminghams (all former LFCDS parents), threw a baby shower for them.

“Talk about being embraced by the community,” say the Bullards, whose three children, Katie, Scott and Lisa, attended LFCDS.

This summer they’ll move to Brewster, Mass. on Cape Cod. Sally plans to spend time with her 93-year-old mother who, on several occasions, came out to help during Pioneer Days, bringing back memories of her own one-room school house experience growing up on a farm in northern Vermont. Sally also would like to spend time volunteering at two charter schools in Boston started by LFCDS graduate Jennifer Grumhaus Daley. Bob plans to stay connected with LFCDS on a consulting basis for boarding schools and for connecting with alumni. Both expect to volunteer at the Cape Cod Museum of Natural History, a mile and a half walk from their house, and catch a few games of the Brewster White Caps of the Cape Cod Baseball League. They are thrilled with the thought of visits from their six grandchildren as well.

Before they depart, LFCDS will hold an event in their honor at the school on Saturday, May 2. Ice cream will be served as children run around the fields; old friends will offer toasts. In addition, the Bullard Fund for professional development for faculty and scholarships for students is being created to honor their legacy.

The couple will officially depart sometime in June and don’t even want to talk about the thought of their last time walking out the doors. When it’s time for school again, they understand the transition will be hard.

“I haven’t known any teacher who retired who didn’t feel a sense of loss when September rolled around,” Sally says.

But they’ll adapt. And they can’t imagine their lives having turned out any other way than working at Country Day. Say Sally and Bob, “We have been blessed.”