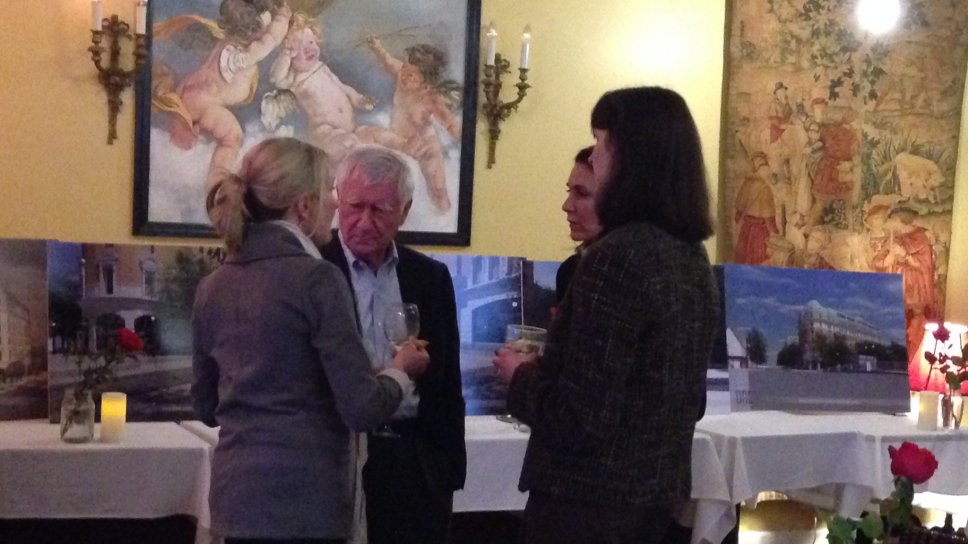 Winnetka residents and business owners mingled with Stonestreet Partners LLC’s development team at Mirani’s restaurant on April 16 to learn more about “One Winnetka,” a seven-story building being proposed for the East Elm Street business district.

At roughly 45,000 square feet, the Beaux Arts building was designed by architect Lucien Lagrange, and would be located at the corner of Lincoln and Elm Streets, at what is also known as the “Fell Property.” The controversial proposal is a seven-story, mixed-use building featuring 120 rental apartments on the upper floors, underground parking, and retail space on the first and second floors.

The event at Mirani’s was somewhat sparsely attended in comparison to the Plan Commission’s March 25 and April 8 meetings, which were crowded with residents protesting the development.

The developer planned the event in effort to exchange information with the community. “It’s to hear feedback from the residents,” said Jeff Funke, an architect working with Lucien Lagrange. “Our goal is to listen to the residents and people of Winnetka and then as a team go back and re-evaluate.”

Jody Lapp lives near the library and decided to attend the event with a friend, since she had missed the public meetings. “We came to find out more. I really don’t know anything about this,” she said. She had heard from other residents concerns about the height, the French style of the building and the size. “It’s an awful lot of [rental] units,” she observed.

But members of the business community in attendance seemed excited about the new development. “I think it is great. Winnetka needs development,” said Deb McMahon, Manager of J. McLaughlin, a clothing store located in the East Elm business district. McMahon had reservations about the height, but was otherwise enthusiastic about the prospect of more foot traffic in the area.

Mitra Ryndak is owner of Cafe Aroma, which sits directly across the street from the development site. “I think it is beautiful. To me it is breathtaking. I would love to see something new on this street,” she said. Ryndak also expressed concern about the building’s height, noting that the developers should build something lower in response to the community.

When Daily North Shore asked architect Lucian Lagrange his view on residents concerns about the size and scale, he said: “It is not an issue of scale, it is about architectural style. It will attract people. The key is that people will want to live here.”

Lagrange also noted that the Beaux Arts style of the building fits in with the community. “It is traditional and it is conservative. Winnetka is a conservative community. The architecture here is classical,” he said.