Glenview is about to get its very own Rock House, with a grand opening scheduled for this Saturday, April 18. The coffeeshop and music school combo that originated in Wilmette finds its encore at the space formerly occupied by Georgia Nut Company on Glenview Road. It will be Rock House’s second full location (a third kiosk is located in the Wilmette train station).

“We didn’t look at many other suburbs. Glenview felt like a natural fit and the people in town felt like those that would dig what we are doing,” said co-owner Chris Karabas about the expansion that has been in the works for about a year. The close proximity to Wilmette is one of the reasons for choosing the spot since it allows current baristas and music teachers to work at both locations. “We want the Glenview shop to have the same soul as Wilmette and a lot of that comes from the people who work here,” Karabas said. 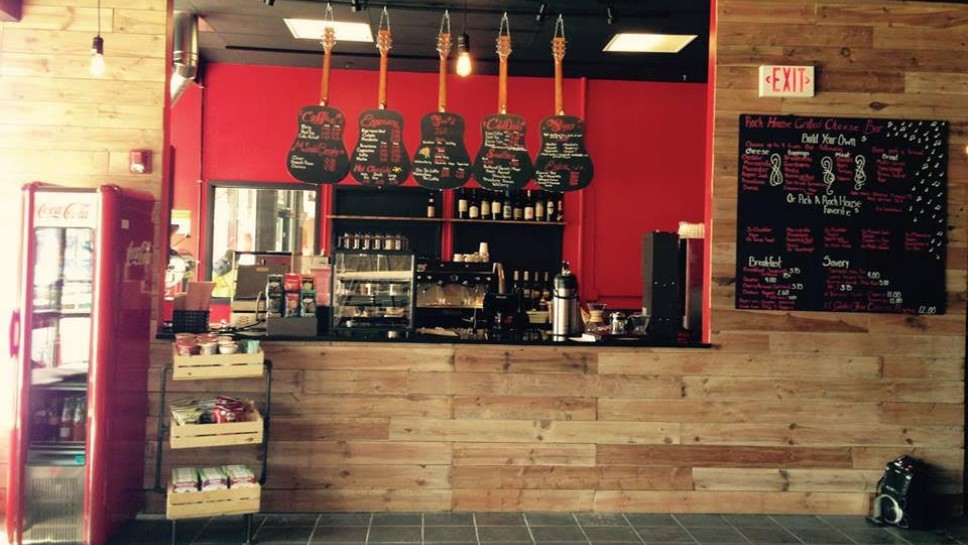 Rock House has been around for five years and originally set up shop in a one-room storefront on Green Bay Road before moving to its current space at 1150 Central Avenue. “It was tiny, we naturally grew into the apartment upstairs and then we grew out of the building altogether,” said Karabas. Part of that is because the shop has grown in popularity over the years as something unique to the area.

“Our intention was to have a place that parents can slow down and enjoy a cup of coffee or wine or beer while their kids are having music lessons,” said Karabas, aware of his own experience as a busy dad.

Lessons are available for guitar, keyboards, bass, drums, voice, fiddle, mandolin and banjo for children starting at age 5 through high school. The younger kids take general introduction to music classes while more advanced students get placed in bands and get to write and record. All are taught by working musicians with degrees in music.

“We have a strict policy on that,” Karabas said.

Though the Rock House music school is 90% kids, new programs like “Soccer Moms Are Rocker Moms” are taking off with adults.

The combination of music and coffee are “the symbols of the best part of everyone’s day,” said Karabas, who distinctly recalls the intersection of the two when he was living in Nashville trying to make a living as an up-and-coming country musician. He had recording and publishing deals and was consistently writing material to debut in places like the city’s coffeeshops.

“Songwriting was always done with other writers and we’d be sitting in chairs with pot of a coffee between us, so the connection was very real and important to me,” he said. “It was ritual.”

When his record deal fell through, the Des Plaines native moved back home to start his next phase. He formed his band, Chris Karabas and The Lonesome Rodeo that today headlines Bub City and Joe’s on Weed Street in Chicago and even the Rock House stage. His drummer, Rob Mueller, is his business partner (the two also have another company where they represent film directors).

Karabas still gets down to Nashville several times a year. He recently bought posters in the city that will be on display in the Glenview shop. Though the interior will have some similarities to the Wilmette location—the “crazy wallpaper,” guitar menus, Edison bulbs and chandelier will be hallmarks—“the rest will make it its own thing.”

Helping that is the fact that the Glenview locale is triple the size of the first location, allowing the Rock House team to expand, possibly bringing back the vinyl shop they had in the early days and also offering bigger rehearsal spaces, a recording studio and a bigger stage for the monthly showcases the school presents and the family karaoke on the weekends. “If we go beyond two Rock Houses they will never all look the same,” said Karabas.

But they will all roast their own coffee, something Rock House prides itself on. “Our beans come green from a broker that gets them from Nicaragua and Colombia, all over the coffee belt, and we have our own roaster in the window so we serve it fresh. It’s unique and the taste is unparalleled,” said Karabas. “I was never a coffee snob ‘til we opened this place.”

Food options are more local, with pastries delivered from Tag’s Bakery in Evanston and pizza from Northbrook’s Barnaby’s, all encouraging customers to frequent the shop all day long, which they have done. In the mornings Rock House has now become a utility business center where meetings take place thanks to the free Wi-Fi; by afternoon it becomes a music school, and at night it caters to adults with live music.

“We want to make sure that everyone gets to start their day with coffee and end it with music,” said Karabas. “It’s how I live at home and I can’t imagine it any other way.”