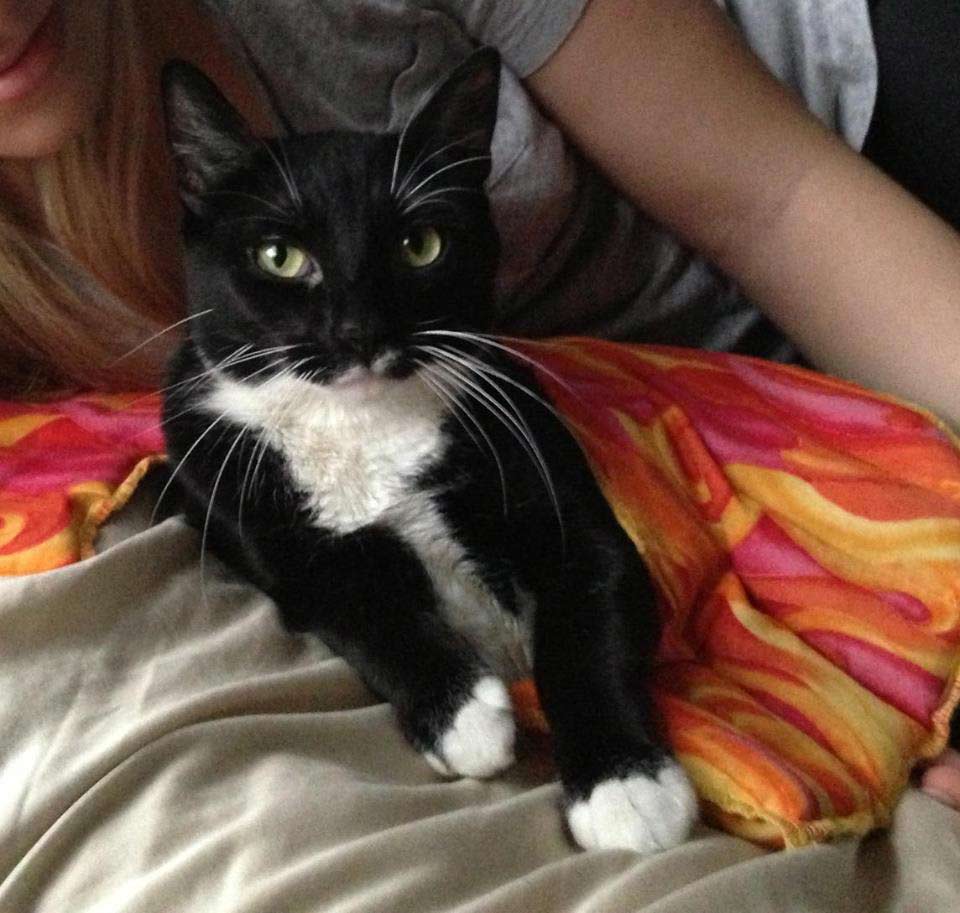 Remie when she was staying with Susan Nommensen

Remember the black cat with white paws that we wrote about last week? The plot is getting thicker …

Recap: Debbie Dent of Lake Forest has seen a black cat with white paws hanging around her back yard in west Lake Forest recently — pictured in the photo directly above. It turns out she’s not the only one who has seen the cat, and it also turns out that another local family is missing a cat that looks very much like the one in the photo. That cat, Remie, pictured at the top of this story, went missing nearly two years ago from Susan Nommensen’s house in the Lake Forest Heights neigbborhood.

Susan explained that she was cat-sitting Remie for her daughter, Sara, who was in France at the time.

“Remie went missing after we moved into a temporary house across from the house we had just sold,” she said. They stayed at that house until the house they were building was complete – which means that at the time Remie disappeared, there was a lot of moving around. Since then, they have heard that Remie (or a cat resembling Remie) has been seen blocks from that original place.

“Remie might be trying to get back to where she was last with us,” Susan said. “She is a very smart, but elusive cat. Prior to her outdoor ed experience, she was a city dweller in Manhattan – and she used the bathroom toilet – no litter box.”

Susan and her family adored Remie and looked and looked for her for half a year, then figured she was gone for good.

But maybe it’s true that cats have nine lives. Maybe the cat in the Dent’s neighborhood is the prodigal Remie, looking to make a dramatic re-entry into her family. Maybe someone reading this story can help catch Remie?

Susan showed the recent photos to her daughter and she firmly believes the cat seen in the Dent’s yard is Remie the missing feline. Susan asked an animal warden about the possibility of finding a cat two years after it disappeared, and she learned this is not uncommon and that two years isn’t extreme.

In recent days, the black cat with white paws has been seen in the Old Elm area and Evergreen neighborhoods of Lake Forest and has become very brave about hanging out on people’s patios. She was last seen off Old Elm between Routes 41 and 43. Please contact Susan at [email protected] with any information.

And worth noting is this: Last week a Lake Bluff family helped their wayward cat find its way home by following instructions for how to find a lost house cat, which they found on the American Humane Society’s website — click here to read them. Basically, they left the garage door open, and placed in it a bowl of cat food and a scarf with the owner’s scent, and they checked the garage regularly throughout the night, which they learned is when a frightened or lost pet tends to move around most.