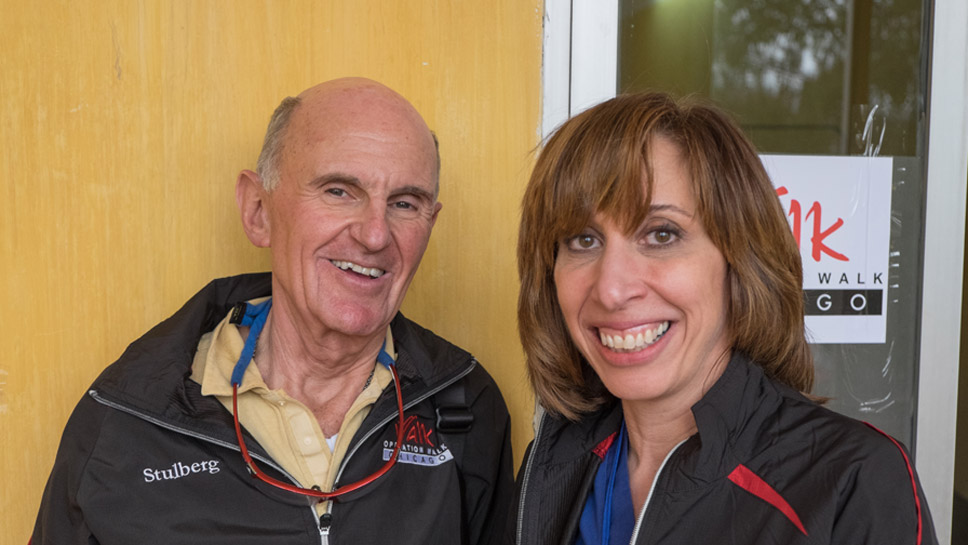 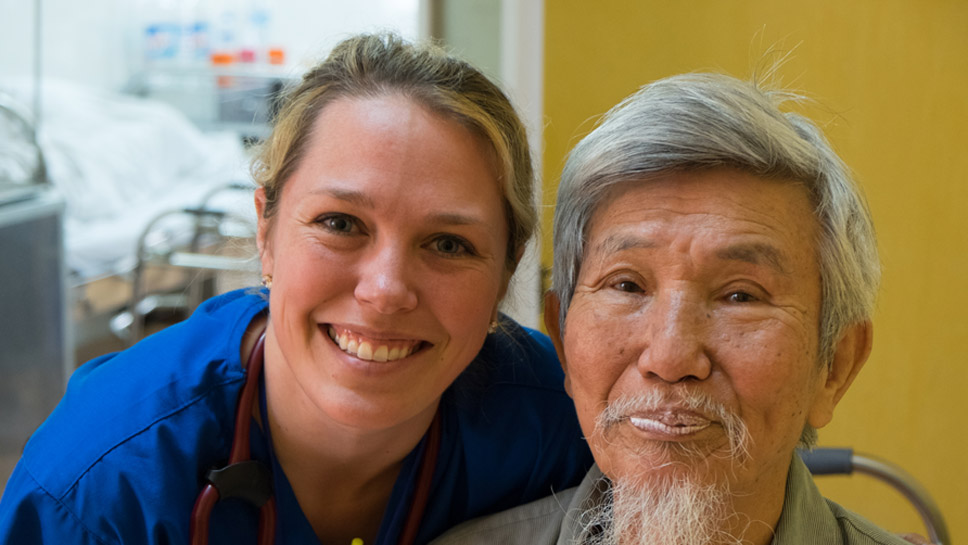 Heather McKinley, a NorthShore University Health System orthopaedic physician assistant, spends time with a grateful patient in Vietnam who was once suspicious of Americans. 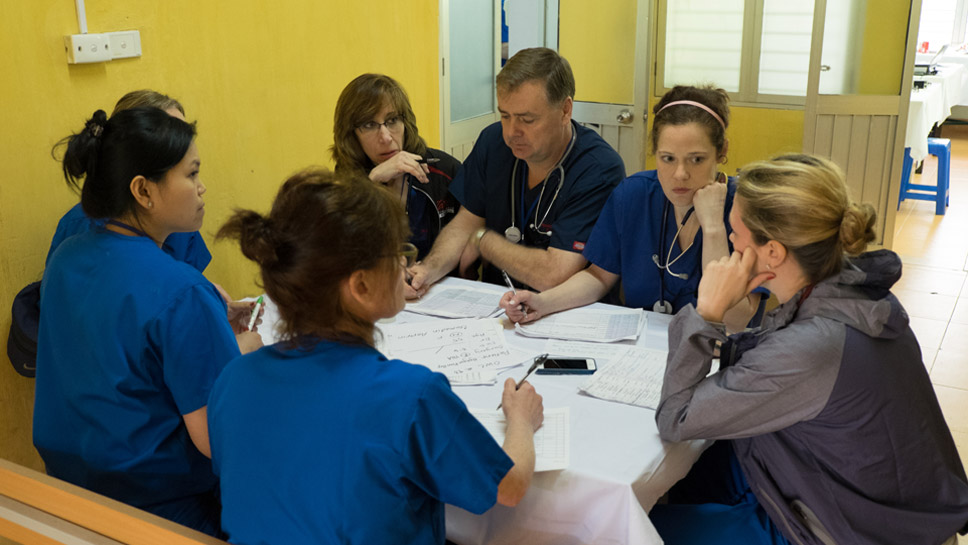 It withered his hips. It immobilized his knees. He lived on the third floor of an apartment building in Hanoi during those 84 months.

“He couldn’t stand. He couldn’t walk,” says Dr. Victoria Brander, physical and rehabilitation physician at NorthShore Orthopaedic Institute. “He was trapped up there.”

A local priest donated a computer to the man, who taught himself how to use it. He met a woman via a Christian dating site. They fell in love. She inspired him to do something, anything, to escape his pillow-and-linen prison. He designed custom crutches. He got out of his bed, used his crutches, descended stairs and reacquainted himself with civilization and fresh air.

A team of Operation Walk Chicago volunteers arrived in Hanoi in late February. Brander and Dr. David Stulberg cofounded the private, nonprofit medical organization 11 years ago. In a 10-day stretch in the capital of Vietnam — beginning at 6:30 a.m. on most days and ending at 10:30 p.m. — Operation Walk Chicago surgeons and support staff performed 70 state-of-the-art hip and knee replacement surgeries on 56 patients. Many of them used their vacation time to alleviate others’ pain. Fourteen of the 55 volunteers are affiliated with NorthShore University HealthSystem (NorthShore Evanston, Glenbrook, Highland Park and Skokie hospitals).

Some patients underwent two procedures at once.

The 28-year-old Vietnamese was one of them. He had both of his hips replaced.

“His story … it’s an amazing one, one of my favorite stories to tell,” Dr. Brander says. “Our missions overseas have opened our eyes to the needs of many, many people … poor people, catastrophically disabled people. Our skills and technology are needed in other countries; we started this to serve underserved populations. We screen hundreds and hundreds of people before picking those who need the surgeries in a host country. We make sure the candidates are unable to pay for the surgery, and we make sure they are healthy enough to undergo the surgery.

“When they find out they had been chosen,” she adds, “they feel like they had just won a lottery. These surgeries are life-changers.”

Another moving story at Hanoi Military Hospital 108 last month centered around a patient with ties to the Viet Cong. The political organization and army fought the United States and South Vietnamese governments in the Vietnam War. The patient needed a right knee replacement. The patient was suspicious of Americans.

“He had this long beard,” Dr. Brander recalls. “And he was grouchy.”

The Operation Walk Chicago team went to work. Following the surgery, Heather McKinley — a physician assistant and former center-midfielder on Glenbrook South High School soccer teams — gave the patient a thumbs-up. A grouch no more, the patient insisted on having his picture taken with McKinley. They smiled together. Click. They hugged.

“He told me, ‘What your group did for me has changed my mind [about Americans] forever,’ ” McKinley says.

The group’s missions do not start and end on operating tables. They introduce rehabilitative programs for the patients. They educate local orthopaedic surgeons. They assist in a country’s development of programs designed to reduce arthritis-related disabilities. They partner with in-country clinicians to establish arthritis care that is practical and sustainable.

“It has been a privilege to be a part of something like this,” says Dr. Lalit Puri, division head of adult reconstruction for North Shore Orthopaedic Institute and a part of nine Operation Walk Chicago missions. “Patients show a great amount of gratitude. Great warmth is generated. The interaction between patients and volunteers is rich, always rich.

“It takes a tremendous amount of teamwork each time we enter a country, and we’ve gotten better at it,” the Glenview resident adds. “The number of things we do, the number of people doing what they need to do … it’s like an orchestra.”

Among the indelible memories Dr. Puri absorbs on each mission are patients’ looks moments before surgery. He detects relief from them. He sees hope — a feeling many of the impoverished hadn’t experienced in years, perhaps decades.

“There’s a tremendous amount of calm in their eyes,” he says. “It’s a remarkable peace. My sense is, they’d been through so much discomfort that they’re willing to take on something as major and as challenging as joint replacement surgery. They show a great deal of courage.” 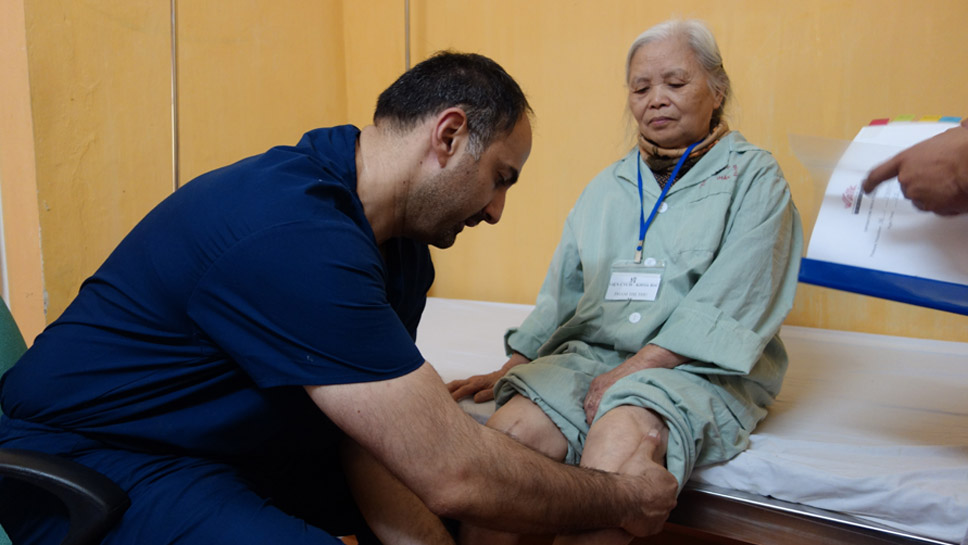 A significant amount of the money donated annually to Operation Walk Chicago comes from joint-replacement patients who live on the North Shore and other parts of Chicagoland. Most feel completely different after surgery. They are optimistic again, mobile again, on the road to a pain-free state. They find themselves in a giving mood. Their generosity makes similar surgery possible for people near and far, from an uninsured Chicagoan to a disabled electrician in Kathmandu.

“They went through the experience of a hip or a knee replacement surgery, and they want somebody else to be able to experience it and benefit from it,” says Dr. Stulberg, the Operation Walk Chicago cofounder. “Patients and donors from here wrote letters to the patients in Vietnam. In the letters they described a procedure and their experiences as patients. They let the patients in Hanoi know what to expect. We read those letters to the Vietnamese patients when we were there.”

Operation Walk Chicago plans to upgrade a hospital in Nepal later this year. Time also will be devoted in 2015 to prepare for a clinical mission in Brazil next year. It typically takes at least nine months to fully corral all the moving pieces of a major mission, to sort its critical details, to streamline its logistics. It takes time to hone an orchestra.

Another band of Operation Walk Chicago volunteers will return to Hanoi in 2016. More hips will be replaced. More knees will be replaced. A certain 28-year-old man — who has functioning hips now, who is bedridden only when he is tired now — is expected to undergo two knee replacement surgeries.

One of Dr. Brander’s favorite stories just got better.

For more information on Operation Walk Chicago or to donate to the organization, please visit www.operationwalkchicago.com.