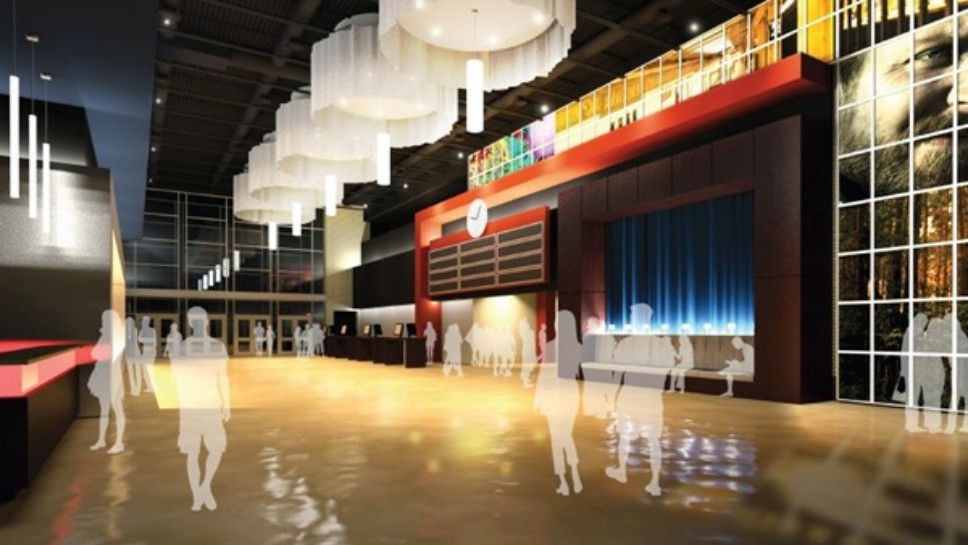 ArcLight Cinemas is making its Chicagoland debut at The Glen Town Center this May, company officials revealed at a Village Board of Trustees meeting on April 7, which discussed granting a special liquor license for the theatre. The sale of alcohol is just one of the enhancements the California brand brings to the movie theatre experience.

“We are going after the sophisticated movie patron,” said a director about the new location that is currently under construction to completely overhaul the former Glen Stadium 10. A Chicago location in Lincoln Park is also expected in October.

In addition to the bar there will be a café with gourmet cuisine and the perk of reserved seating with pre-purchase online tickets, through apps or on-site kiosks. The 10 movie theatre screens will also be enhanced with state-of-the-art THX resolution and sound a “black box” design that allows for undistracted viewing. Seats are also non-standard, measuring three inches wider than standard theater seats, with double-wide arm rests, and an average of 46” of legroom, according to the company’s website.

“We bring a complete connection to cinema,” said the official, a point that is also relevant in the choices of film programming. In addition to newly released Hollywood hits will be a selection of specialty art films and re-screened classics, 21-and-over-only screenings, Q&A events and an ArcLight Presents series with limited releases and exclusive content.

All movies will be screened with as few disruptions as possible. There are no commercials and limited trailers before the showtime; as well crew members do routine check-ins to ensure there’s no talking, cell phone use or late entry. A membership program also exists giving participants $1 off each ticket price and the ability to accumulate points.

The Board of Trustees was welcoming to ArcLight and moved on the motion to allow for alcohol sales with some provisions: There will be a limited service area, customers can only purchase one drink at a time and there will be designated, clear cups for any alcohol-based drink. The language on the closing time of liquor sales is still being discussed, though it looks like the theatre will most likely be able to serve until 1 a.m. Look for the ArcLight to open around May 1.

Other items discussed at the board meeting included the appointment of lawyer Neda Brisport to the Appearance Commission as well as two town proclamations for Glenview Arbor Day on April 24, 2015 and designating April 12-18 National Library Week.

To celebrate, the Glenview library will offer a series of special events that week, including a viewing of the Roger Ebert documentary “Life Itself” on April 12 at 1:30 p.m.; a performance of Bram Stoker’s “Dracula” by storyteller Megan Wells on April 14 at 7 p.m.; a Patron Appreciation Reception on April 16 at 2 p.m.; teenage-driven Cappuccino and Conversation at the Glenview Grind on April l8 at 2 p.m. and a Genealogy Research Day on April 18 at 1 p.m. For more information visit glenviewpl.org.