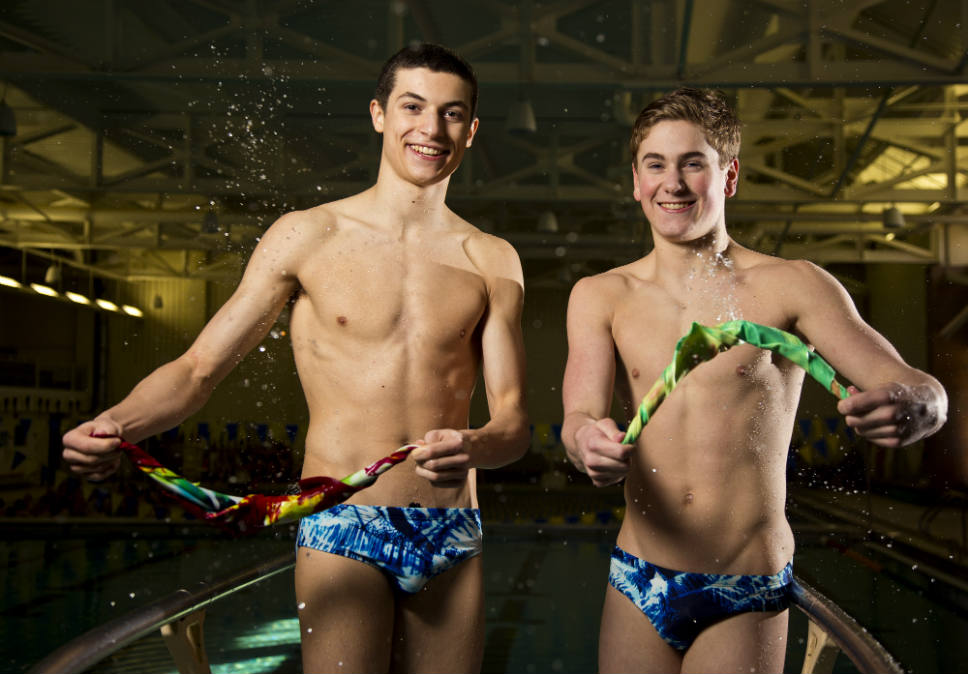 Lake Forest High School’s John-Michael Diveris (left) and Alex Streightiff twirl their shammies. They are two of the best divers in the state. Photography by Joel Lerner

Aaron Ach sits in a classroom at Glenbrook South High School. A teacher speaks, instructs. Ach, a senior and one of the top divers in the state, hears the voice, but he does not listen to it. He visualizes instead.

It is the day of a diving meet, maybe the day before a big diving meet.

He sees himself hurdling near the end of a diving board. The 5-foot-7, 160-pounder also sees himself bouncing off the board and soaring and flipping and twisting and entering a pool of water headfirst.

The mental splash he envisions is a small one. It is a diver’s favorite kind of ending to a difficult plunge. 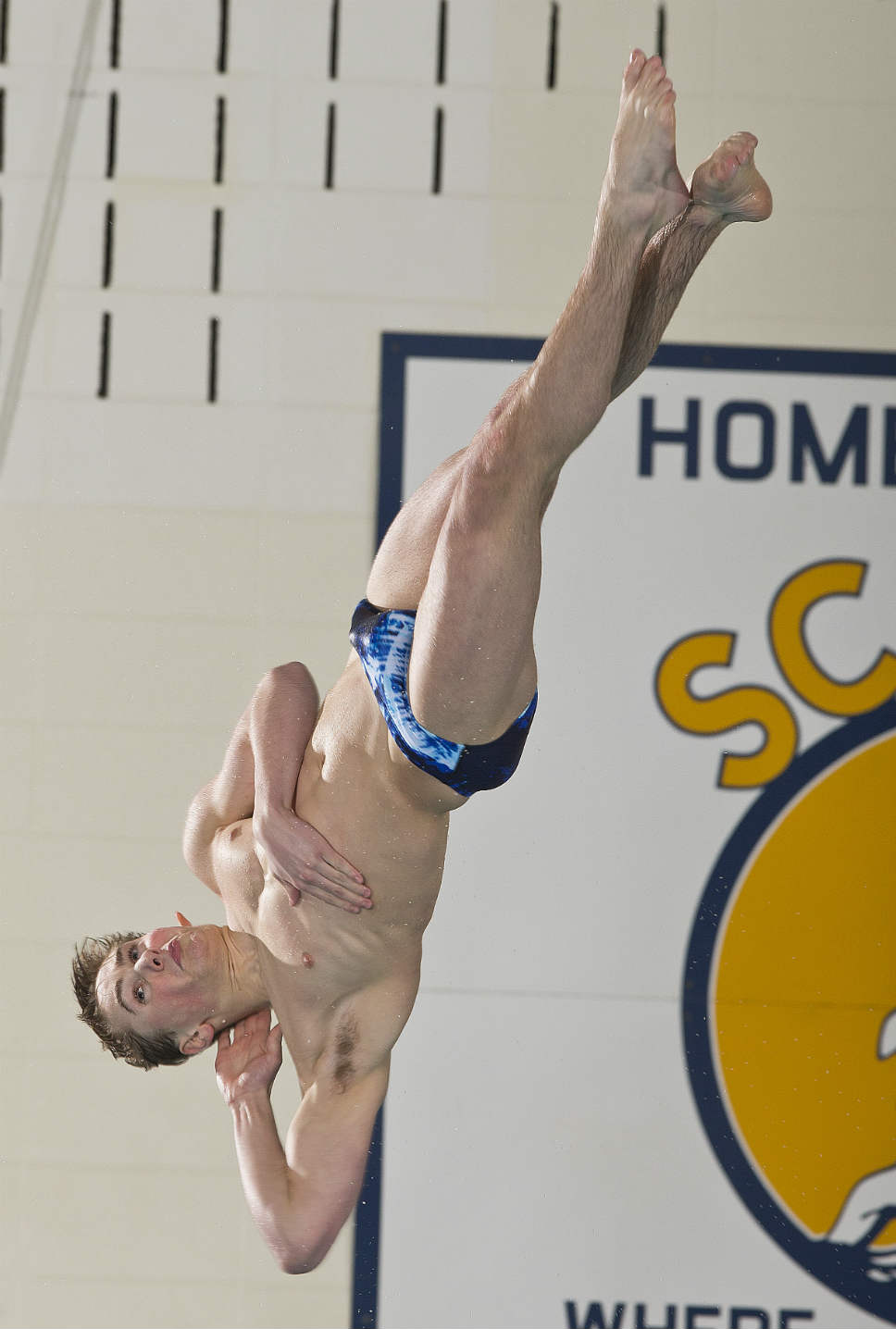 Ach blinks. He is back, fully focused again in a classroom.

“Sometimes my mind does wander in school,” Ach admits.

Princeton University accepted that mind. Ach — head to pointed toes — will dive for the Tigers.

Visualization for elite divers is critical to their success. It ranks right up there in importance with the physical aspects of the acrobatic sport. Top-flight divers lift weights. They need to develop strong legs. They need to form snare-drum taut cores, for all that flipping, for all that twisting.

Not everything, though, can be created in a weight room.

“What divers also need to have is good space awareness, an awareness of where their bodies are, at all times, during a dive,” says Deerfield High School diving coach Doug Foerch, also a gymnastics coach.

Fearlessness comes in handy, too. A quivering diving board sometimes gets in the way of a descending diver. Picture the back of the seat in a plane getting in the way of a plummeting piece of a luggage from an overhead bin. Ach broke two fingers and a bone in his hand during a dive at his final state meet in February. His back banged a board at another meet. 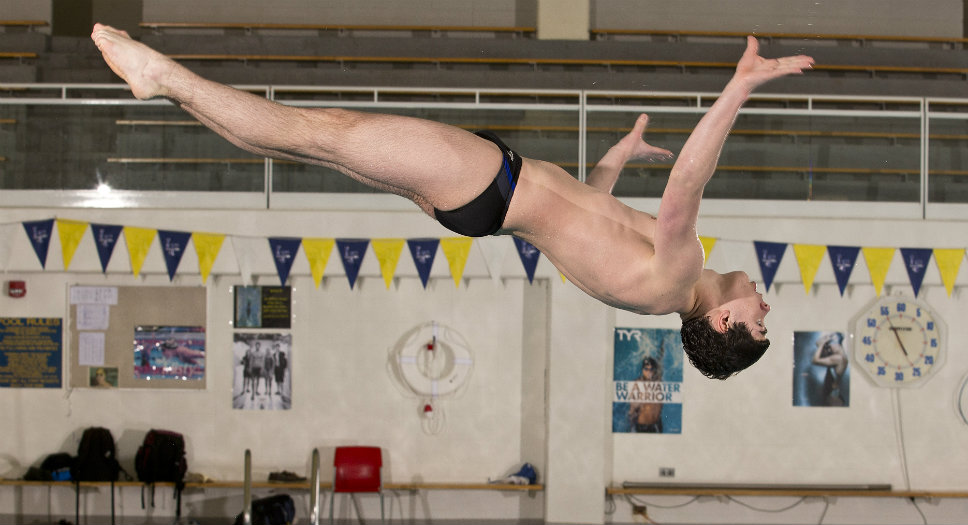 “It can be a dangerous sport,” Foerch says. “It takes guts. Boards are metal. You hit one, it’s going to hurt you. There’s a lot of pressure when you’re up there, getting ready to dive. If you bounce off the board, and you’re off — just a little off, to the left or to the right — you’re in trouble. That dive, the one you had hoped would get you 7s from judges, gets you 4s or 3s instead.”

Ach, seventh at the 2014 state meet, had qualified for the 2015 state meet with a sectional score of 590.75, second among all qualifiers to eventual state champion Joey Cifelli of Marian Catholic. Those injuries to his hand kept him from advancing to the finals session. 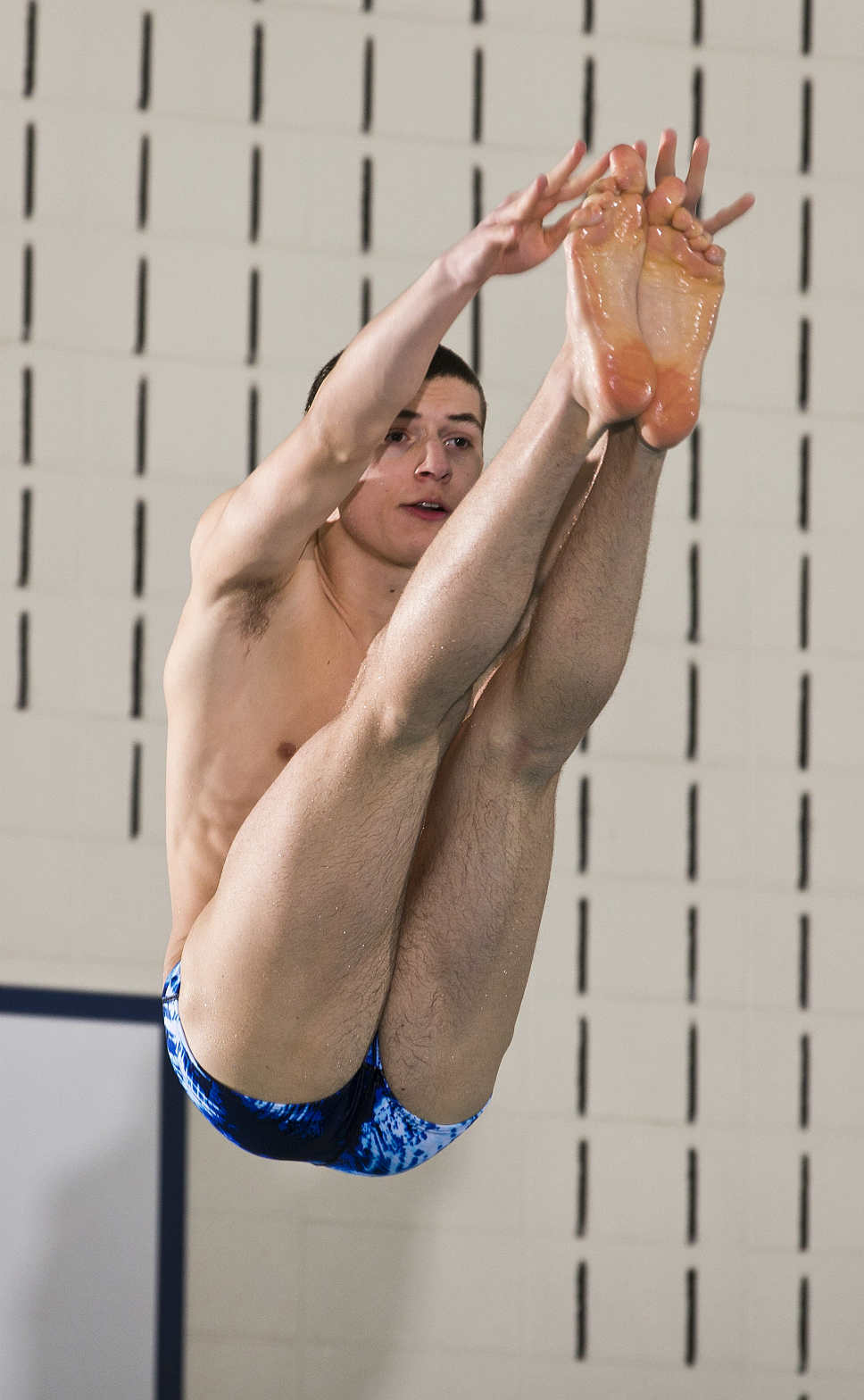 One of the prerequisites for the staging of the state diving finals in recent seasons was not a quorum of qualifiers from North Shore schools. But it sure appeared to be.

“Coaching,” Diveris says, referring to one of the reasons for the sustained success of North Shore divers at state meets. “Hardworking athletes, the number of diving clubs … those are other reasons. Another factor is the support we get from divers who dive for other schools. We see each other all the time, during the high school season, during the club season. We cheer for each other behind the boards at meets and say, ‘Nice job,” or, ‘Great entry.’ It’s such an individual sport, and there’s an appreciation we all have for what a diver goes through before competing dives at meets and what a diver goes through during meets.” 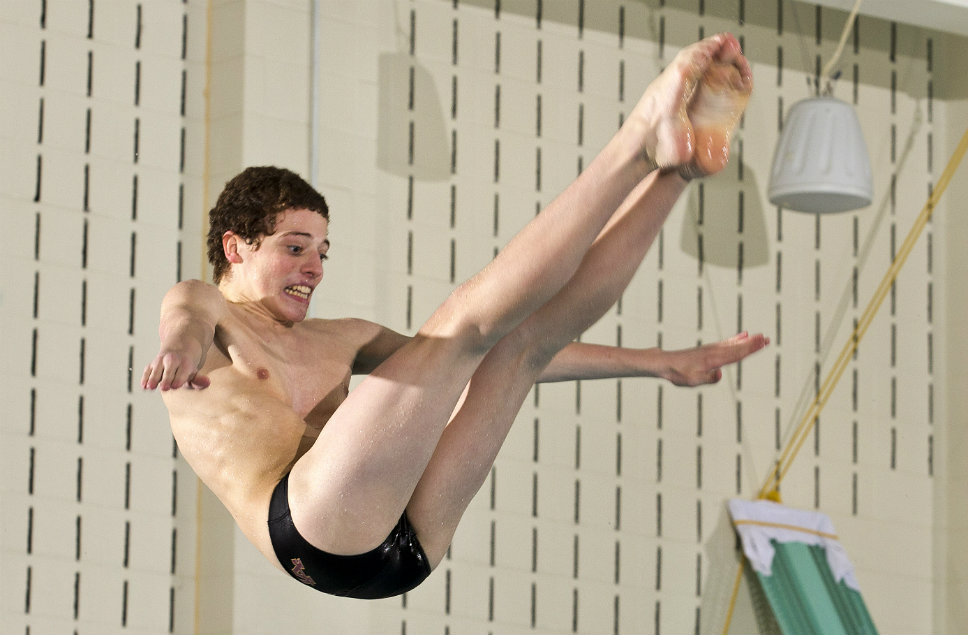 “There are some phenomenal coaches in the area,” says Streightiff, whose path to varsity diving at Lake Forest HS started on a trampoline in a backyard; Alicia Streightiff noticed her son, then an eighth-grader, looked comfortable near treetops and suggested the pursuit of the discipline. In only his second year of competitive diving, Streightiff placed 13th at the state meet as a sophomore.

It was not easy, Streightiff’s entry into the world of diving. It never is, for any diver. It is a world filled with daredevils, Evel Knievels without motorcycles. Daredevils never bat 1.000. Diving daredevils sustain smacks, countless smacks, mostly at practice sessions. They represent a painful part of the game, like hand rips in gymnastics, like mat burns in wrestling. A smack is the sound of a dive gone awry. It is the sound of an out-of-control body hitting water, and the result is usually a red badge of discouragement. A smack makes some spectators cringe.

“I’ve seen welts after bad dives … red marks, with white lines in the middle of them,” Foerch says. “Faces get injured. I’ve seen bloody noses. I once saw a kid break his nose during a dive. I’ve seen black eyes. When a diver’s face smacks the water at about the same time as the diver’s feet do, it’s tough to watch. 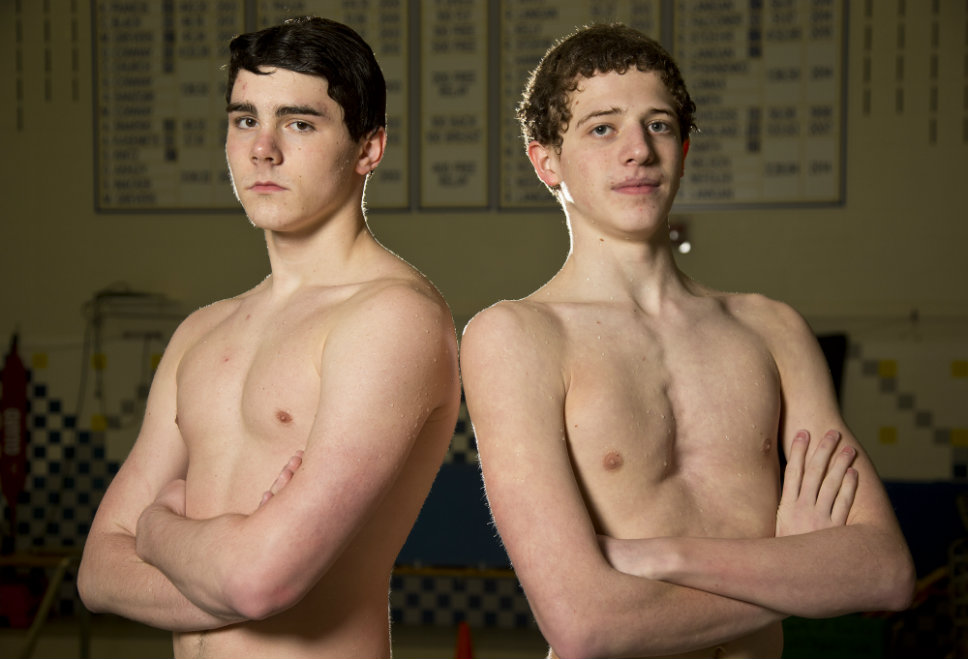 A sensational dive is a thing of beauty, high and tight and fast and all straight. Divers seek to make sure their shoulders, hips, knee and ankles do not produce a hint of an angle during a plunge. One of smoothest divers around is Loyola Academy’s Canning, a 5-11, 150-pounder. The Wilmette resident and Chicago Dive Club member is as technically sound as they come, an athlete who makes highly difficult dives look layup-vs.-nobody easy. Canning’s kinesthetic awareness reached a brimming level at an early age, probably a day or two after his first successful step as a toddler. What also separates him from other divers is the rhythm of his hurdle on the boards. Canning’s balanced, measured approach generates the fluidity he needs to execute a clean dive.

Canning finished runner-up at his very first meet, held at the University of Illinois-Chicago. He was 11. He traveled to another state for his next meet, a test against a region’s best. He was still 11. Canning competes regularly at USA Diving meets.

“I’m not a fast learner,” he says. “I’m not a slow learner. I’m a average learner. Challenges in this sport include changing a dive or learning new dives. It’s nice having great coaches in the area. They show you, teach you. They believe you can do the new dive. They assure you everything will be fine.

“One of the most rewarding parts in diving,” he adds, “is doing a new dive at a competition and realizing the hard work paid off.”

Divers, to some, are considered the “punters and kickers” of a swimming and diving team, athletes — specialists — who get the “second-class” tag because they typically practice together and away from the significant majority of their teammates, sometimes out of necessity (it’s hard and unwise, after all, to simultaneously dive and dodge swimmers doing laps). It is an unfair label. Some people forget kickers win football games. Some people forget punters aid defenses. 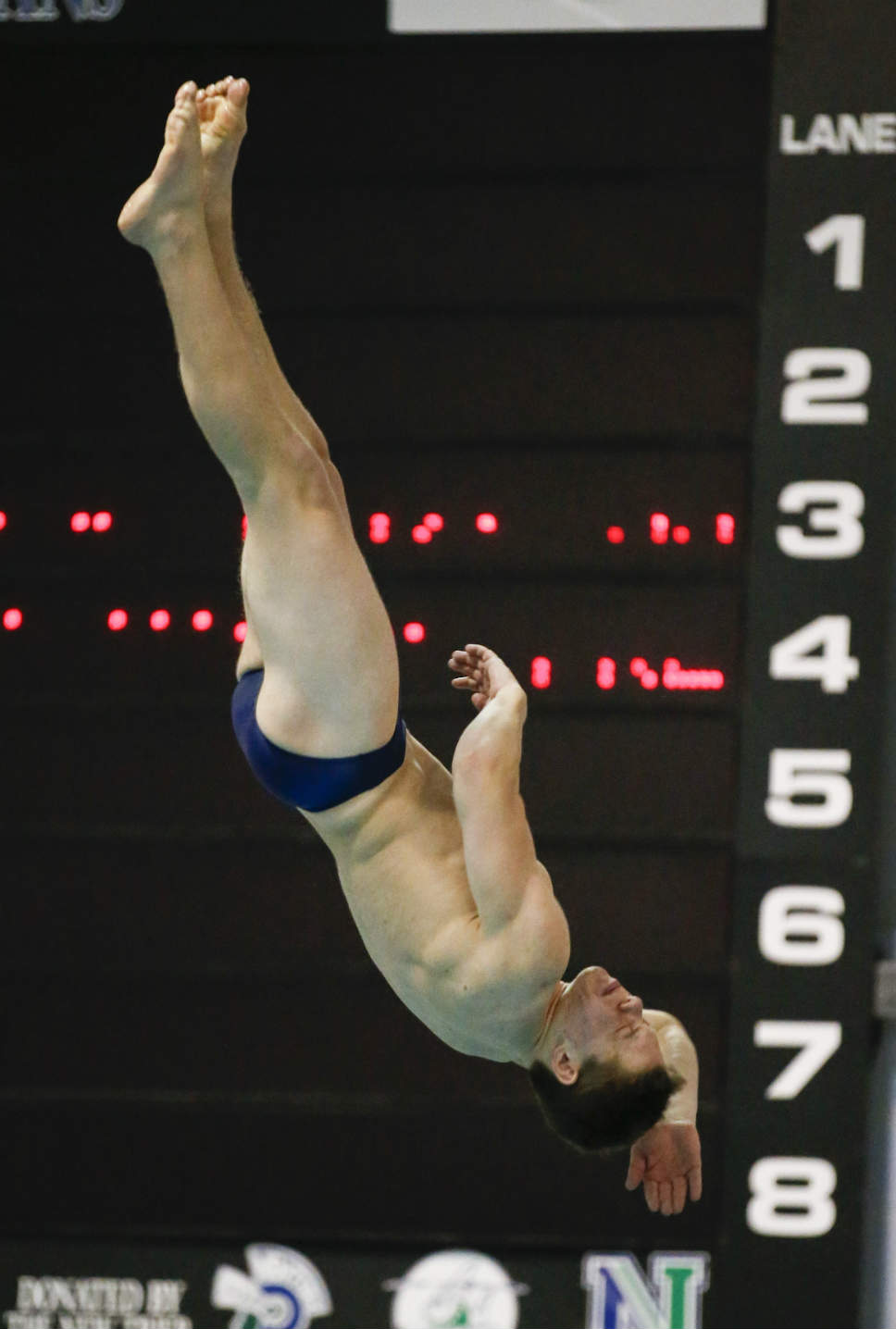 “Our swimming coach [Lake Forest High School’s Cindy Dell] makes sure she includes the divers whenever the team is discussed,” Diveris says. “She appreciates the team’s divers. She knows we score points for the team. Our motto [in the 2014-15 season] was, ‘One team, one dream.’ ”

Nash was named a team captain of Loyola Academy’s swimming and diving team before the start of the 2014-15 season. The leadership role gave him opportunities to spend time with the team’s swim captain and swimmers. The team’s swim captain and swimmers listened to Nash, respected Nash. It would have been impossible not to respect Nash, if a swimmer had watched what Nash or Canning or any Ramblers diver does during a practice.

“We practice hard, really hard, each day,” says the 5-9, 135-pound Nash, a Kenilworth resident. “Each practice involves a lot of repetition. We review tape of dives with our coach, watching it in super-slow motion at times. Everything has to be precise in this sport. It’s a sport for perfectionists.”

It is good to have a bad memory in the sport. Divers dive six times at dual meets, 11 times (if they survive cuts) at bigger meets. A diver’s blown dive early in a meet becomes a disastrous dive if the memory of the blown dive lingers during the next dive. And the one after that. And the one after …

“Attitude, having a positive attitude, is important in diving,” Glenbrook South’s Ach says. “Divers who are mentally tough generally have positive attitudes and look ahead. My coach [Duffy] likes to stress that success at meets comes from being strong mentally, from having the right attitude during each dive. How well you dive in the warm-up [session] means little.

“You have to be willing to think of a big meet as a series of 11 one-dive meets,” he adds. 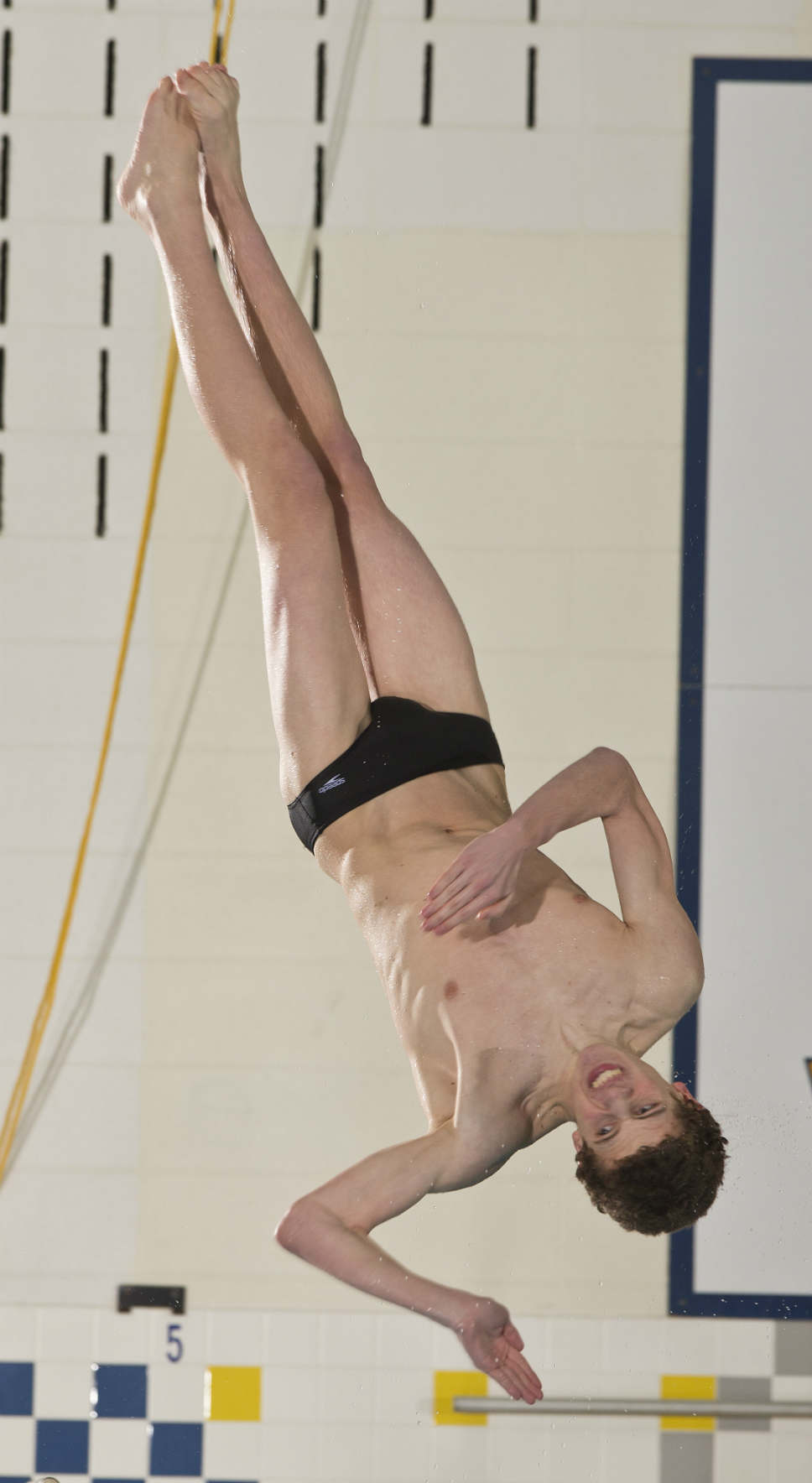 A big meet for Ach, before he became an eighth-grade student, required the execution of giants and double-leg circles and dismounts. He toiled and competed atop gymnastics mats for seven years. Diveris also chalked up in gyms for years, before a torn right labrum (a shoulder injury he suffered during a still-rings routine) turned his attention to diving and its tight-knit fraternity.

“I enjoy diving,” Diveris says. “I definitely like the feeling of flying, the height, the view of the water when I’m up there.”

A focused, unblinking diver stands on a board at a meet, poised and ramrod straight. He is a Buckingham Palace guard, minus the furry, bearskin hat and red-and-black uniform. The natatorium, filled with spectators, is silent. He takes a step, then another, then another. The hurdle to his front-two-and-a-half dive follows. He bounces off the end of the board. He takes off. He flips, spins fast. He enters the pool headfirst, his frame returning to ramrod-straight form.

The crowd erupts, releasing a mixture of applause and appreciative roars. The diver’s head resurfaces. The reaction from the spectators sounds different to him than it did when he was underwater. It is clearer now, louder. He glides toward the edge of the pool, eager to hear how the judges graded his aerial show. His artwork.

“People who watch dives at meets and aren’t all that familiar with the sport, see a dive and tend to think, ‘OK, that looked good,’ ” Foerch says. “They might even think, ‘That looked pretty easy.’ What they don’t realize is what that diver went through, at practices, to get a dive to look like that, to look that good. That diver probably had to overcome 20 to 30 smacks to his face, to the back of his legs, to other parts of his body.

“There’s a lot going on in diving, mentally and physically,” he adds. “It takes a special type of athlete to be a successful diver.”