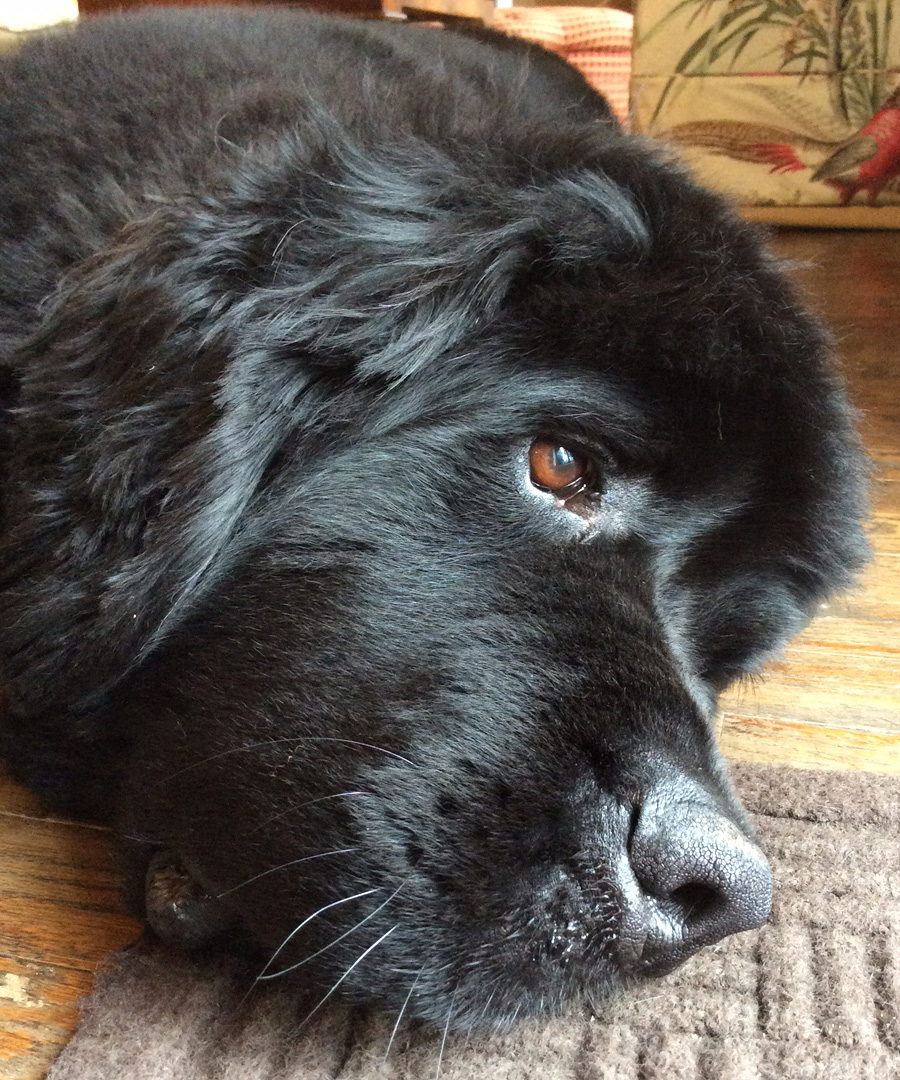 George, a Newfoundland who’s not feeling well, recuperates in his Lake Forest home.

It’s flu season — for dogs.   North Shore veterinarians, boarders and others are warning residents to be on alert. Since February, a rare case of Canine Infectious Respiratory Disease (CIRD) has hit the Chicago area and is now at epidemic levels, topping more than 1,000 reported cases, according to the Cook County Department of Animal and Rabies Control.

Five dogs in the Chicago area have died from the virus (though Daily North Shore has not learn of any deaths on the North Shore), and that has prompted many people to take precautions against further spread of the highly contagious bug. Several area PetSmart locations closed their pet hotels. Green Bay Animal Hospital in Wilmette sent e-mails to clients warning of symptoms, which include a dry hacking cough, oral discharge that is white, foamy, green or yellow, lethargy, nasal discharge, possible fever or loss of appetite.

At BluePearl Veterinary Partners’ hospital in Northfield and its others in Skokie and Elk Grove Village, 40 cases have been seen in the last week.

Dr. David McKenna of the Animal Hospital of West Lake Forest said he has seen an increase of symptomatic dogs, but his team has not made an actual diagnosis of CIRD because the test is expensive. Nonetheless, due to the outbreak they are treating dogs accordingly.

The CIRD outbreak has been especially hard on dog boarding and daycare facilities.

“Right now, people need to assume that anywhere they board their dogs there will be a very high likelihood that the dog will go home with the flu,” said Betsy Puterbaugh, owner of Yuppy Puppy, a dog daycare and boarding facility in Lake Bluff that had four dogs out of 60 become symptomatic during a busy spring break period last week.

Puterbaugh has had a number of cancellations after encouraging clients to keep their dogs at home for a few weeks to eliminate possible exposure. In the interim, she has also offered kennel attendants to go to client homes to provide home boarding and dog walking services. Her son has personally taken a few sick dogs to his home for owners with longstanding travel plans who have no other option; his roommate is a vet tech, which helps him keep a close eye on the patients.

To get Yuppy Puppy back to good form, Puterbaugh has been steaming and disinfecting every hard surface in the facility each night with a disinfectant and has UV lights in the air ducts that kill off viruses. She has also been switching out dog water bowls and requiring kennel attendants to wear newly laundered clothes every day.

“The biggest problem is that dogs play with their mouths so it’s beyond just the air they breathe. There is absolutely nothing more that we could have done to keep this flu virus out of our facility,” she said, noting that when her team discovered the symptomatic dogs, they placed them in an isolation room together where they were cared for away from other dogs. Owners were able to check in on them through Yuppy Puppy’s webcam system.

Dogs can be sick but not show symptoms, so “when a contagious dog walks through your door, every dog that comes near it the next 3-10 days is now 100% percent guaranteed to get the flu. It’s a vicious cycle,” she said.

Brenda Belmonte, manager of the Animal Hospital of West Lake Forest and professional dog trainer/owner of Two Paws Up in Lake Bluff, said the last time there was a known outbreak was 2008, but it was much less widespread. Her dog-training firm has seen several cases in the past 10 days and, as such, has suspended all classes in Lake Forest and Lake Bluff until at least Monday, April 13.

Dogs that have recently spent time in high-density facilities such as dog parks, day cares, and kennels are already at risk of contracting CIRD because many dogs have not been vaccinated properly. Belmonte said there is a vaccination specifically for dog flu but it is not a core vaccine by the American Animal Hospital Association, and it must be given in two doses, two to three weeks apart, before the dog is protected. Also, vaccinating a dog that was previously exposed, or is already showing symptoms, will not prevent the disease nor is it a guarantee that the dog won’t get sick.

“Like the flu vaccine in people, it can lessen the severity of symptoms,” said Belmonte, who suggested that owners should contact their veterinarian to see if the vaccine is an option for their pet.

Dogs with poor immune systems, puppies and senior dogs are more at risk of developing complications, according to Belmonte. Though death from dog flu is rare, when it does happen it is likely because the disease has progressed to pneumonia.   Belmonte’s tip is to keep dogs at home and hire a pet sitter if necessary, which is in line with the Illinois State Veterinary Medical Association’s recommendation that any dog with a diagnosis or possible exposure should stay on home quarantine for three weeks to avoid spreading dog flu.

Some dog-care facilities have managed to stay clear of CIRD so far. Both the Heartland Animal Shelter and Doggie Do-Rite Daycare facilities are open in Northbrook, as is Lake Forest Kennel Club in Lake Forest.

“There are no known cases here at Heartland Animal Shelter, but because the influenza virus is so contagious we are taking all the precautions we need to protect our animals and minimize exposure to them,” said Dr. Kristine Preiser, Heartland’s medical director. Healthy dogs are available for adoption and regular hours are being honored for interested parties, who are encouraged to come into the facility. To be safe, Heartland has cordoned training classes off to their pet residents for the time being.   “We will notify the community when training classes are open to the public,” said volunteer coordinator Janice Greenberg.

Doggie Do-Rite Daycare has not been directly impacted by CIRD but as a precaution the facility is not accepting new dogs at this time.   “We’ve also sent messages to our clients to keep them informed that it is going around and asking that they do not bring in their dog if it is sick whatsoever,” said owner Stacey Findley. Some have already taken their dogs out of the facility for the time being, and typically busy days have slowed down, though Findley expects business to get back to normal in the coming weeks as the virus gets under control.