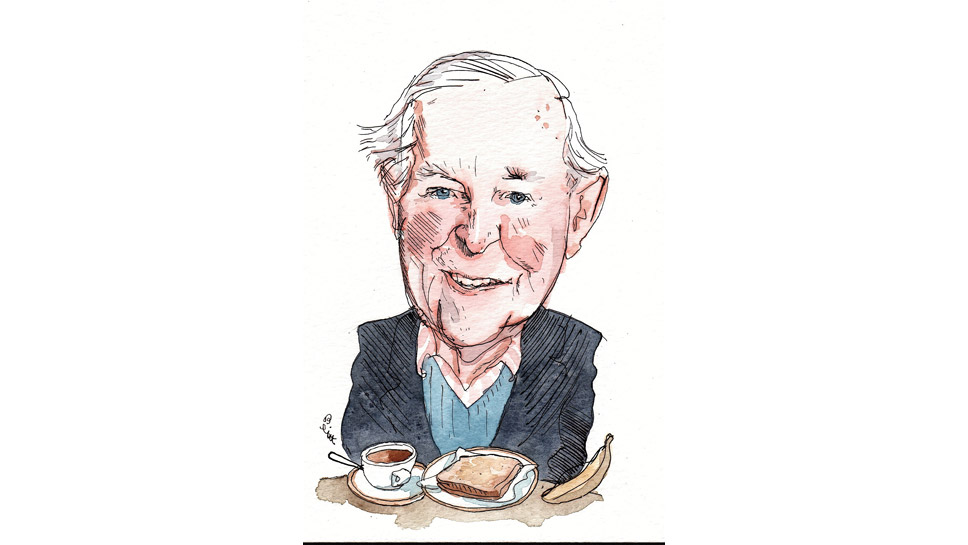 World champions are as rare as white peacocks. Few sports even proffer such a grand title.

Even more uncommon is a world champion who holds the crown across decades.

Geoffrey Atkins first captured the world rackets championship the year after Queen Elizabeth’s coronation and relinquished it only after The Beatles broke up. The Englishman’s reign from 1954-1972 has not been matched since.

“I was excited by the speed of the game, the satisfaction of getting hard shots back, and the exhilaration of hitting the ball in the sweet spot of the racket to see it rocket away for a winner,” recalls Atkins, a former resident of Lake Forest.

Now 88, the former world’s champion lives on Hayling Island in England. He played the sport until a few years ago, when a knee replacement ended his days on the court (and, to his chagrin, his golf game as well).

For the uninitiated, rackets is an indoor game that features a rock-hard ball that flies at such high speeds off walls that men could be killed by it.

“As the game is quite dangerous, you have to concentrate. There wasn’t much fooling around on the court during a match,” Atkins says.  “Of course there were many raucous parties during tournament weekends, but as I was often playing in the semifinals and finals on the Sunday morning, I had to take it quite easy.”
At Rugby School in England, Atkins played squash, cricket, field hockey and rugby. During that time, the school’s two racket courts often sat empty. During his final year, “I thought it would be interesting to have a try,” Atkins says, “and I asked the pro, a 70-year-old man called Harry Grey, if I could have a hit.”

Atkins ended up practicing for hours on his own until he mastered the speed of the ball and the angles of the court. He soon began to play competitively.

“Rackets is a challenging game technically, where anticipation, footwork and precision are essential, and there is no room for error,” he notes. “I felt a strong sense of achievement in pulling everything together and playing this difficult game well.”

During a tour in the British army, his company commander at Sandhurst, Ronnie Taylor, served as a big rackets influence. They won the army doubles championship four years in a row. By the early 1950s, Atkins’ game was honed close to perfection. He won the British Amateur Singles in both 1952 and 1953 while also claiming the American and Canadian Amateur singles titles during the same period.

It was time to challenge the best, incumbent world champion Jim Dear, the professional at Queen’s Club in London. A sporting legend, he was not only the world champion at rackets but also of real tennis. At the same time, he held the British Open squash title.

“I didn’t expect to beat him,” recalls Atkins, “but thought I would give it my best shot.”

Living in Chicago at the time, he travelled to England to play the two legs (each leg being the best-of-seven games) over consecutive weekends at Queen’s Club.  During the first leg, Atkins stunned the world champion by winning the first three games, as Dear could not handle his opponent’s underarm twist serve. Atkins prevailed in the first leg 4-1; even if he lost the second, two game wins during the leg would give him the crown.

Dear, though, notched the first three games. One more victory, and he retained the title. But Atkins won the next two, becoming the new world champion. To top it off, he married Philippa Fulljames days later, and they enjoyed their honeymoon on the QE2 back to America.
Atkins successfully defended his title throughout the years against James Leonard and Charles Swallow. He chose to resign as world champion in 1971 and, by January 1972, another player succeeded him. On the 50th anniversary of seizing the world rackets championship, Atkins was feted at the Racquet Club of Chicago, which still sees play on its two courts (only eight remain in the United States, though a century ago Chicago itself featured as many). He is an honorary member of that club and the Montreal Racket Club.
Atkins’ tournament victories in singles and doubles number in the dozens, and he is most fond of winning the Tuxedo Club rackets tournament in New York for three consecutive years over two different periods, entitling him to keep the two gold racket trophies — his most treasured ones — for the achievement.  He fondly remembers Philadelphia Racquet Club member Stanley Pearson, a top American, as well as Billy Wood-Prince, his boss when Atkins worked in Chicago and his partner when they won the U.S. amateur doubles tournament in 1954 and 1955.

Atkins stays busy by swimming in the sea in the summer and sunbathing when the weather is nice. Though a late riser who’s not much of a breakfast enthusiast, he does enjoy a cup of coffee and a banana or piece of toast and, when it’s warm, eats in the garden overlooking the sea. A member of the All England Club, “I get to watch a lot of great tennis during the Wimbledon tournament every year,” he notes.  His son Nick and daughter-in-law Rowena live in London along with his grandchildren Matilda, Lilah and Eddie. They visit him frequently, “which keeps me busy and on my toes when they stay,” Atkins says. Daughter Lucinda Sheffield, son-in-law Tom and grandchildren Charlie, Henry, Sam and Pippa live in Lake Bluff and always enjoy their trips to England to visit him.

Though he no longer plays the sport he once ruled, he carves out time to attend tournaments. Says Atkins, “I still enjoy going to watch rackets being played at the highest level whenever I can. Rackets has been one of the most important influences of my life.”