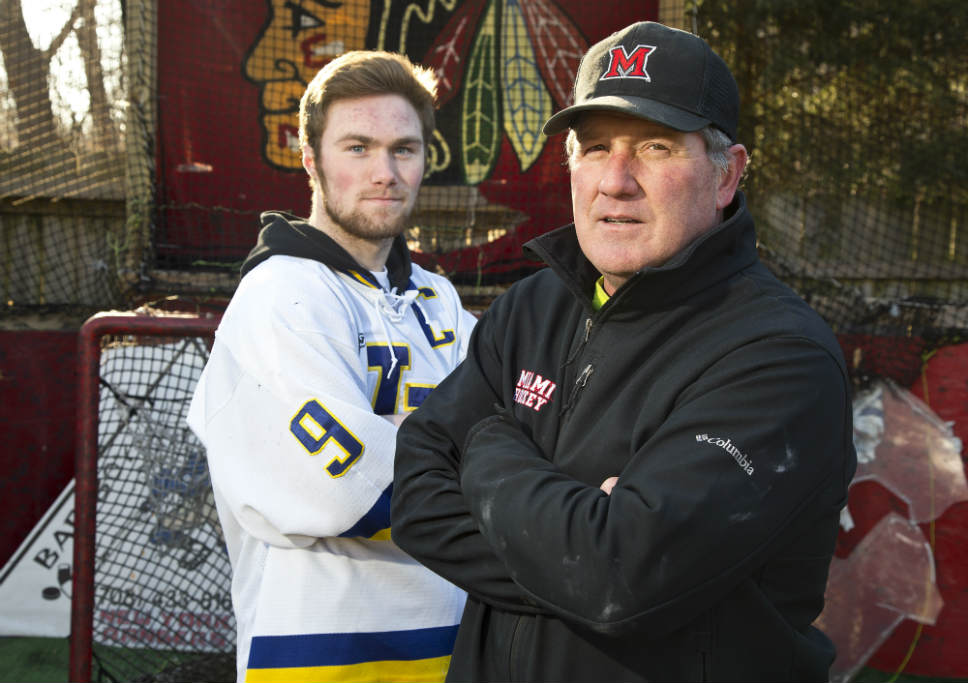 John Murphy enters Buffo’s Italian-American Restaurant in Highwood, his hometown. He is restless. He looks up at the televisions in one of the dining areas, hoping the Yale-Boston University NCAA men’s hockey playoff game is on one of them. Nobody is watching hockey. He sees to it that somebody changes the channel to ESPNU on one of them.

“It’s in overtime,” the Lake Forest High School boys hockey coach says, as he finds a seat near the only TV that matters to him.

BU ends up winning 3-2. The 54-year-old is interested in the game because his son, Cody, is a senior forward on the Miami (Ohio) University hockey team. Miami, a top regional seed, will face Providence in another Sweet 16 game in about 26 hours.

Illinois Hockey inducted John Murphy into its Hall of Fame (players’ category) in late January. A 1978 Deerfield High School graduate and DHS Athletic Hall of Fame inductee (for football), Murphy played Junior hockey in Canada and for affiliates of two NHL teams. The Pittsburgh Penguins and Chicago Blackhawks invited the left winger to training camps in 1981 and 1982, respectively. One of his professional teammates on an International Hockey League club (Muskegon Mohawks, in Michigan) was Jeff Carlson, who portrayed one of the Hanson brothers, Jeff, in the movie “Slap Shot.”

“Jeff Carlson,” he says, “still has long hair, like he had in the movie,” says Murphy, also an instructor at Hot Shots Ice Arena in Lake Bluff and a painting contractor.

With the Yale-BU game no longer airing in Buffo’s, Murphy turns his attention to fielding questions, mostly hockey questions, before looking forward to his flight the next day — to his son’s Sweet 16 playoff game in Rhode Island. (Miami would lose 7-5 to host Providence; Cody Murphy scored the first goal of the game).

Q: What is next for your son?

A: He was invited to participate, as an unrestricted free agent, in the Washington Capitals’ prospects camp in late August. The Capitals will play against the Tampa Bay Lightning. The camp lasts two weeks. The hope is for him to sign a contract with Washington before then. Cody’s agent is Kevin Magnuson [son of the late Keith Magnuson, a Blackhawks defenseman from 1969-79]. Two of my son’s role models are his brothers [Andy Marsch and Ken Marsch]. They are Cody’s stepbrothers, but he calls them his brothers. They also played hockey at Miami. Andy and Ken were part of an alumni gathering at Soldier Field [on Feb. 6, the night before the Miami-Western Michigan University clash in the Hockey City Classic]. I had a great seat for the game. [Miami edged WMU 4-3 atop the Chicago Bears’ home football field].

Q: What is the difference between hockey when you played and hockey today?

A: The game has changed a lot. You have to be skilled to play [at the professional level]. You can’t get by on just toughness. You can’t play in the NHL without having skills … skills at a very high level.

Q: You played football (as a defensive tackle, linebacker and kicker) under coach Paul Adams at Deerfield High School. The Warriors’ 1977 team lost 8-0 to East Leyden High School in the Class 5A state championship game. What are some of your memories of Adams and that state runner-up squad?

A: Paul was the best motivator I ever had, a very respected football guy, a legend. I admire the heck out of him. I stay in touch with him. Another great coach in the program was Fred Harris [head coach of the sophomore team]. He played in the Rose Bowl [for Iowa, in 1957] with Alex Karras [later a dominant defensive tackle for the Detroit Lions]. Fred made sure we were ready to play varsity football. The year we took second in state, we allowed only eight points in the postseason — all in the title game. I got to scrimmage with the 1975 state championship team, as a sophomore. I was 195 pounds then, maybe 200.

Q: You played alongside one of the Hanson brothers [Jeff Carlson] from the movie “Slap Shot.” Do you have a favorite story involving him?

A: We were playing [for Muskegon] against Toledo. My father was sitting behind our bench. It was 1982. Pat Foley [the Blackhawks’ current broadcast announcer] was the announcer for the game. It was 25-cent beer night. A fan threw beer on Jeff Carlson during the game. Then, all of sudden, players went in the stands, looking for the guy who threw the beer. It was like a scene from the movie. I wish I could have heard Pat Foley describe that scene.

Q: You coached AAA hockey for many years [20] before taking the LFHS position seven years ago. Your best team?

A: The 1990 team [for players born in 1990]. We won everything. [Winnetka native and Arizona Coyote] Johnny Moore played for that team. So did Matthew Lindblad [Evanston, Providence Bruins of the American Hockey League], Josh Balch [Wilmette, Yale, Des Moines Buccaneers of the United States Hockey League], Conor Allen [Chicago Latin School, New York Rangers] and Steve Spinell [Vernon Hills native, AHL]. I also coached Jack Jenkins, a Lake Bluff kid. He played in the USHL, and he just committed to Notre Dame. We’re proud of him.

Q: [All-stater] Charlie Sullivan and Jack Hubbard served as your LFHS co-captains for the 2014-2105 season. Your thoughts on them?

A: Both are mature, so mature. You sit down and talk with them, their maturity is obvious. They enjoyed representing their school and competing at a high level. They represented the school well. Playing hockey — playing any sport — in high school is going to help you as a person. An athlete is held accountable. An athlete is a focused person, a person who works hard for something.

Q: How often do you instruct at Hot Shots?

A: Twice a week. I conduct stick spinning clinics there. It’s something I designed. It’s done in a confined area, at a high tempo, with eyes up. And it’s fun. Those four elements … all four are important.

Q: What was the banquet like when you were recognized as an Illinois Hockey Hall of Fame inductee?

A: I stood eight feet from [Blackhawks principal owner and chairman] Rocky Wirtz when I spoke. I looked at him and thanked him for his commitment to honoring our military personnel at Blackhawks games. My nephew [Keegan] was deployed in Fallujah during the Iraq War.