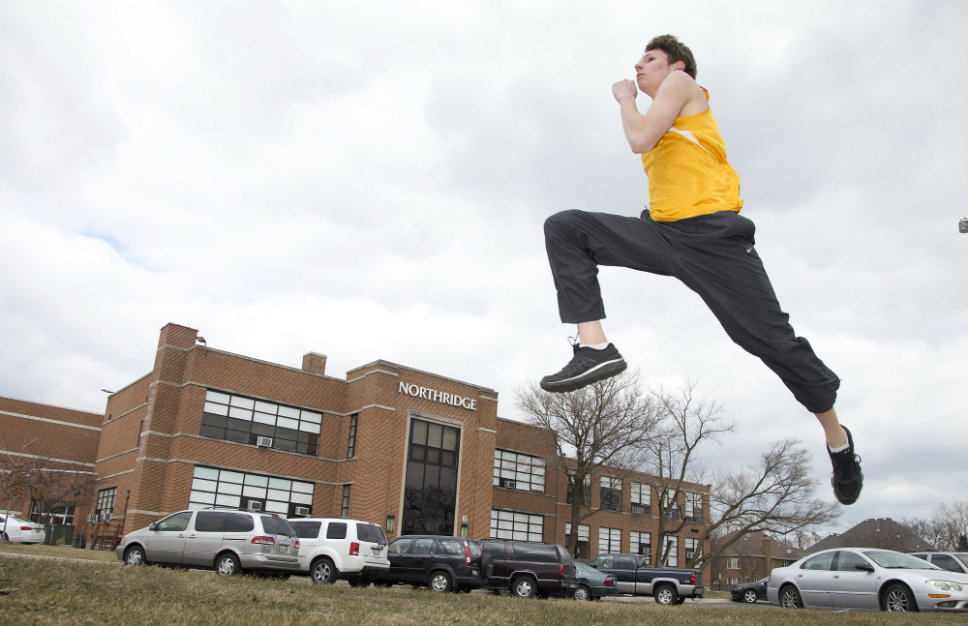 A basketball player shoots a basketball at a rimless backboard. A golfer putts a ball on a hole-less green. A tennis player hits a tennis ball over … nothing. The net is missing.

Forest Moses does not play basketball, does not play golf, does not play tennis for Northridge Prep High School in Niles. He is a senior jumper and hurdler for the Knights’ Class 1A track and field team. Like the three athletes in the previous paragraph, Moses, a Highland Park resident, has to deal with an unusual circumstance.

Northridge Prep High School (enrollment: 344 boys) does not have an outdoor track and field facility. It is difficult to jump over a bar and land on a squishy mat when a bar and a squishy mat are not budgeted each spring. It is unproductive to hurdle over a set of imaginary hurdles.

“Our team practices before meets — at the school that is hosting the meet.”

Keep that in mind when you attempt to fathom what the 6-foot-1, 155-pound Moses achieved at the Independent School League (ISL) boys track and field meet last spring. He took first in each of the high jump, 110-meter high hurdles and 300 intermediate hurdles events. He finished third in the triple jump. His personal point total added up to a school-record 36 for the team champions. Thirty-six points, one boy. The team title was a first for the program. Moses cleared 6-feet-5 in the high jump, another school mark. The old mark had belonged to … Moses.

“The most remarkable part of that day was that 6-5,” Egle recalls. “He had to be exhausted when he jumped; he had just finished a [hurdles] race.”

Moses received co-ISL Track and Field Athlete of the Year honors after the meet.

Several months later, the Road Warrior Forever hit the road again, this time for a trip to Maryland with his grandfather, Brian Green, a golf course superintendent for the Park District of Highland Park. The two drove to Landover for the 2015 USA Track and Field (USATF) National Hershey Youth Indoor Championships. The car had to tote extra cargo for the return trip home.

“I like to compete, and I like to jump,” says Moses, a three-time state qualifier in the high jump and a student at Northridge Prep since the sixth grade. “Good competition pushes me.”

Northridge Prep track and field teams as a hurdler and a jumper. He had held a number of program marks, before Forest supplanted them.

Three years ago, at a Class 1A sectional meet, the Moses brothers vied for state berths. Fisher Moses, a senior then, had a good shot at advancing to Charleston in the 300 hurdles but just missed qualifying. Forest Moses, meanwhile, extended his freshman season on varsity with a state-qualifying height in the high jump at University High School in Chicago.

“That day was an exciting one,” Green says. “It was also a sad and happy one. We were pulling for Fisher, really pulling for him. We were thrilled for Forest.

“Forest,” he adds, “has become a leader for the team since then. He’s helping the program accomplish some impressive things, some firsts, and the team is doing these things without being able to practice at a home track.”

Forest Moses, who lost his mother at a young age, has lived with his grandfather in Highland Park since 2002. Green attempted to erect a makeshift high jump station for Moses in his backyard. The intention was a sound one. It also was a thoughtful one. Have no track? Will try to improvise — at an entirely different home site. The execution of the plan did not go very well on Green’s acreage.

“The stanchions … they kept falling down,” says Green, a wrestler (119- and 126-pound weight classes) when he attended Highland Park High School.

Moses, named a team captain for the second year in a row, remains positive … and forward-thinking. Also a crack student and talented trumpeter for the school’s pep band, he is seriously considering a foray into the world of decathletes at the college level. The likely computer science major is looking at Drake University and the University of Indiana. Moses has no qualms about flinging the discus, about heaving the shot put. At one indoor meet this winter, Moses left a field house as the Knights’ top shot putter.

“I plan to try pole vaulting,” says Moses, who missed all-state honors by a spot when he placed 10th in the high jump (6-1) in Charleston last spring and took ninth (5-10) at the Illinois Top Times Meet at Illinois Wesleyan University in Bloomington March 27.

Moses soared in front of Egle at the Northridge Prep two years ago. He took off in a gym class one day, basketball in hand, no wind beneath his wingspan. He then threw down a dunk. Egle knew then, right then. Moses commanded attention.

“He’s got tremendous abilities and a tremendous work ethic,” Egle says. “Whatever he does, he does it at an outstanding level. He’s a star for our school’s pep band. He played the trumpet at a basketball game, on the night before an indoor track meet. He stood in the stands for three hours.”

“The high jump is one of the strongest events in IA,” Egle says. “The jumpers are right up there with the 2A kids, and they’re almost as good as the 3A jumpers.”

Moses will not be fazed, in the least, by the competition. It will be just another away meet for him.

He will feel right at home.