This Letter to the Editor was submitted by Peter and Robin Baugher of Wilmette. Letters to the Editor represent the writers’ opinions and not necessarily those of Daily North Shore.

Letter to the Editor: Just about everyone agrees the Park District’s Langdon referendum to build new toilets and staff offices on Langdon beach is unnecessary, out of scale, and an expensive, not-smart gamble that the lake will not further erode the already shrunken beach. It should be definitively rejected on April 7.

But what about Gillson? Don’t we need to update some of its structures and roads? The answer is that we do. But we should think before we act. Here is an example: 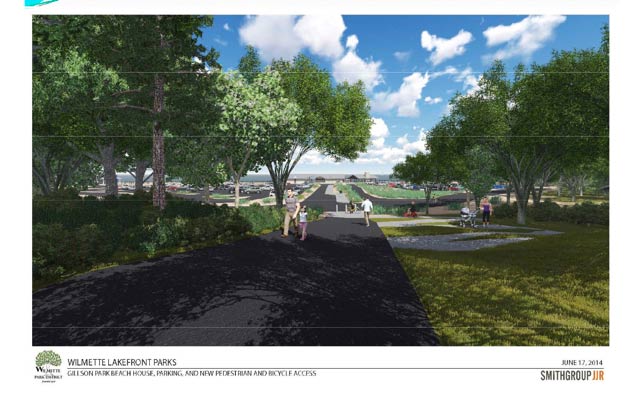 Above is the proposed new blacktopped central access corridor onto Gillson beach, cutting through the park and mature trees for a broad view of sky, some lake, with excellent sight lines to the — parking lot.

Is this what we want for our premier lakefront park? Is a blacktop road the most environmentally friendly way of getting pedestrians to the beach? Does it adequately protect green open spaces, or does it preference paving? Is this the best $1 million to consultants, and “six years of planning” by our park commissioners can accomplish? Can’t we do better?

Vote NO on the Park District referendums. The Langdon plan was never a good idea. It should have been scuttled after standing-room-only public meetings last November and December. Instead, Park District Commissioners forced this vote. The best parts of the Gillson plan are mediocre, expensive, overbuilt, with too much paving, and too little attention to landscape and open space. It should be sent back for a rework, a tighter budget, and some real community input.

Peter and Robin Baugher of Wilmette