Loyola Academy’s Anne Bloomer tallies a goal in the opening period of the state title game at the United Center. Photography by Jon Durr

Maggie Cusick, known for her speed and stick-to-itiveness, drew the tough assignment.

The Loyola Academy junior was given the dicey — and icy — task of “shadowing” Latin School’s Grace Zarzecki. Her job was to keep this jet on ice from taking off and wrecking a perfectly fine Sunday morning at the United Center.

“Not a glamorous job,” said Cusick, an all-state defenseman and three-year starter for the Ramblers. “But an important one.”

Cusick and her teammates pretty much held Z Force — Zarzecki — in check, but they ultimately came up just short in the 2015 Illinois State High School Championship on March 22. Latin (22-5-4) managed to withstand LA’s late flurry and walk away with a 4-3 victory.

“One more minute,” said LA junior Emma Wright, another all-stater. “If we had had one more minute, we might have been able to take it.”

The ending was … frenetically entertaining.

In the final 2:31 of the contest, Latin scored once, while Loyola scored twice on clean — and magical — goals by super sophomores Tess Dettling and Valerie Caldwell.

The tension never subsided. In fact, it heightened.

Latin goalie Lauren Bennett was bombarded by pucks from all directions until the final horn blasted. Three shots — taken by Cusick, Anne Bloomer and Caldwell — in the final 28 seconds just missed, including one at the doorstep.

“I was scared,” said a hurried Bennett, not breaking stride as she walked on her skates through the United Center tunnel on her way to the Latin locker room. “Very scared.”

Coming back all of the way would not have surprised Sedam.

“We’ve been in worse situations,” said the Loyola coach, who guided his team to a 20-6-5 record. “We were down 4-1 (to New Trier) in the Quad Header (in November) and came back and won. It would have been easy for us to give up after we got down 3-1. But we didn’t. Instead, we stepped up.

“And when I think back on this game, I will think back to how we played in the final five minutes,” Sedam added.

His mind also might race back to a strategic decision. In an effort to pull off the victory, LA pulled its goalie shortly after Dettling’s goal with 2:31 left in the third period cut the deficit to 3-2.

“It might’ve have looked like we did that a little early,” said Sedam. “But we wanted to sneak up on them a little.”

Cusick couldn’t do much about that gimme. But she did plenty to curtail the actions of Zarzecki, who was named 2015 Cammie Granato Girls High School Player of the Year.

“Going up against a tremendous player like her, I knew I had to be focused,” said Cusick. “I know her, and I know her game. She’s quick on her feet, and she’s got a great all-around game.

“I thought it was an honor that my coaches believe in me. That they believe I can stay with a player of her caliber,” she added.

Being a defensive stopper is nothing new for Cusick. In last year’s state championship — New Trier edged LA 3-2 in double overtime — her assignment was NT scoring sensation Ivy Dynek.

“Whatever I can do to help my team,” said Cusick.

The smart and speedy Zarzecki, who will skate next year for Harvard University, presents the opposition with a myriad set of problems. She possesses drone-like accuracy, which accounts for her 34 goals and four assists in 19 games played for the 21-5-3 Romans.

“Grace is an amazing player,” said Dettling. “It’s hard to put into words how amazing she is.”

Zarzecki was at her finest midway through the first period, when she cut a figure eight down the right side and smacked a laser past LA goalie Tianna Lavalle.

She later assisted the second of two goals by Latin’s other all-state selection, sophomore Kendra Nealey.

No doubt, shadowing Zarzecki placed an added burden on Cusick. She was tagged with two penalties.

“When you pressure the other team’s star, everybody knows it. The players, the refs, the crowd,” said Sedam. “And when you do it, you attract extra scrutiny. It doesn’t take much to get in the (penalty) box.”

“One was stupid. I had my stick above my knees,” she said. “The other one was on a collision. I was being aggressive. Usually, my penalties are being aggressive, not stupid.”

Notable: Penalties certainly were a factor. Loyola finished the game with six trips to the penalty box, compared to Latin’s three. The Romans’ second goal was scored on a power play. … The big stage at the United Center seems to bring the best out of Dettling, who loves to deliver centering passes. For the second year in a row, she scored a third-period goal in a state title game. Her goal last year, in a loss against New Trier, forced overtime. “I was definitely a little nervous (with the UC atmosphere). But it was a good nervous.” … On LA’s strong finish, Dettling credited the team’s three seniors: Courtney Cheevers, Nicole Matousek and Kathleen O’Connor. “We got a pep talk from our seniors before the third period. They talked about this being the last [14 minutes] of their high school careers. It got us excited, for sure.” Dettling’s third-period goal on Sunday was her 19th of the season to go along with 10 assists. … Caldwell finished the season with 38 goals and 17 assists … LA freshman Anne Bloomer scored the game’s first goal with 10:13 left in the first quarter. She ended the season with 16 goals and seven assists. By the way, her younger brother, John Bloomer, won the “Shoot the Puck” competition, which was held between periods two and three … LA finished 1-3-1 in its season series with Latin. … Seven Ramblers earned all-state honors: Bloomer, Caldwell, Cheevers, Cusick, Dettling, Lavalle and Wright. … Parting quote: “We’re a young team,” Sedam said at the United Center last weekend. “There’s no reason why we can’t get back here next year.” 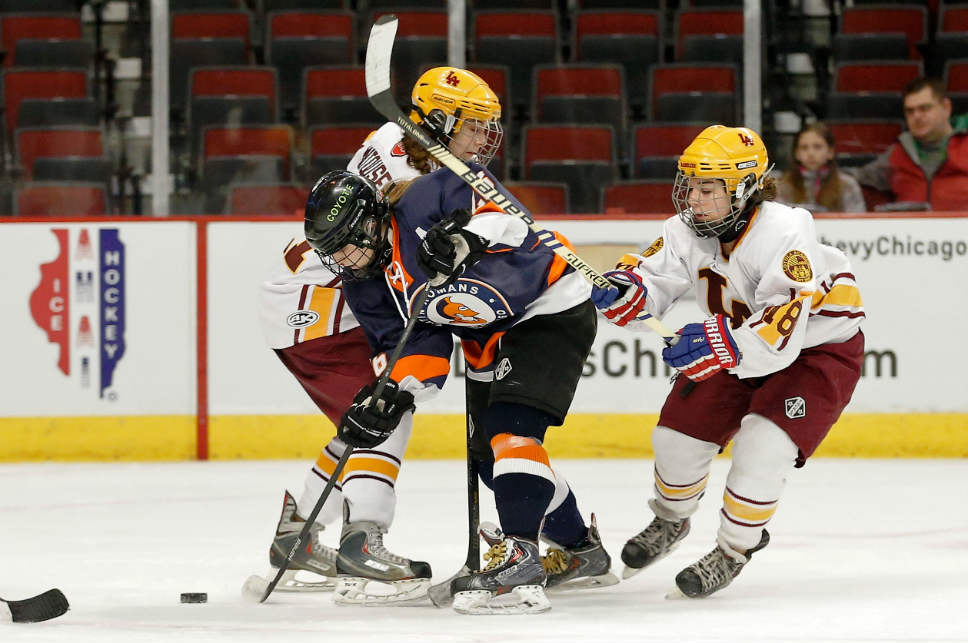 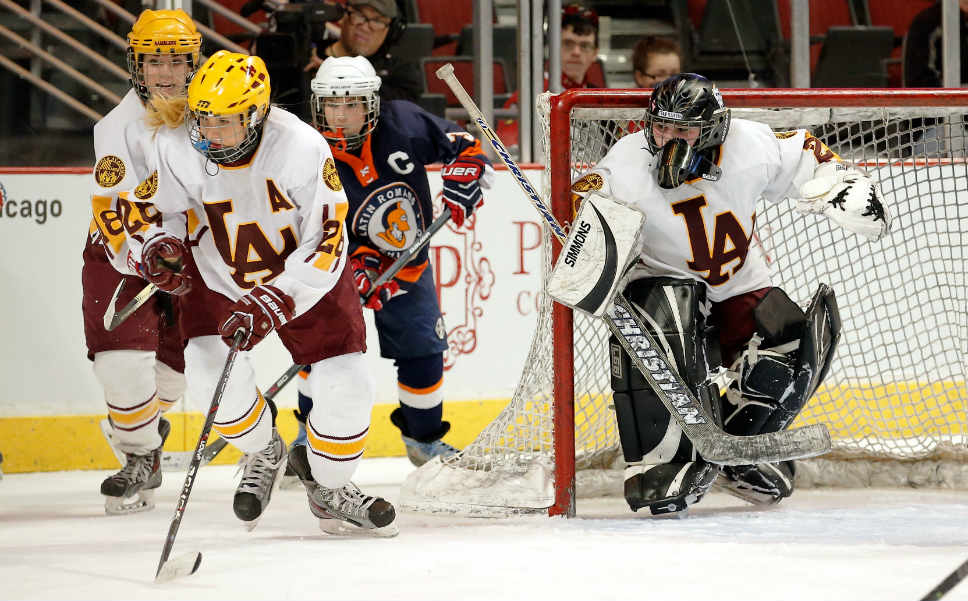 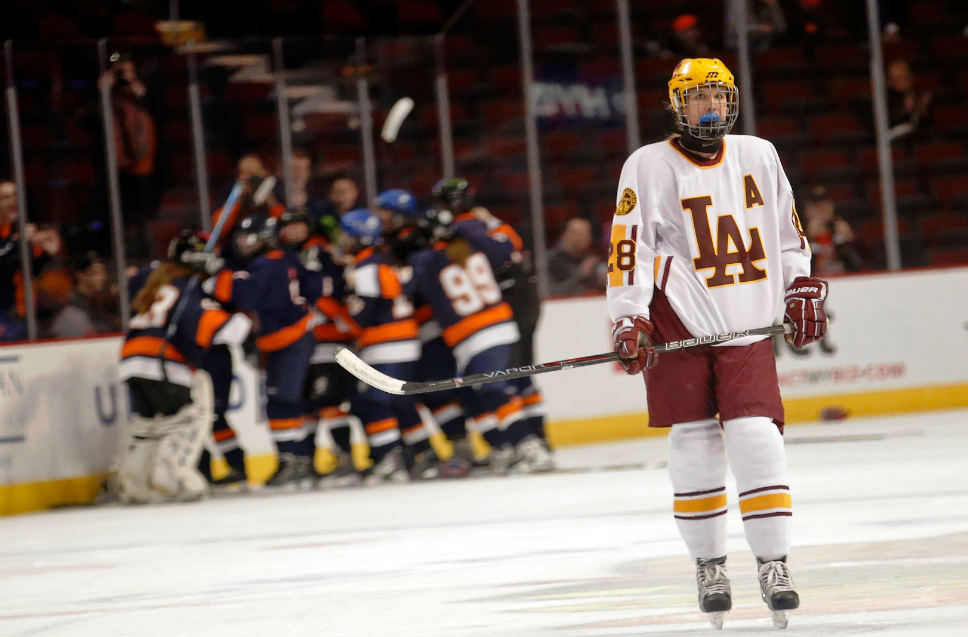 Emma Wright skates off the ice following her team’s loss to Latin. Photography by Jon Durr 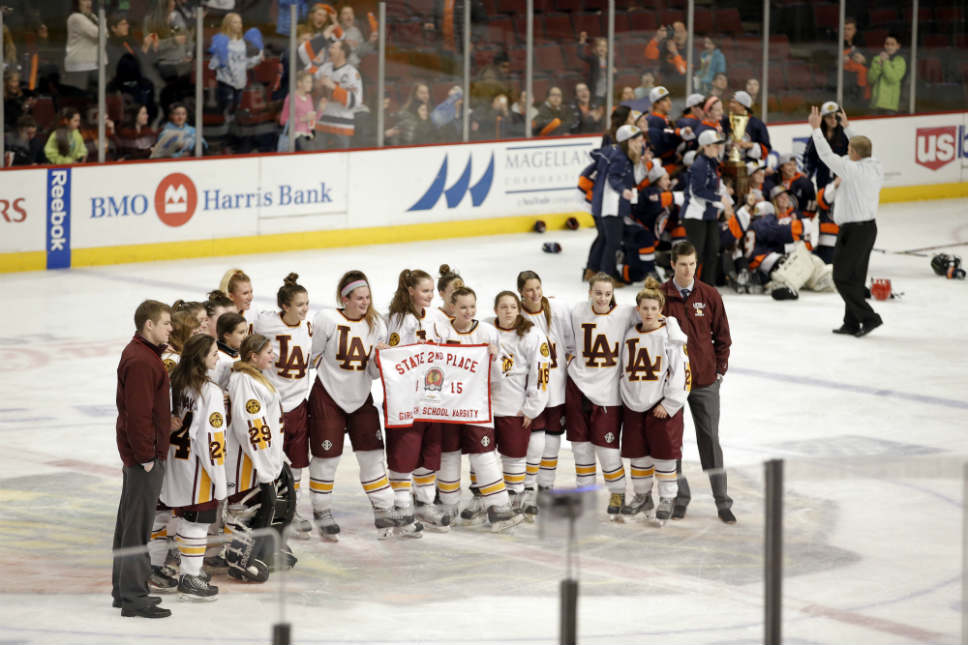 Both teams have their post-game pictures taken. Photography by Jon Durr