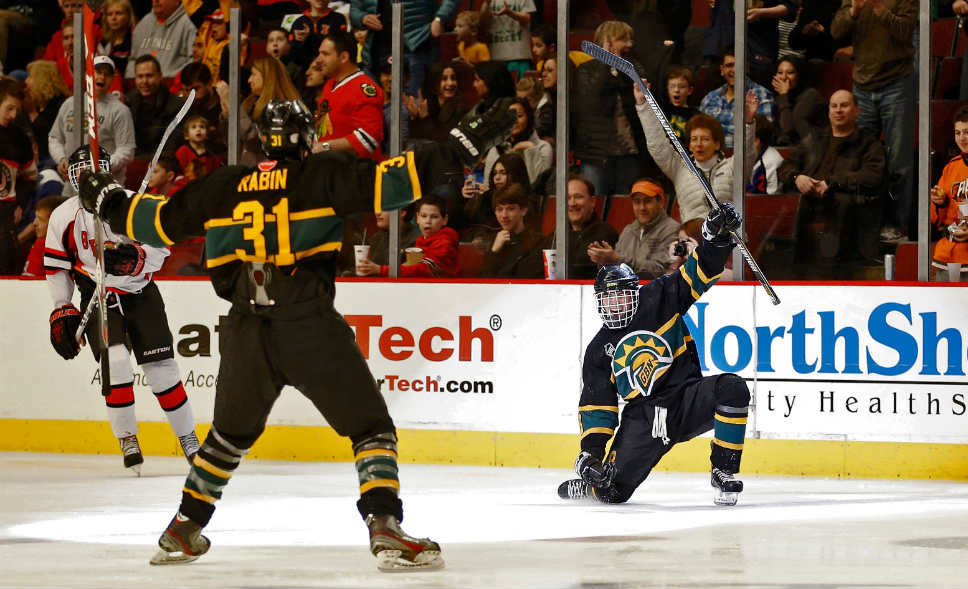 Glenbrook North’s Logan Nein celebrates a goal in the second period of the state title game against Benet Academy. Photography by Jon Durr

With a puck on his stick, Kyle Slovis raced toward one end of the ice rink at the United Center in Chicago. An excited, throbbing throng of Glenbrook North fans, clad in Spartans green and gold, cheered for the captain in the second period of the Illinois High School State Championship game.

The closer the senior defenseman got to Benet Academy’s all-state goaltender, Justin Davidson, the louder the throng got.

Amid the din on March 22, Slovis heard a voice behind him, a familiar voice. The voice screamed, “Drop! Drop! Drop!”

The scream came from the lungs of Slovis’ lifelong friend, Spartans senior forward Logan Nein. They were introduced to each other before each could walk, meaning their first “conversation” likely involved a pair of stares.

Slovis obeyed Nein at the United Center, back-tapping the puck before veering to the right of Davidson. Nein struck the well-timed drop pass past Davidson, upping Glenbrook North’s lead to 2-0.

“Logan,” Slovis recalled, “did all the work there.”

“I hit the ice as I was just about to start celebrating,” he said. “I had my cage [helmet] on.”

Nein and Slovis and the rest of the state champs wore rink-wide smiles in the hour that followed. The thrilling win — Benet’s Redwings had scored twice in a 2:14 span in the third period to force OT — halted a losing streak in state title games at two (both coming at the sticks of New Trier Green players, in 2013 and 2014) and increased Glenbrook North’s state championship haul to five, second all-time to New Trier Green’s 12.

“They had dedicated themselves to winning this since July,” Glenbrook North coach Evan Poulakidas said. “They had resolve all year, and their consistency … through the roof. We played 77 games (63-12-2), and they expected to win every one of them. They did not want to come off the ice.

Spartans senior goaltender Garrett Cohen, a backup last winter, did not allow a goal in last weekend’s championship until the 5:45 mark of the third period. Benet knotted it at 2-2 with 3:38 left in regulation. Benet (44-9-3) appeared fired up to extend its winning streak to 27 games. The surge could have deflated the Spartans’ outlook.

It did not. It did the opposite.

With just under a minute left in the 10-minute OT session, Day dimmed Benet’s collective mood with the biggest goal of his life. Day split Benet’s defensemen, gathered a sharp pass from senior forward Eric Doar and zinged a backhand shot over Davidson’s right shoulder. Game over. MVP honors to Day. Most of Glenbrook North players separated themselves from their sticks and helmets and gloves.

The gear rested on United Center ice, hockey’s celebratory litter. Ecstatic skaters negotiated around it as they acknowledged their joyous fans.

“Eric’s pass was incredible,” said Day, whose older brother, Indiana University freshman Nick Day, earned all-state honors as a Spartans forward last year and attended last weekend’s state final. “We have 18 seniors on our team. This was for the seniors, all of them. Amazing … what an amazing feeling this is.”

Spartans senior forward Alexander Merritt tallied his team-leading 57th goal, on an assist from senior forward Chris Zhang (53 goals, team-high 66 assists), to put his club up 1-0 in the fourth minute of the second period. Shortly thereafter, the Slovis-Nein show unfolded.

Glenbrook North’s 2-0 advantage seemed fairly comfy for the rest of the second period and a big chunk of the third. Cohen (29 saves) was a wall in pads. But Benet found life, found openings.

“We stood around and watched after we got the 2-0 lead,” Poulakidas said. “That put pressure on Cohen.”

Cohen had a week, a trying week. After starring in Glenbrook North’s 4-3 defeat of Notre Dame in a state semifinal in Bensenville on March 16, he traveled to Florida to attend the funeral for his grandmother (Joan). He did not return to practice until March 21, on the eve of the state championship.

“He’s a battler, a terrific athlete,” Poulakidas said. “When we were down 2-0 [against Notre Dame], he came up with two huge kick saves. We would have been down 4-0 without him. You have to give him a lot of credit for that win.”

Poulakidas first coached Cohen as a Northbrook Bluehawks youth coach. The coach knew he had a special puck stopper back then. The coach shared a prediction with his goaltender’s mother, Debbie, back then.

“I told her, ‘Your son is going to be a state champion one day,’ ” Poulakidas recalled last weekend.

Notable: Glenbrook senior forward Alex Crane slid the secondary assist on Nein’s goal in the state championship game. … Spartans junior forward Kyle Fisher scored twice in the 4-3 state semifinal defeat of Notre Dame on March 16. Senior defenseman Chad Yale provided two assists. Zhang, Nein and senior forward Tyler Mulier delivered the other assists. … Slovis (23 goals and 51 assists, in 74 games) was named the 2015 JJ O’Connor Boys Hockey Player of the Year and recognized for the honor, on the ice, between the first and second periods of the last weekend’s state championship game. Indiana University-bound Nein, on Slovis: “He’s the best player in the state, he’s got a 5.0 [GPA), he’s going to [the University of] Michigan, he’s captain of our team … he’s the perfect human being. You should see him play lacrosse.” … Poulakidas, on Slovis: “He has all the tools. He sees the ice like a center sees the ice.” … Zhang was named one of only six players to the 2015 Blackhawk Alumni All-Star team. … Poulakidas and Barrington coach Steve Martins earned Scholastic Hockey League Co-coach of the Year honors. … Slovis, Zhang, Merritt and Yale will suit up for Team Illinois at USA Hockey America’s Showcase in Pittsburgh April 9-13. … Glenbrook North went 2-0-1 vs. Benet during the regular season. 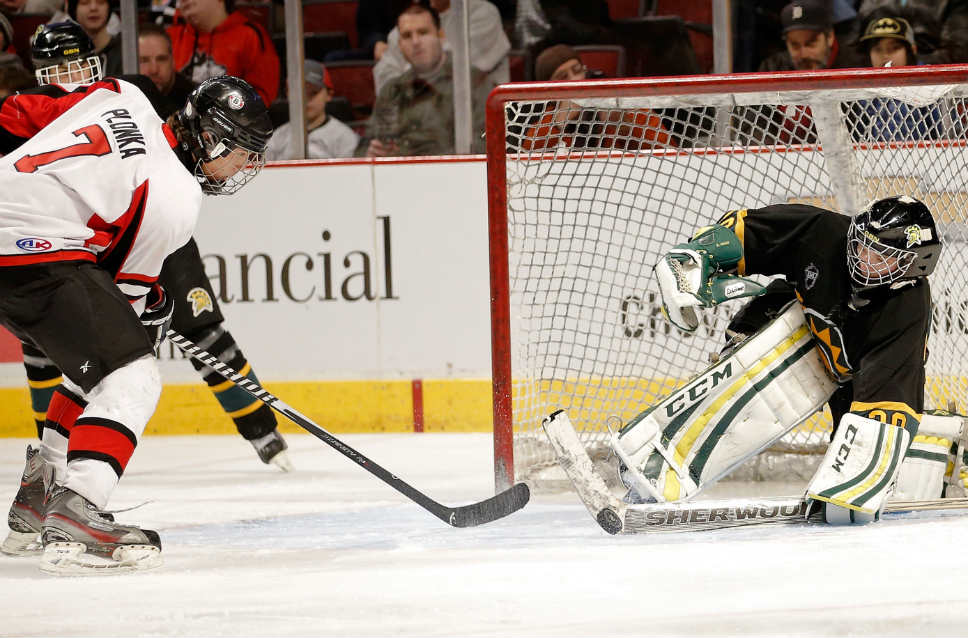 Garrett Cohen of Spartans make save against Benet Academy in the state final at the United Center. Photography by Jon Durr 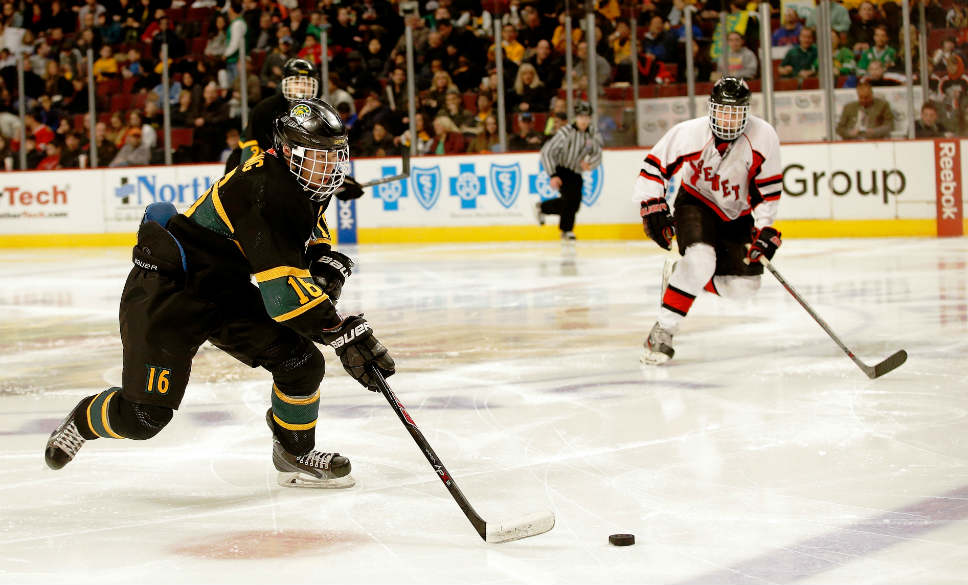 Chris Zhang of the Spartans pushes the puck toward the Benet goal during Sunday’s state championship. Photography by Jon Durr 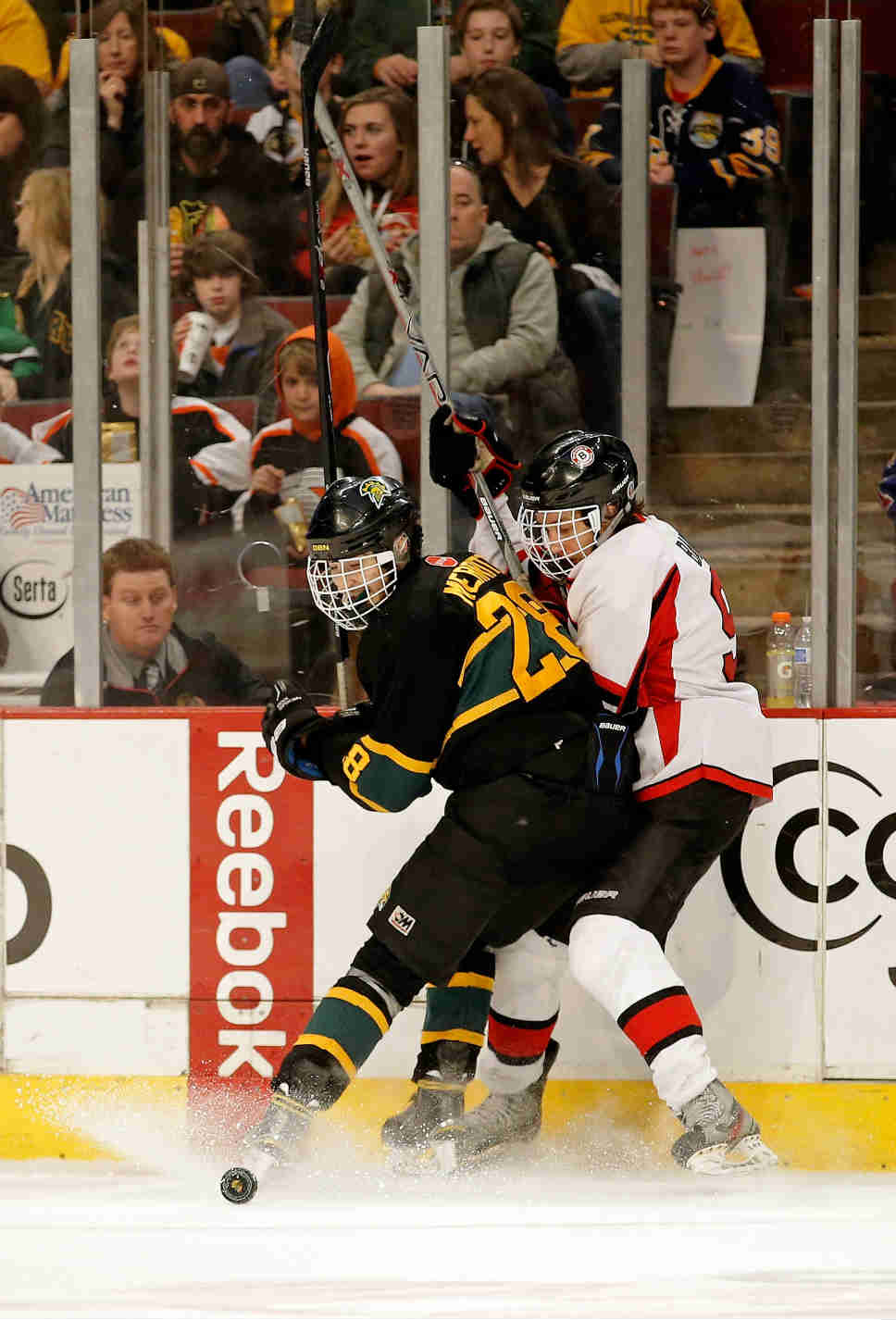 Alexander Merritt of GBN (No. 28) crashes into a Benet player during the state final. Photography by Jon Durr