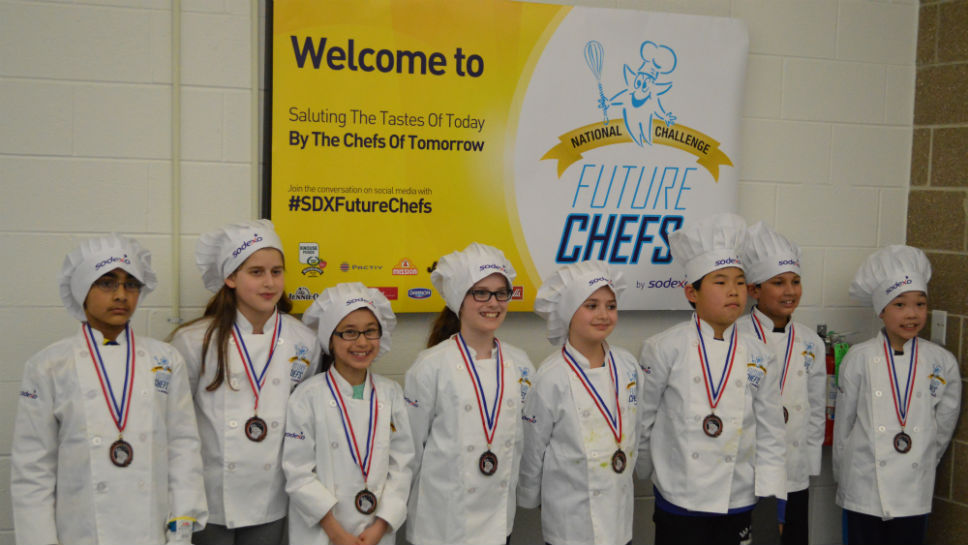 All of the Future Chefs finalists.

Maple School’s cafeteria was the site of a pretty impressive food fight this week as eight students from Northbrook/Glenview School District 30 had the chance to take part in a national culinary competition that asked them to use their creativity to create healthier after-school snacks.

It was part of the Future Chefs Challenge, sponsored by food service provider Sodexo, a company that has had strong ties with First Lady Michele Obama’s Partnership for a Healthier America and Let’s Move initiatives to end childhood obesity. This is the first year that District 30 participated though the challenge has existed since 2010. It brings together 2,500 elementary students in 29 states annually for a fun and educational program that has the spirit of popular cooking shows like “Top Chef” and “Chopped.”

Though entertaining, the challenge also has a greater importance according to Maple’s Food Service Manager (and Sodexo employee) Jeremy A. Higgins. “Serving kids healthy food is easier said then done,” he said. “They can be super picky until they start making food themselves and seeing the hard work that goes into it, which helps them appreciate it more. By allowing them to be hands-on like this, hopefully the idea will spread to other students and we’ll have even bigger turnouts in years to come.”

This year, nearly 40 children (mostly from the school district’s fourth and fifth grades) submitted a recipe, all of which were carefully looked at by Higgins. “It was difficult to choose,” he admitted, but ultimately he narrowed down the list based on impressiveness of the recipes, dedication to healthier ingredients and those that were allergen-free. On Wednesday all the finalists got a tour of Maple’s commercial-grade kitchen and got to use the facility to whip up their treats for the panel of three judges that included the school’s principal. 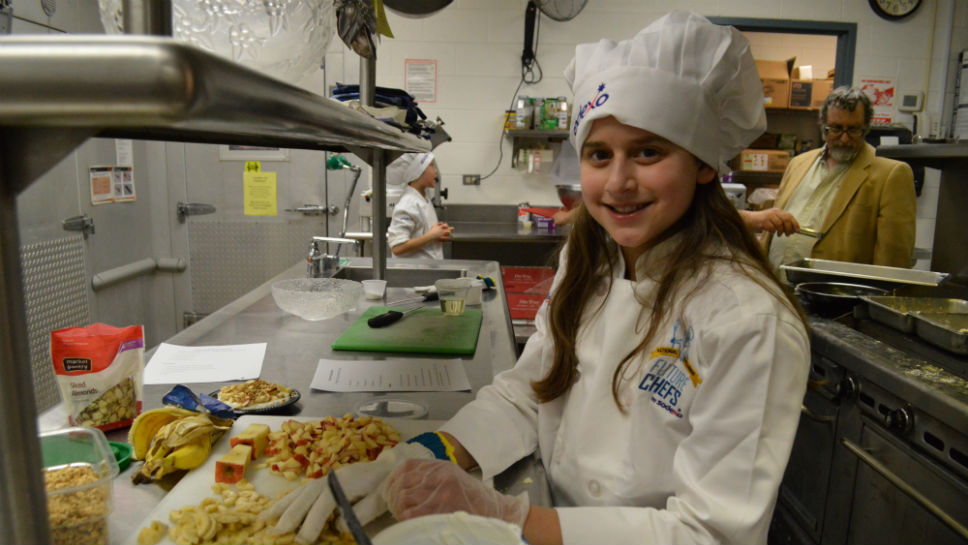 Among the finalists were Eleni Tryfonopoulos’ “Apple and Banana Crunch made with fruit, granola and yogurt and Rishi Purayil’s “Creamy Fruit Salad” with strawberries, grapes, apples, bananas and low-fat vanilla ice cream. Also on the sweet side was Rachel Buchanan’s “Sugar-free Banana Muffins” made with all-natural fruit juice as a sweetener. She took a runner-up spot, as did Genay Delotserkovsky for a creative guacamole recipe. Some of the students really got expressive in their dishes like Joshua Matthew whose “Glorified Cucumbers” topped the cut-up vegetable with a mix of honey, dried mint, feta and granola or Byung Jun Kang’s “Korean Fried Zucchini” specialty that dusted the plant with a mix of eggs, wheat flour and soybean oil. One of the audience favorites was Moses Chua’s “Healthy Meatballs” made with beef, pork, zucchini, oregano and garlic powder and accompanied by three different dipping sauces.

The grand winner, though, was Patricia Corasis’s “Go Green Smoothie” that blended pineapple, flax seed and spinach among other healthy ingredients. It was a recipe she and her mom saw on The Food Network and then modified to fit their tastes. “I drink it two times a day,” she said. The recipe best fit the judges’ criteria including originality, taste, ease of presentation, kid friendliness and use of healthy ingredients. 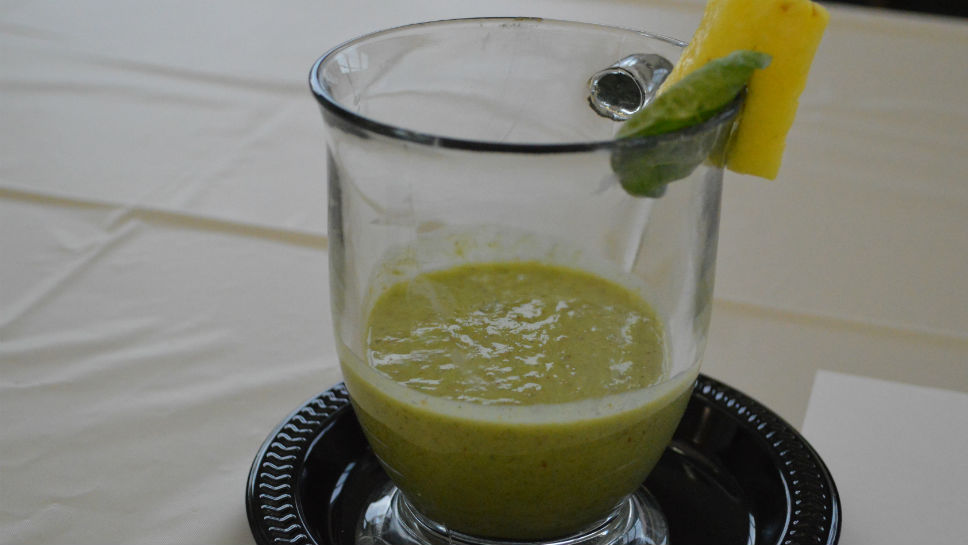 All participants went home with a certificate and goody basket full of utensils and a cookbook that Higgins hopes encourages them to “keep with it.” Corasis will also have her recipe on local school menus and will be considered for the regional finals. Five kids across the country will compete for the public’s vote on a special Future Chefs YouTube channel.

Based on audience reaction at Maple, the program was already a success. As fellow classmates passed amongst the tables to taste test the different recipes, more than a few could be heard asking, “Are we allowed to have seconds?”