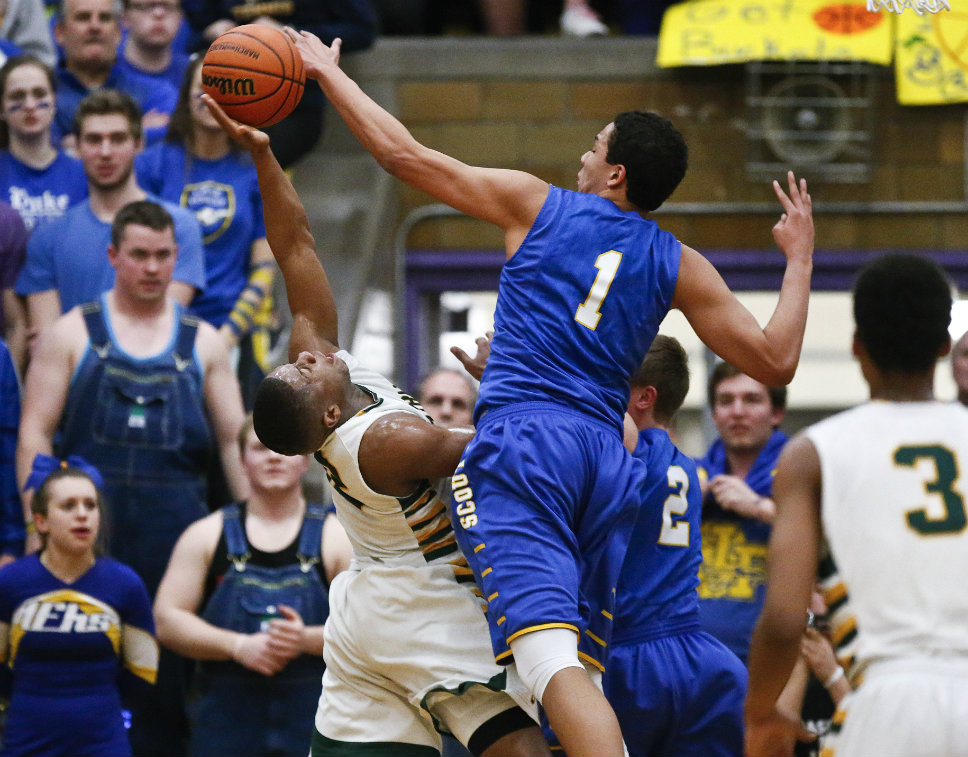 Phil LaScala wrapped his arms around Jake’s waist and picked him up, the son’s arms and legs flailing. The father put his son down gently. It was time to be a basketball coach again. It was time to answer questions about his team’s 57-49 loss to top-seeded Stevenson in the Class 4A Waukegan Sectional final on March 13.

He returned to the neutral position, ready to face an entirely different kind of challenge, no questions barred. The journalists surrounding him did not wear singlets.

“Our locker room right now … it’s tough in there,” LaScala said. “Our guys were invested in this, really invested. Great kids. Just the way they competed … not one guy on our team thought we weren’t going to win.”

His second-seeded Scouts trailed 40-27 after three quarters and 45-31 at 5:12 of the fourth quarter. It appeared bleak for the Scouts, who had lost only twice during the regular season, both setbacks coming against Stevenson’s Patriots (27-3). Lake Forest senior guard-forward Steve Vogrich nailed a trey. His classmate, 6-foot-8, 220-pound Evan Boudreaux, struck for the Scouts’ next 10 points — nine from three-point hardwood.

The flurry cut Stevenson’s lead to 50-45, with 1:39 left. It was the Lake Forest fans’ turn to convulse the packed gym.

Bleak turned into upbeat, in no time.

“The thing about this group, whatever the situation or whatever the environment, it always competed as hard as it could,” Scouts senior point Jack Traynor said afterward. “We had the ability to go on runs against anybody.”

“Great team,” LaScala said of his team. “The guys loved each other, loved competing. They had a lot of fun together. They knew how to keep things loose in practice.

“I was proud of the way this team came back [in the fourth quarter]. The way our guys executed at the end … that was one of my favorite moments this season. This team showed a ton of composure. I learned a ton from this team.”

Students of the game must have marveled at Boudreaux’s 30-point, 20-rebound performance in his final night in a LFHS hoops outfit. The Dartmouth College recruit tallied 15 of his team’s 22 points in the fourth quarter, after grabbing eight of his team’s 11 rebounds in the third quarter. The second of his two dunks in the second half — a rapid, net-fraying act at 6:53 of the fourth quarter — was ardent and resplendent and violent.

“He was focused. He’s got something a lot of kids don’t have,” LaScala said of Boudreaux, the program’s all-time leading scorer (2,077 career points) and rebounder (1,296 career boards). “He plays like that in practice every single day.”

He declined to speak to journalists afterward. Boudreaux apologized for the decision.

Traynor spoke. Traynor (7 rebounds, 4 assists) praised the big man and the rest of the team.

“That’s the kind of player [Boudreaux] is, what he did in the fourth quarter,” the guard said. “He is the best to ever play for this program. How he played tonight … we expected that from him.

“Great group of guys,” he added. “We had great times together, great chemistry.”

Scouts junior forward Lorenzo Edwards, a burgeoning force, finished with 14 points, six rebounds, four assists and three blocks. He shot 7-for-10 from the field. His put-back bucket, at 1:25 of the fourth quarter, pared the Pats’ lead to 52-47.

It turned out to be the Scouts’ final field goal of the season.

“Our guys showed tremendous will as they came back in the fourth quarter,” LaScala said. “They never gave up. I appreciated that.”

Stevenson senior guard Jalen Brunson — the only player from Illinois to be named a McDonald’s All-American — scored 25 points. He made only one field goal in the second half, but it was a big one, a dramatic one. Brunson launched an off-balance three-pointer as time neared 0:00 in the third quarter. The ball went in as he fell backward near a sideline, not far from where his father, former NBA player Rick Brunson, was sitting.

The son then hit all eight of his free-throw attempts in the final quarter. 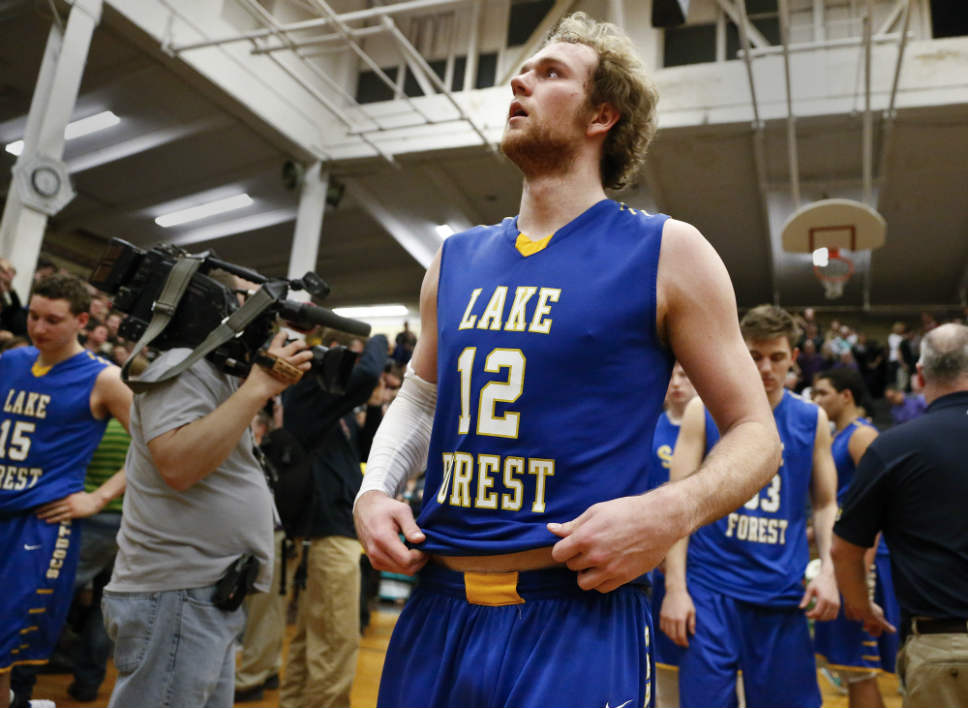 Evan Boudreaux of the Scouts walks off the court at the end of the sectional final. He had 30 points and 20 rebounds. Photography by Joel Lerner