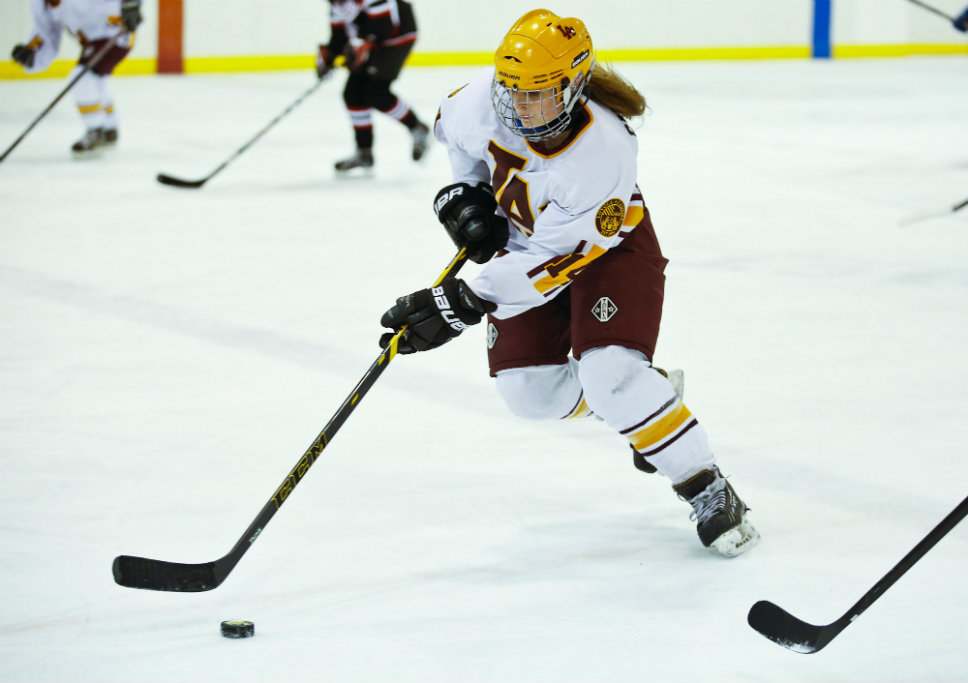 Loyola’s Valerie Caldwell handles the puck during state quarterfinal win over Maine. She has 37 goals and 17 assists heading into Sunday’s state championship game at the United Center. Photography by Joel Lerner

Valerie Caldwell sits in a lobby area of Centennial Ice Rink in Wilmette. Somebody reminds the Loyola Academy sophomore forward of her selection as one of only six female hockey players to be named to the 2015 Chicago Blackhawk Alumni Association All-Star Team.

Caldwell shifts her 5-foot-7 frame, covers her cheeks with both hands and triples the size of her eyes. The Glenview resident shifts again. She beams, revealing a mouthful of braces that might come off any day — either because she smiles hard at least 512 times a day or because her teeth appear super straight under the metal.

“That was the coolest thing!” Caldwell shouts. “I sat next to [Blackhawks defenseman] Brent Seabrook at the banquet. Brent Seabrook! Can you believe that? I told him I watched a game he played against Detroit. I told him I sat near the glass. He’s so fast, so good.”

Seabrook — yes, Seabrook! — would have been impressed had he watched Caldwell play in LA’s 8-2 defeat of Maine in an Amateur Hockey Association Illinois (AHAI) Blackhawk Cup state quarterfinal at Centennial Ice Rink on March 12. Forget her two goals and three assists. Caldwell negotiated her way around the ice swiftly and effortlessly and smoothly. She looked frighteningly efficient, too good for the competition, cool … veteran cool. Do people learn to skate before they learn to walk? If so, Caldwell is one of those people. Must be one of those people.

“She’s strong, with a very good shot,” says LA coach Conor Sedam, whose 17-4-5 club, the reigning state runner-up, was scheduled to face Lake Forest in a state semifinal at Edge East in Bensenville on March 17. “Valerie’s combination of knowing when to keep the puck and when to pass the puck … that part of her game, that combination, has improved this year.”

Before celebrating her fifth birthday, Caldwell spent two years learning how to figure skate. Something was missing, though. Taller, older people skated with sticks and moved pucks. She watched. She wondered. Her question to herself and to others within earshot (or the bulk of Illinois’ population) was, “Why can’t I play hockey?”

She got to play hockey, well before mastering the multiplication tables. She fell for hockey. Hard. Clean-check-into-the-boards hard. Her first stick was a pink wooden one.

“I was ready to play, so ready,” Caldwell recalls. “Ready to take on boys.”

Caldwell glided and scored for Glenview Stars teams, helping a U12 team capture a national championship. One of her Stars teammates was Tess Dettling, a darting forward from Wilmette. Dettling is a sophomore forward for Loyola Academy these days. Dettling scored the game-tying goal, late in the third period, of last year’s state championship at the United Center. Dettling soared to celebrate the big goal against New Trier.

She came down and settled into the reliable arms of forward-turned-outfielder-on-skates Caldwell.

“Valerie is outgoing, definitely outgoing, on and off the ice,” Dettling says. “She has upped her game overall. Her speed, the way she uses her body, her goal-scoring ability … she’s very good.

“Her personality,” she adds, “is unique, different. She’s pretty funny.”

Think of the most gregarious person you know. Now multiple the energy of that person by 10, and you will have a pretty good idea of what it is like to be around Caldwell, the youngest of Craig and Janet Caldwell’s four children. Some people seize days. Valerie Caldwell squeezes the daylights out of days and usually doesn’t let go of them until she falls asleep.

“I’m enthusiastic. I’m loud,” Caldwell says. “I’m talkative. I like letting people know I’m around. You should see me in classrooms. You should hear me in classrooms. When I see a teacher in the morning, I immediately shout, ‘Good morning!’ It’s a great life, being a student at Loyola Academy, being a hockey player. I’ve had great opportunities and great support from my parents.”

“She is always happy to be at a rink,” Sedam says. “A rink is her favorite place. I remember a Saturday night game this season, at Upper Fox Valley. There’s Valerie, raising and pumping her arms to get the crowd going. She has the most energy of any player I’ve ever coached. She can change the demeanor of the whole team, for the better, on the ice or on the bench just by being herself.

“It’s impossible,” he adds, “to not be in a good mood when you’re around her.”