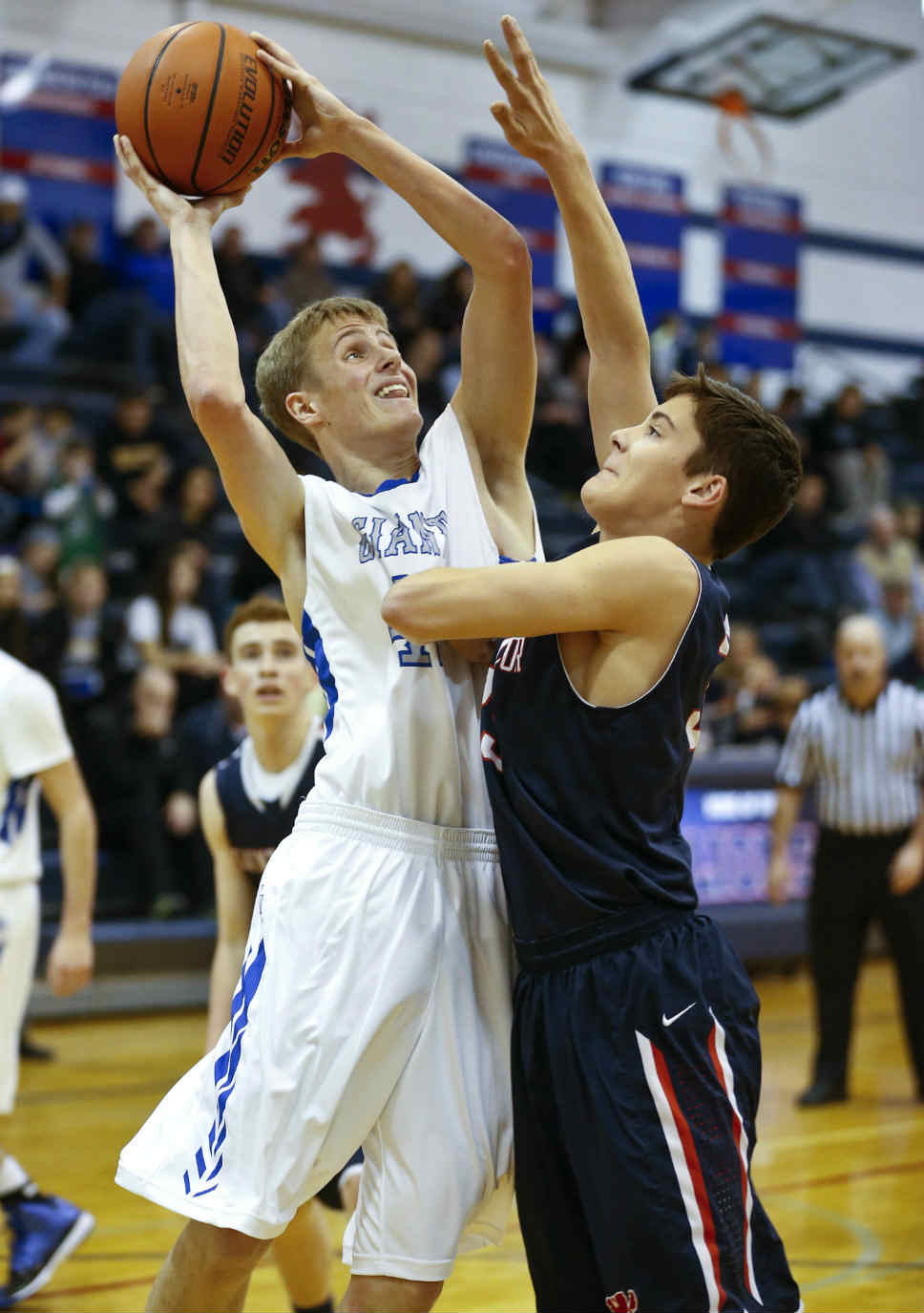 Hallvard Lundevall made a touchdown catch this past fall that retired football coach Hal Chiodo still is unable to get out of his mind.

And he hopes it never does.

The leaping grab is stuck in the deep recesses of Chiodo’s brain.

“I often replay it in my mind,” said Chiodo. “I hate to think where we would have been without it.”

Lundevall’s spectacular catch in Week Nine helped the Giants beat Glenbrook North and finish the regular season with a 9-0 record.

Now, jump ahead to March — with all of its madness.

In a Class 4A sectional semifinal game at Mundelein High School, Lundevall was put on the spot.

With 11.8 seconds left in the game, and HP holding a one-point lead against New Trier, the 6-foot-3, 175-pound senior stepped to the foul line and calmly hit both ends of a one-and-one.

Like that TD grab in the GBN end zone, the moment wasn’t too big for Lundevall.

“I was happy to be there,” he said. “I went to the line with a lot of confidence. I wasn’t going to let the pressure of the moment control my emotions. I just went through my routine: take a deep breath, imagine the ball going in and shooting it.

His two free throws sealed a 44-41 victory and secured a 20-win season.

“Hallvard hasn’t been in that situation a lot — only a few times in his career,” said HP head coach Paul Harris.

“Guys need to be special in a situation like that,” the coach added. “And Hallvard was.”

Lundevall’s value to a team — football and basketball — is unquestioned. The same goes for his freakish athletic ability.

It’s just been a little difficult, at times, for him to climb out of the shadows.

Accolades — all-league honors — have eluded him in both sports and gone to other worthy teammates.

But don’t feel bad for this kid with the infectious smile and positive outlook. He’s been an important piece for two 20-win varsity basketball teams and two state-playoff football teams.

Besides, his time in the limelight might be … around the corner.

It’s “not set in stone” — just yet — but it’s likely that Lundevall, who will turn 18 on May 28, will enroll at a top prep school out East: Phillips Academy in Andover, Massachusetts.

The route worked wonders for his older brother, Tellef Lundevall. After attending Phillips Exeter Academy — which, by the way, is Phillips Academy’s archrival — for a year and playing two sports (football and basketball), Tellef went on to Brown University and became a standout wide receiver. He is now playing professional basketball in Norway.

“Prep school made a big difference for his brother,” said HP’s Luke Norcia. “And I think it would pay off for Hallvard, too. It’s an opportunity that he could take advantage of.”

Chiodo describes Lundevall as a “classic late bloomer’ and a carbon copy of his older brother.

“Hallvard is an extremely tough kid mentally,” Chiodo said. “But physically, he still needs to fill out quite a bit. I didn’t coach Tellef, but guys at school tell me that Tellef was physically very similar to Hallvard .

“And when I look at Hallvard, I just see a kid getting better and better,” Chiodo added. “He was one of the our leaders of the pack. He was a big part of our backbone. And he clearly was an all-conference receiver for us. But he got caught in the numbers game (nine Giants made all-conference). I feel the same way about (defensive end) Jason Shulruff.”

The trio of Lundevall, Norcia and Jack McGuire — known as the “Hands Squad” — was highly productive. And entertaining.

Lundevall, who missed three games due to injury, was targeted 30 times and came down with 17 catches for 293 yards and five touchdowns. He averaged 17.1 yards per catch.

“Usually, a high school football team might have one really good wide receiver to go along with some average ones,” said Chiodo. “We had three guys with unique abilities. Luke was a jack-of-all-trades kind of guy. McGuire was your classic receiver with great hands. And Hallvard was a big receiver who could go up and make plays.”

Lundevall also lined up on the defensive side of the ball, as a DB. He was a two-year starter with three career interceptions.

“What I like about Hallvard is that he always brings the positive energy,” said Norcia. “He never thinks we’ll lose a game. He always fights until the very end.”

Being the team’s chairman of the boards was important to the high-flying Lundevall.

“I take a lot of pride in rebounding,” he said. “My brother told me how important rebounds are. College coaches love to see you rebound. It’s all about desire. I always think of (Mundelein High School grad) Ben Brust and how he rebounded at Wisconsin. He was crazy on the boards.”

Tellef Lundevall, who is averaging 12.7 points and 8.2 rebounds for his team in Norway (Baerum Basket), might be pretty far away right now (a 12-hour flight), but his influence on Hallvard remains far-reaching.

“Tellef taught me to never be satisfied (as an athlete). Continue your athletic career and keep wanting more,” said Lundevall.

“Playing pro basketball is another example of him not giving up and wanting to continue. That has helped me to be passionate about athletics.”

His dad, Torjus, also is very much into sports. He played basketball for the Junior National Team in Norway.

“My dad taught me a lot of about being a competitor,” he said. “He talks a lot about showing poise and being calm under pressure.”