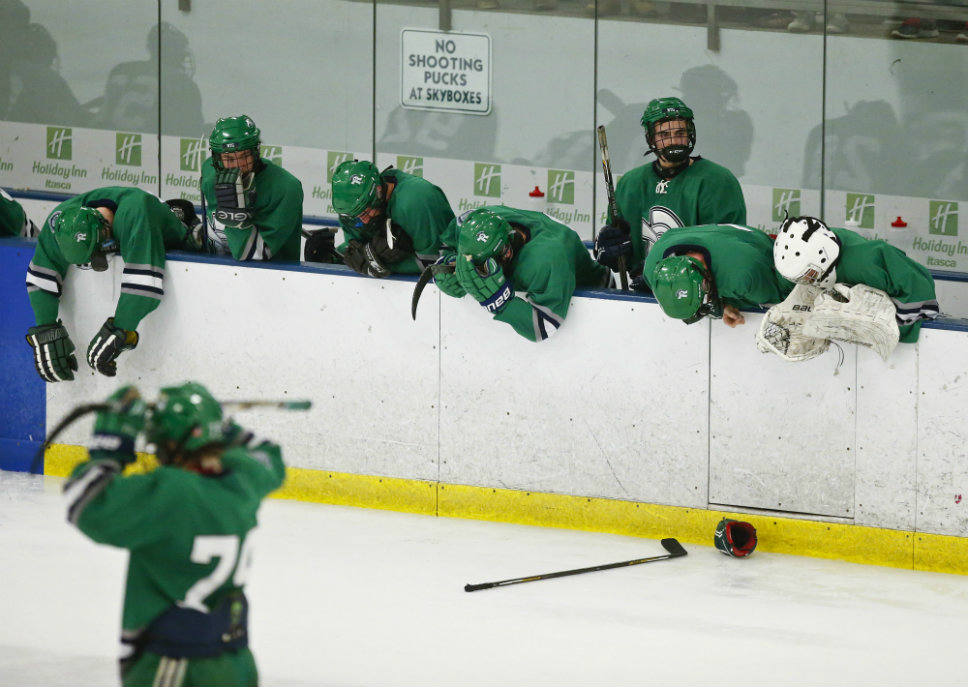 Members of the New Trier Green boys hockey team are in shock after losing 2-1 to Benet Academy in the state semifinal. Photography by Joel Lerner

Some boys fell to the ice as soon as it was over. Their knees hit the surface first, followed by their gloved hands. They stayed there, heads bowed, for several minutes, green-clad athletes feeling blue.

NT Green took 40 shots to Benet’s 22. Green senior defenseman Sam Weinstein took the first shot of the game, 17 seconds in, as the champs came out flying, Indy cars on skates to Benet’s go-karts on skates.

Benet goaltender Justin Davidson (39 saves) withstood the barrage, making stop after stop after stop. He blanked Green in the first and third periods. New Trier knotted the semi at 1-1 when senior forward Harry Jones solved Davidson with 5:05 left in the second period. The shot traveled between seven and eight feet. Senior forward Ryan Petterson provided the assist, sliding a pretty centering pass after some relentless forechecking.

“We finally got it in close, in tight,” NT Green coach Bob Melton said. “Harry then got the shot up high.

“We had a lot more scoring chances than they had. You have to be able to score more than one goal with the number of shots we took. Their goalie played great. Our goalie [senior Jack Junge, 20 saves] played great.”

Forward Robert Ernsting scored both Benet goals, the first coming at the 15:15 mark of the second period. Only 4:04 was left in regulation when he netted the clincher, on a rebound following a shot by Mitchell Plonka. Green senior forward Brent Segvich took a vicious slap shot shortly thereafter. Benet then went 0-for-2 against an empty net.

A desperate NT Green squad (51-11-1) kept the heat on in the final 30 seconds. Senior defenseman Graham Soman sent a scorcher toward Davidson with about two ticks left. Davidson stopped the high, hard shot to secure a berth for Benet in this weekend’s state final against Glenbrook North at the United Center.

“One goal short,” Melton said. “We were on the other side of that [vs. Providence] in a semifinal last year. Our team had a very good season. I’m happy for the boys.”

NT Green had dealt with lofty expectations all season. It was shooting for a third straight state championship and 13th overall. Its roster featured seniors, only seniors. Twenty-two, to be exact. Teams could not wait to battle Illinois hockey’s perennial power, Illinois hockey’s New England Patriots.

“There was pressure to keep [the string of state titles] going,” Melton admitted.

But it was the good kind of pressure. NT Green players welcomed it, thrived under it, enjoyed it.

They then ran into a hot goalie. The hardest thing to face in hockey playoff games is a hot goalie. Ask any coach, any player. Davidson was on fire on March 16, a five-alarm job in pads and a helmet.

“You get 40 shots in a game … you have to score more than we did,” Petterson said. “We dominated. We didn’t score enough. Their goalie was amazing.”

A distraught Petterson, like his teammates, had a hard time accepting Green’s playoff run had ended one win short of another game at the United Center. He stood in a hallway, a few feet from his team’s locker room following the state semifinal loss. He was still dressed in his green uniform, a day before St. Patrick’s Day.

“How close we were,” Petterson said of what will be one of his fondest memories of the 2014-15 season. “We were friends at practices. We were friends after practices, hanging out and doing things together.”