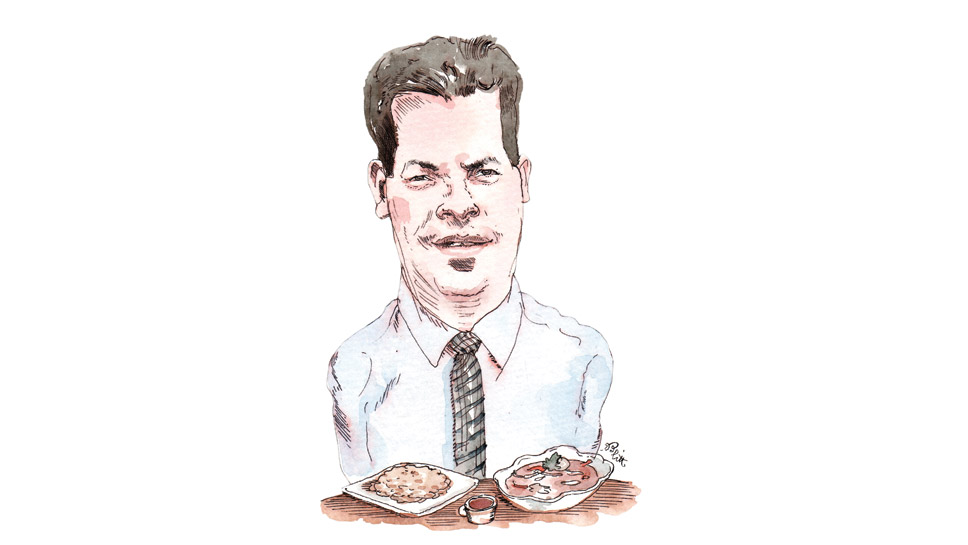 I’m sitting down to eat with Lior Lavy at Market House on the Square in Lake Forest, and the hostess places us a dropped napkin away from the hearth. As the fire flickers beside us, the décor — hanging lanterns, black-and-white photos of polo players, paintings of hunting dogs, and a map of Paris — provides a feeling akin to sitting in a hunting lodge designed by Ernest Hemingway.

Written on the lunch specials rests this quote: “More important than food pairing is the person with whom you drink the wine.” Attributed to Christian Moueix, the French vintner, it’s hard to imagine Papa not wholeheartedly agreeing with the truthfulness in that notion. And even though Lavy and I stick to water and a shot of espresso for lunch, the quotation certainly applies even now.

The noon siren roars from City Hall a block away.

“This is interesting,” says Lavy, contemplating the noise. “This is a sound I’m used to hearing in Israel, not here.”

The noise trails off, and the server takes our order. Lavy chooses the mushroom risotto and the soup of the day, which happens to be chicken tortilla. Since moving to the United States a year and a half ago, the chief operating officer of Artizone has had to adjust to more than just a siren announcing the time — instead of alerting the general populace to a potential missile strike. Lunch has taken some getting used to as well.

“If there is one big difference between Israel and the U.S., it is in the U.S, lunch equals sandwiches,” says Lavy, who admits “I can’t eat too much bread.” But even though he may not eat them, sandwiches, to some extent, are what brought Lavy here.

One of five Israeli co-founders of Artizone, Lavy, a Highland Park resident, oversees the operations of the startup, an online food delivery service that specializes in connecting local artisans — such as butchers, confectioners, cheese mongers, and yes, even bread bakers — to metropolitan and suburban customers.

After his mandatory conscription in the Israel Defense Force (IDF), Lavy, who was part of a special IDF intelligence corps, studied computer sciences and mathematics at Tel Aviv University. Even at a young age, he taught his peers computer programming in high school.

Lavy was born and raised south of Tel Aviv in the city of Rishon LeZion. A longstanding target of the terrorist organization Hamas, Rishon LeZion has endured countless bombings and long-range rockets.

The groundwork for Artizone was laid when Lavy met Alex Zeltcer while both were working at the telecommunications firm Comverse. Though they would leave at around the same time to pursue different career paths, they eventually would work together at the Israeli branch of Dassault Systemes, the French software company specializing in the production of 3D design software.

In 2009, together with three other partners, they started Artizone. At first, the founders weighed in on which industry to pursue, batting around ideas — kids clothing being one — until they hit on the idea of one artisan in particular: a jam maker.

“All five of us started to talk about this jam-making lady more than anything else,” notes Lavy. “What would she need? How would we help her? And we started to talk more about food.”

Food had always been a shared passion between Lavy and Zeltcer, who continued to stockpile the best utensils and ingredients for use in the kitchen, as well as flying to countries on business trips for days at a time and enjoying the best meals they could find in their roles as sales rep and manager.

In 2011, Artisan launched its website, creating the first Artizone community with five local artisans in Dallas.

“And just before we went live, believe it or not, a jam-making lady sends me an email saying, ‘I heard about your service, what do I need to do to join?’” notes Lavy. “I couldn’t say no.”

Over the past year, online grocery shopping has increased by more than 22 percent. The industry has the potential to grow exponentially over the next four years to $100 billion. To understand how shocking that is, one must take a walk through the graveyard of failed startups. It’s there that the bones of Webvan lie belly up.

Since the dotcom crash, leaner, more streamlined businesses are reviving the online grocery marketplace. Even big players like Amazon and Wal-Mart are competing (with AmazonFresh and Wal-Mart Grocery).

Lavy believes they can carve out their own space in this emerging market, and to do so effectively, they have learned from their predecessor’s mistakes and avoided warehouses altogether. In the process, Artizone has overcome the logistics challenge of efficiently delivering perishable goods to the consumer from a myriad of individual, niche, mom-and-pop stores.

Touting itself as a technology solution that brings the “farmer’s market to consumer’s doorsteps,” Artizone.com has since expanded from Dallas to include Chicagoland’s DuPage, Lake, and Cook counties. Counting Gepperth’s Meat Market, Hendrickx Belgian Bread Crafter, and Hagen’s Fish Market as only a smattering of its 104 artisans —and growing — in the Chicago area alone.

When you boil it down, Artizone’s business model is all about “connecting small shops and businesses to consumers who care a little bit more about the food that they eat,” says Lavy, adding: “it’s all a question of density. If your delivery truck can make 10 drops in two hours it makes sense. If it can’t, then it doesn’t.”