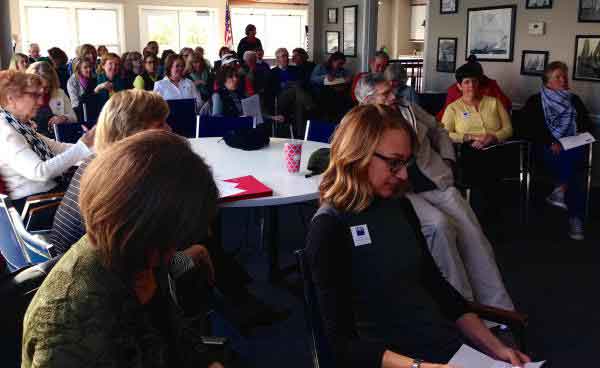 Attendees at the League of Women Voters-Wilmette meeting about the lakefront plans; photo from the League’s website.

The Wilmette League of Women Voters decided to support both Wilmette Park District lakefront bond referendums, after a lengthy presentation and heated discussion at its meeting on March 13. Seventy-five people attended the public portion of the League’s meeting to learn more about the two bond referendums and 26 League members attended the consensus meeting.

According to Lali Watt who sits on the League Board and was on the lakefront study committee, six committee members began studying this issue in earnest back in January when the Park District first decided to go to referendum on this issue. The League required all six study committee members to have no position on the lakefront referendums. The committee drafted a series of questions they felt the community would want answers to and then began the laborious process of gathering information.

The study committee reviewed 23 documents, some of which included ADA assessments, lakefront committee reports, financials, renderings and submissions from community groups. Members met with the Park District Board and asked them a series of questions that required written answers. They also met with two community groups: Wilmette Lakefront Friends which supports the referendum and Save Wilmette Beaches which is in opposition. According to Watt, study committee members spent many hours checking facts to ensure accuracy.

“[The community] can feel confident that the facts we put out there are real facts,” Watt said. “The League’s goal is to have informed voters.”

The final result was a 55-page presentation that was shown to the membership and public on March 13. After the presentation, the League held a private consensus meeting where 26 League members discussed the issues at hand over a two-hour time period.

At the consensus meeting, the membership considered a series of questions for each of the referendums looking at whether the Park District’s plans for Gillson and Langdon addressed: