This Letter to the Editor was submitted by the Women’s Republican Club of Lake Forest-Lake Bluff. Letters to the Editor represent the writers’ opinions and not necessarily those of Daily North Shore.

The Women’s Republican Club of Lake Forest writes a Letter to the Editor: In an email released to parents March 16, 2015, on the eve of three days of resumed and controversial PARCC testing, Lake Forest High School Superintendent Michael Simeck asked parents to refrain from “opting out” of PARCC testing– testing that is based on the controversial Common Core State Standards implemented at Lake Forest High School. His concern echoes those of many administrators across the country alarmed at the number of parents “opting” their children out of testing and students simply staging walk-outs to oppose PARCC testing.

Simeck stated LFHS was “well below the 95% [PARCC testing] participation mark, and students’ failure to participate in the PARCC exams will result in the district automatically failing to meet accountability obligations.” He noted students’ opting out of the PARCC test for the remaining three days in March and later, for several days in May, could “cost the District substantial federal funding dollars that may have a direct impact on programming at LFHS”. He did not specify a dollar amount or the programs implicated.

In a tone some parents found condescending, Simeck urged parents to express their concerns about PARCC “in a way that creates no potential harm to all our students grades 9 – 12”, implying parents standing on principle or those with grave practical concerns over PARCC testing constituted any meaningful “harm” to students. He did correctly refrain from confirming a false rumor that “opting out” of testing was illegal: indeed, no law in Illinois forces any high school child to take a standardized test. He added: “Your local or state legislators are responsible for PARCC testing in Illinois,” but stopped short of urging Lake Forest & Lake Bluff parents to contact their local state legislators or Governor Rauner—logical first steps in fighting Common Core, PARCC and the federal “womb to tomb” student data collection and storage

A few days earlier, on Saturday March 14, 2015, the Women’s Republican Club of Lake Forest-Lake Bluff hosted a debate on Common Core, PARCC testing and the federal government’s collection, storage and dissemination of student data. Over seventy people attended the two –hour event, peppering the debaters with questions that clearly indicated a high level of sophistication and concern. Several parents and educators from Lake Forest, Lake Bluff and surrounding suburbs remarked that Common Core State Standards have “dumbed down” their school’s curriculum, is age-inappropriate and has substituted “fuzzy math” algorithms for traditional problem solving, all of which have frustrated and depressed their previously successful and happy children. Indeed, the web is rife with websites and blogs denouncing Common Core and PARCC, with states steadily withdrawing from Common Core and refusing federal funding and interference. 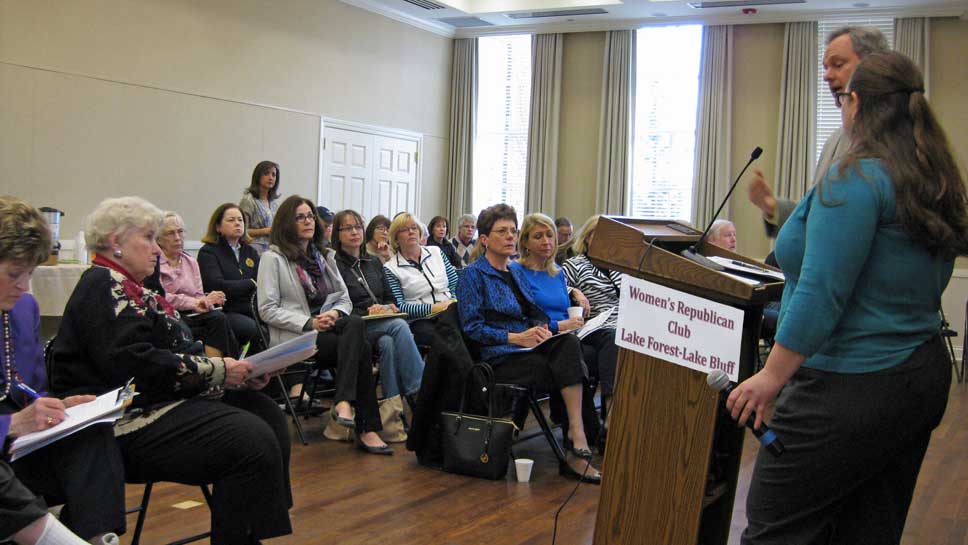 Debater Bruno Behrend, Senior Fellow of the Heartland Institute expressed grave concerns about Common Core, PARCC and the fact that the federal government and private consortia had developed these standards “in an opaque fashion” without meaningful input from relevant stakeholders. He noted the only credible, nationally recognized educators “walked away” from the Standards’ development process early on. He decried the as yet unknown expense to implement the Standards and PARCC testing, but was chiefly concerned with the centralization of education, noting that what made the United States the innovative power house of human history was the ability of its people to pursue their dreams and aspirations without being forced to adhere to a federalized educational regime that would not take into account regional population differences or interests, but simply make students a “cog” in a machine preconceived by a small circle of elites. He noted that nearly the whole of human history and wisdom could be accessed on his cell phone and decried any system that served to narrow curriculum choices or force all school districts to adopt a set of “standards” or put any substantial limits on school districts to choose what would best serve their populations.

Pro-Common Core debater Jessica Handy, Governmental Affairs Director of Stand For Children-Illinois, while not addressing these broader points, noted Common Core’s focus on teaching “higher order thinking skills” but failed to address audience questions about the propriety of same in an elementary school setting. Others questioned the wisdom or utility of any test lasting 90 minutes for 3rd graders, one mother noting her son’s physical inability to sit for a 90 minute test. Handy admitted the test timing needed “tweaking” but maintained the Common Core Standards and PARCC testing would prove their merit over time.

More LFHS testing recommences March 17, 18 and 19 and for four days in May, 2015. Instructional time for all students is reduced by two hours per day during test days, shortening 45 minute class periods to what many believe are a useless 20 minutes each.

I write to inform you of an item of growing concern related to our recent PARCC test participation rates which are falling below the required 95% threshold and have the potential to decline even further. Federal and state law do not provide for any district opt-out provisions.

At this time, we are well below the 95% participation mark, and students’ failure to participate in the PARCC exams will result in the district automatically failing to meet accountability obligations. This could cost the state and the District substantial federal funding dollars that may have a direct impact on programming at LFHS.

In order for our district to be legally compliant, we encourage you to allow your children to take the PARCC exams or have them attend the make up sessions, if they have missed.

Beyond the legal requirement of complying with the law, PARCC does have significant potential to be a better and more meaningful test for assessing student growth. Families will receive their student’s test results showing progress on meeting the new standards. PARCC aligns to districts’ curricula unlike the ACT. PARCC has the potential to deliver real, meaningful data to students and teachers on how well students are mastering higher-level thinking skills and standards.

Our district has invested time and energy providing professional development to teachers, creating testing procedures, and ensuring technological readiness in preparation for the exams.

If you have concerns about PARCC and wish to express them, please voice them in a way that creates no potential harm to all our students grades 9 – 12. Your local or state legislators are responsible for PARCC testing in Illinois.

Thank you for your attention to this important matter. We look forward to seeing your child at the PARCC testing sessions he or she is scheduled to attend.