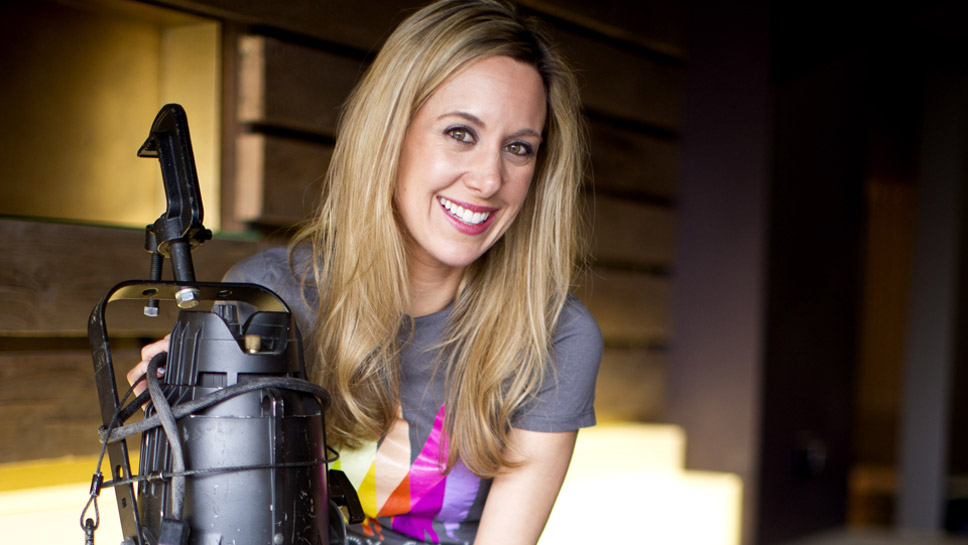 You could say that Deerfield High School alumna Amy Rubenstein has been busy since graduating in 1996.

Combining her business and artistic acumen, Amy, along with her husband Milan and her brother Josh, is one of the forces behind the new Windy City Playhouse, opening on March 23 at 3014 W. Irving Park Road in Chicago.

I spoke with Amy about her career, her new endeavor and more.
Gregg Shapiro: Amy, you have worked in real estate for 12 years. What do you enjoy most about that line of work?

Amy Rubenstein: I love seeing the transformation of the properties. We often buy distressed assets that are frequently vacant and turn them into vibrant and beautiful buildings. The changes are so drastic and most of the properties we buy are in desperate need of this attention. It’s wonderful to see neighborhoods change for the better.

GS: Is there a local real estate trend that you find to be especially exciting?

AR: We are currently re-developing a lot of buildings in Motor Row, just south of the South Loop by McCormick Place. The city has made a commitment to turning these few blocks into a new entertainment district. The streets there have been lacking retail and tourism, but a few major developers have jumped in to change this. A new L stop has been added there, new hotels, the new DePaul Stadium and so much more. It’s very exciting to be a part of such a fast growing and important part of the city.

GS: Your realty specialty is restructuring building management and revitalizing acquired buildings. Can you please explain what is involved in that line of work?

AR: Our company, Windy City RE, buys buildings in need of change whether due to mismanagement, structural deterioration, high vacancies or just a face lift. We then try to find the highest and best use for these properties and follow through with these changes. Sometimes that is as simple as cleaning up the building from the inside to the outside with new roofs, porches, bathrooms, kitchens, etc. — and sometimes it is a little more complicated.

We love adaptive reuse projects, which is was what Windy City Playhouse was. This means we take a property that was formerly used for one purpose and change it to something else. As an example, when we purchased 3014 W. Irving Park it was a previous catering company with apartments above it. It was vacant and in terrible condition, a real eyesore for the neighborhood and literally falling apart. We took the existing structure, gutted the entire building, fixed the foundation, added an extra 15 feet of height in the back of the building, and essentially turned it into a brand new building.

We love adaptive reuse for so many reasons; it takes the best of an old building and restores it to life; it helps the neighborhood keep its roots while staying modern and keeping up with the vitality of a growing city, and it is generally environmentally friendly because we reuse as much building material as possible. The back of our new bar is actually made out of the old roof joists from the building!

GS: Was theater a part of your upbringing, and did your family regular attend the theater?

AR: My parents have always been arts lovers in general. They do see a lot of theater and did take me as a child, but my love of theater started long before I started going to the theater. In fact, I don’t remember my life without theater. I was in acting classes from when I was about six and never stopped.

Every time my parents would take me to the theater it was a bittersweet experience. I had such a burning desire to be on the stage that I would literally get stomachaches from just watching. All I could think about was how to get up there myself to take the audiences on a journey and allow them to step into someone else’s life for a couple of hours. It was pure magic.

GS: Do you remember the first theatrical production that you saw?

AR: I think it was “Alexander and the Terrible Horrible No Good Very Bad Day.” My parents threw me a birthday party at that show. It was probably at Apple Tree Theater (in Highland Park). I don’t remember. I’ll have to ask my mom [laughs].

GS: As a student at Deerfield High School, you performed in theater productions. What are some of your fondest memories of that experience?

AR: I had wonderful mentors there; teachers who truly believed in me. David Hirsch was my first theater teacher there. He headed the department when I was a freshman and cast me in my first show there as soon as I arrived. Then Carl Menninger took over the department and has been a major influence in my life ever since. He is actually an artistic associate with Windy City Playhouse and is directing a show in our second season!  He has always encouraged me to make my career in theater. Carl played a crucial role in the opening of this theater.

GS: What did you like best about growing up in Deerfield?

AR: I had a blessed childhood with two supportive parents and a fabulous education, both of which I am eternally grateful for.

GS: What are the challenges and rewards of being the artistic director of a new theater company such as Windy City Playhouse?

AR: There are so many of both [laughs]!  The startup of this theater has been a huge challenge with so many sleepless nights. Most nights I go to bed on the verge of an anxiety attack, wondering how I’ll ever make it to the finish line, and then I wake up ready to continue on my quest. It’s insane. There are just so many moving parts from choosing the plays and hiring the artistic team, to the construction and buying the chairs and choosing the toilets [laughs]!  It’s never ending.

But the most rewarding part is being lucky enough to work with so many talented people. The theater community has welcomed us with open arms, and I owe so much to all of the artists who have taken a chance on us, especially my directors who jumped into working with me with based on a vision. We share an enthusiasm and passion for a new type of theater experience. I sat through auditions the other night with our casting director, Erica Sartini, who casts for the Goodman, the legendary director Chuck Smith and brilliant local playwright Lydia Diamond, and had to pinch myself. I can’t believe this is real!

GS: How do you see your experience in real estate intersecting with your role as artistic director at Windy City Playhouse, if at all?

AR: The combination of my theater education for my first 20 years and my last 15 years of real estate has prepared me for this role in a unique way. While my passions lie in theater, my business background gave me the skills I needed to make this all come together. I’ve learned how to run a business and can now apply this to Windy City Playhouse. While my parents were always supportive of my love of theater, they were very insistent on my education being as well rounded as possible. This meant theater studies in college (Brandeis University) came with economics and accounting courses as well. And that’s exactly where I ended up I am practically living a double major [laughs].

GS: What can you tell me about the upcoming productions in Windy City Playhouse’s inaugural season?

AR: You are in for something special.  Our season opens with director Henry Godinez (on staff at Goodman) tackling “End Days,” a loving comedy about a suburban family clinging to what they can in the aftermaths of 9/11, whether that be Jesus, Stephen Hawking or Elvis. Henry has been a dream to work with.

Our second play, “Stick Fly,” was originally produced here in Chicago about 10 years ago, went to Broadway and is ready to come back!  Who doesn’t love a juicy family drama? Chuck Smith was the original director and we are so lucky to have him back along with one of the lead actors from the original production, Phillip Edward Van Lear.

Our third play, “Things You Shouldn’t Say Past Midnight,” is a hilarious and naughty show directed by comic genius William Brown, who’s well known for his brilliant work at Writers Theater in Glencoe, among other places. The season finale is a classic romantic comedy set in the 1970s; “Chapter Two” by Neil Simon, directed by the famous Jessica Thebus, who is on staff at Steppenwolf.

GS: You founded the Windy City Playhouse with your husband and your brother. What’s the secret to making sure that everyone gets along?

AR: We are partners in everything together!  My husband and I have been business partners for the past 10 years and the three of us have been working in real estate together for the past four years. We are the perfect team. We each have our own strengths and are aware of our weaknesses. We trust each other implicitly and always have each others’ backs. I could not imagine better partners.