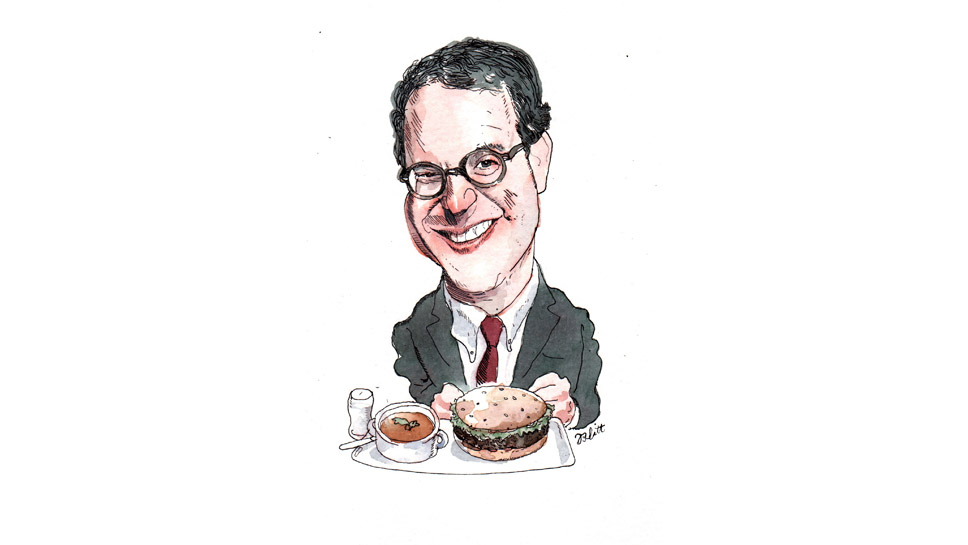 As we walk into The Midway Club, perched on the fifth floor above the Chicago River, Blair Kamin sits down first. Soon it becomes apparent why he chose the seat facing east.
Visible behind his right shoulder rests the sign — one which the Chicago Tribune architecture critic has written scathingly about — on the Trump International Hotel & Tower.

“There it is in all its glory,” jokes the 57-year-old about the word “Trump” hanging above the icy waters. “The sign is too big, poorly placed and poorly designed. There’s the graceful Michigan Avenue bridge with four 1920s towers flanking it. He inserted this enormous sign that is low on the building so it lords over this great civic space. And it’s all about him.”

Over squash bisque and a good-sized hamburger, the Wilmette resident talks about how fortunate he’s been in his nearly quarter century tenure as the city’s premier architecture writer.

“It’s the first city of American architecture, on account of its extraordinary past and its continued vitality,” Kamin says. “To be able to write in Chicago, where architecture is so much a part of the conversation, is like being a theater critic at The New York Times.

“Architecture is a fascinating field. It combines ideas, money and power. You can ignore a painting or a sculpture, but I call architecture ‘the inescapable art.’ It’s ever present.”

Kamin’s passion for the process of designing buildings was spurred during his sophomore year at Amherst College, where a course in Gothic architecture beguiled him. It was only fitting that in 1986, he stepped into Tribune Tower — perhaps the most famous neo Gothic building in America — as a Des Moines Register reporter looking for a new job.

During an interview, Kamin was asked by Tribune editor F. Richard Ciccone where he’d like to be in five years. Kamin responded: the newspaper’s architecture critic.

Only one problem faced him. Pulitzer Prize winner Paul Gapp held the post.

“He called Gapp and said, ‘This is Ciccone. I’ve got a guy in here who wants your job,’ “ recalls Kamin, noting that it was done with a touch of humor. Upon meeting his purported successor, Gapp was as nice as could be.

“I had very big shoes to fill. I was following someone who had established the beat,” Kamin recalls. “I’ve always tried to make the buildings relevant to readers. Even if readers don’t agree with me, you want them to engage in the building environment.

“There’s always a controversy in Chicago, whether it’s about the Obama Library or the Lucas Museum. That’s good — those controversies bring architectural issues to public attention.”

One controversy Kamin has tackled is the renovation of Wrigley Field — not the easiest topic to pan as one of his Wilmette neighbors is Chicago Cubs Chairman Tom Ricketts. He waxed lyrical about the ballpark during its centennial but is a bit wary of the slow-moving overhaul costing hundreds of millions of dollars.

“I was critical of the early proposals for the signs – there were too many,” says Kamin, who crafted a piece in December praising the National Park Service for provoking the Cubs to offer new renderings that showed “a marked improvement on the team’s previous sign-cluttered plan.”

Eighteen years ago, Kamin embarked on an ambitious six-part series about the state of Chicago’s lakefront, examining the promise and problems of the shoreline.

“The very park named for (Daniel) Burnham, which sits on the stretch of the south lakefront lined with high-rise public housing, is a monument to neglect and inequality, a rubble-strewn landscape that lacks the basic facilities, from restaurants to restrooms, that most parkgoers take for granted,” he wrote.

Kamin received the Pulitzer Prize for Criticism in 1999 for his work.

“I’ll never forget the day,” he recalls. Knowing he was a finalist for the award, he was taken to lunch by Tribune editor Anne Marie Lipinski. Yet she said nothing about a victory. They walked back to the Tribune Tower.

“I saw all these people gathered around, and the news came over the wire,” Kamin says. “It was like getting whacked in the head — but joyously.

“It’s been gratifying to see many of the changes the series advocate for come to fruition — a Grant Park that has come alive with Millennium Park and a better South Side beachfront. These were fringe concerns when the pieces were written.”

Though he won’t pick a favorite Chicago structure — citing the fact a parent would never pick a favorite child — Kamin says the Tribune Tower, the former Carson Pirie Scott building on State Street and the John Hancock Center all move him. And he is a huge fan of North Shore architecture. Notes Kamin, “It is particularly rich when it comes to downtown architecture, such as Market Square (in Lake Forest). To drive up and down Sheridan Road is a pleasure. So many great architects, from David Adler to Frank Lloyd Wright.”

Outside of his job, Kamin is working on two print books, one about the gates at Harvard Yard (an idea prompted from a Neiman Fellowship there that has been published as an e-book) and another about the architecture at Amherst College. Aside from adding to his collection of 60 miniature buildings (including two of the Flatiron in New York City) in his spare time, Kamin also enjoys riding his bike from Wilmette to the Chicago Botanic Garden. He and his wife, former Tribune reporter Barbara Mahany, are also busy attending the soccer games of their eighth-grade son Teddy while another son, Will, attends Amherst.

As lunch comes to a close, Kamin glances over my right shoulder. There is another sign there, that of the Loews Chicago Hotel, near the summit of the building. Ironically enough, the new hotel is the subject of his column two days hence.

Kamin — once referred to by Trump on the Today Show as a “third-rate architectural critic” — concludes the meal with a delicious observation.

“That sign,” he notes, “is far less visually damaging than the other one.”