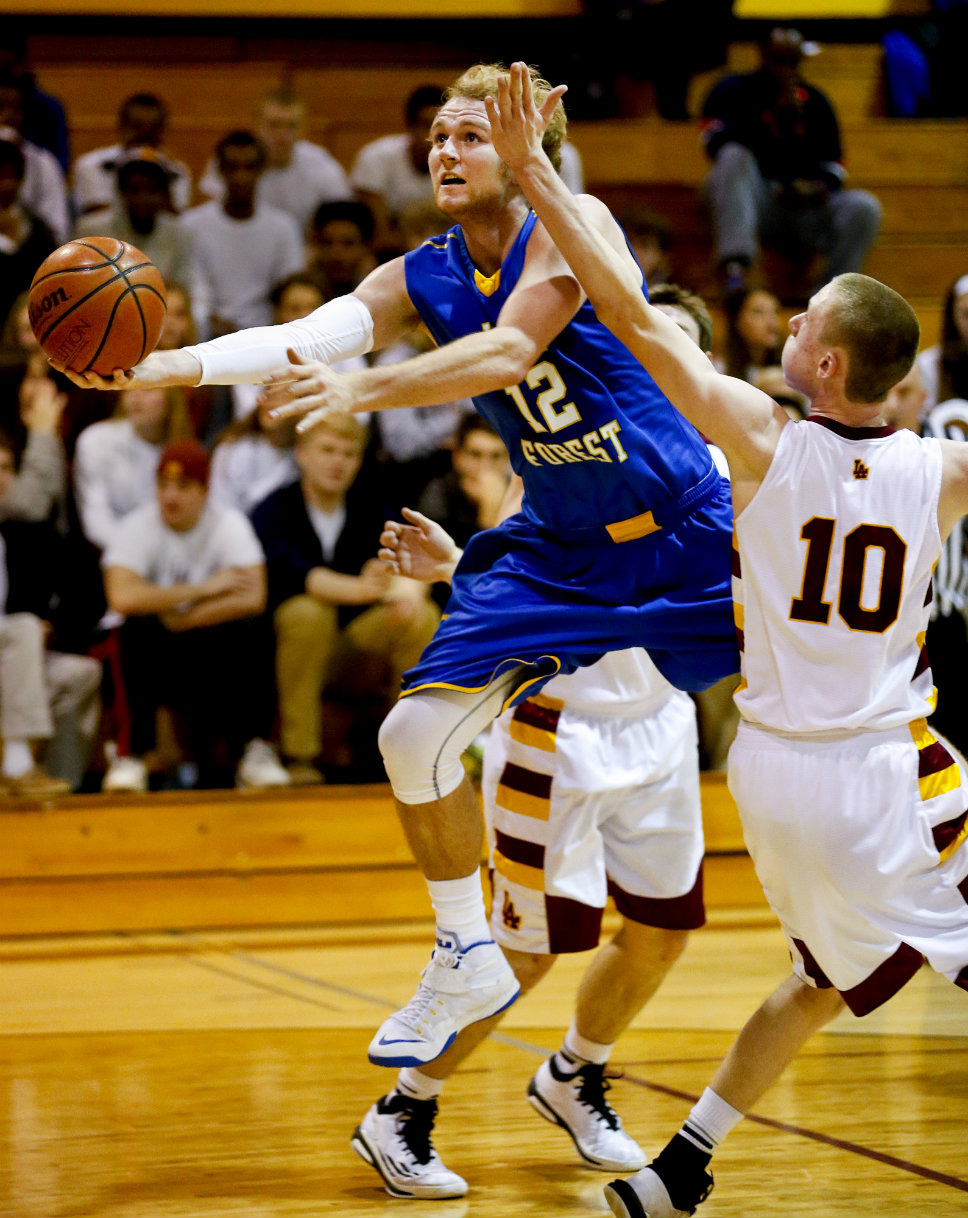 Evan Boudreaux of the Scouts takes it to the hoop during earlier action this season. Photography by Joel Lerner

The son sits on a couch at home, watching television on a summer day. The father stands nearby in the kitchen, looking at the mail. Letter, bill, magazine, flyer, another bill, a letter from the University of Wisconsin men’s basketball program, … The UW correspondence is addressed to the son, Evan Boudreaux. The father, Terry Boudreaux, separates it from the other pieces of mail.

“You are not going to believe this,” Terry says to Evan.

He is a senior at Lake Forest High School now, a 6-foot-8, multiple-record-breaking forward-center for the Scouts’ varsity basketball team (21-1 through Feb. 9). More Big Ten schools, not just Wisconsin, had recruited him. PAC-12 schools had courted him. Ivy League schools had wanted Boudreaux to hit the books in street clothes and to hit clutch shots in their basketball togs. The recruitment process ended, finally, last fall. Boudreaux chose Dartmouth College, where his mom, Gail, went, where his brother, Christopher, is a senior sociology major.

“Lots of ups and downs,” the 18-year-old Boudreaux says of the four-plus years of being contacted and wooed and flattered by strangers who wear whistles at college basketball practices and sharp suits at college basketball games. “I wanted a school with great academics, with great athletics. Dartmouth’s coach [Paul Cormier] was honest with me, right from the start, my freshman year. I appreciated that. What I had been thinking about a lot, before deciding on Dartmouth, was the next 40 years of my life, not the next four. I know there’s going to be a day when the basketball stops bouncing.”

The last day former Lake Forest High School star Matt Vogrich (Class of 2009) held the program mark for most career points (1,496) was Dec. 13. Boudreaux surpassed that figure during a win at Libertyville High School and had netted 1,848 career points through Feb. 9. His career number of rebounds, after 22 games this winter, stood at a program-best 1,149. The inside-outside scoring threat was averaging 24.8 and 12.9 rebounds per game, a year after finishing with averages of 24.6 points and 14.4 rebounds. Big numbers, imposing numbers.

“What I’ve noticed about Evan, what impresses me about him more than any else, is his consistency,” Scouts assistant coach Austin Scott says. “At practices, at games, at open gyms, he’s the same, shows the same 100-percent intensity at both ends of the court. He is a heck of a tough matchup for high school players. Evan is also as level-headed as they come, never getting too high and never getting too low.”

Boudreaux’s court demeanor stands out almost as much as his court production does. He is placid-looking when the score is 0-0. He is placid-looking when it’s 72-72, ball in his hands, time running out in the fourth quarter, crowd at a 787-jet-taking-off decibel level. Part of the tranquil visage — masking a competitive, inferno-esque fire — stems from his wiring as an athlete. Battling in numerous national AAU basketball games, often as the youngest hoopster on the court during his grade-school years, helped Boudreaux grow his game. Physically, mentally, emotionally. He got Wisconsin’s attention at an AAU game in Florida, back in 2010. The kid with the preposterously mature game and comportment would open more eyes from all kinds of schools.

There wasn’t much he hadn’t seen on a basketball court by the time he played his first varsity game at LFHS. Familiarity breeds constant success.

“Evan doesn’t get rattled much,” says Christopher Boudreaux, a Lake Forest Academy graduate and a tight end for Dartmouth’s football team as a freshman. “He is calm in games, absolutely calm … on the outside. That’s what you see. Growing up with him, I saw how super competitive he is, his incredible work ethic, his willingness to shoot every day. I played against him, in our basement [in one-on-one clashes, on a half court]. He was as competitive then as he is now.”

The 6-foot-4 Gail Boudreaux, when she was Gail Koziara, was a dominant Big Green post player for the women’s basketball team at Dartmouth, averaging 21.9 points and a remarkable 18.4 rebounds per game during her career (1978-82). Big numbers, imposing numbers. She is Dartmouth’s all-time leading scorer and rebounder. She wore out team statisticians and fans’ vocal cords, just like her son continues to do these days.

“Our fans are great, the best, especially our student section at home games,” Boudreaux says. “I’ll miss them and Lake Forest High School after I graduate. I’ll miss the home gym, everything about the home gym. The community support for a basketball team couldn’t be any better than it is here.”

Editor’s Note: This story in the March 2015 issue of Forest & Bluff magazine.