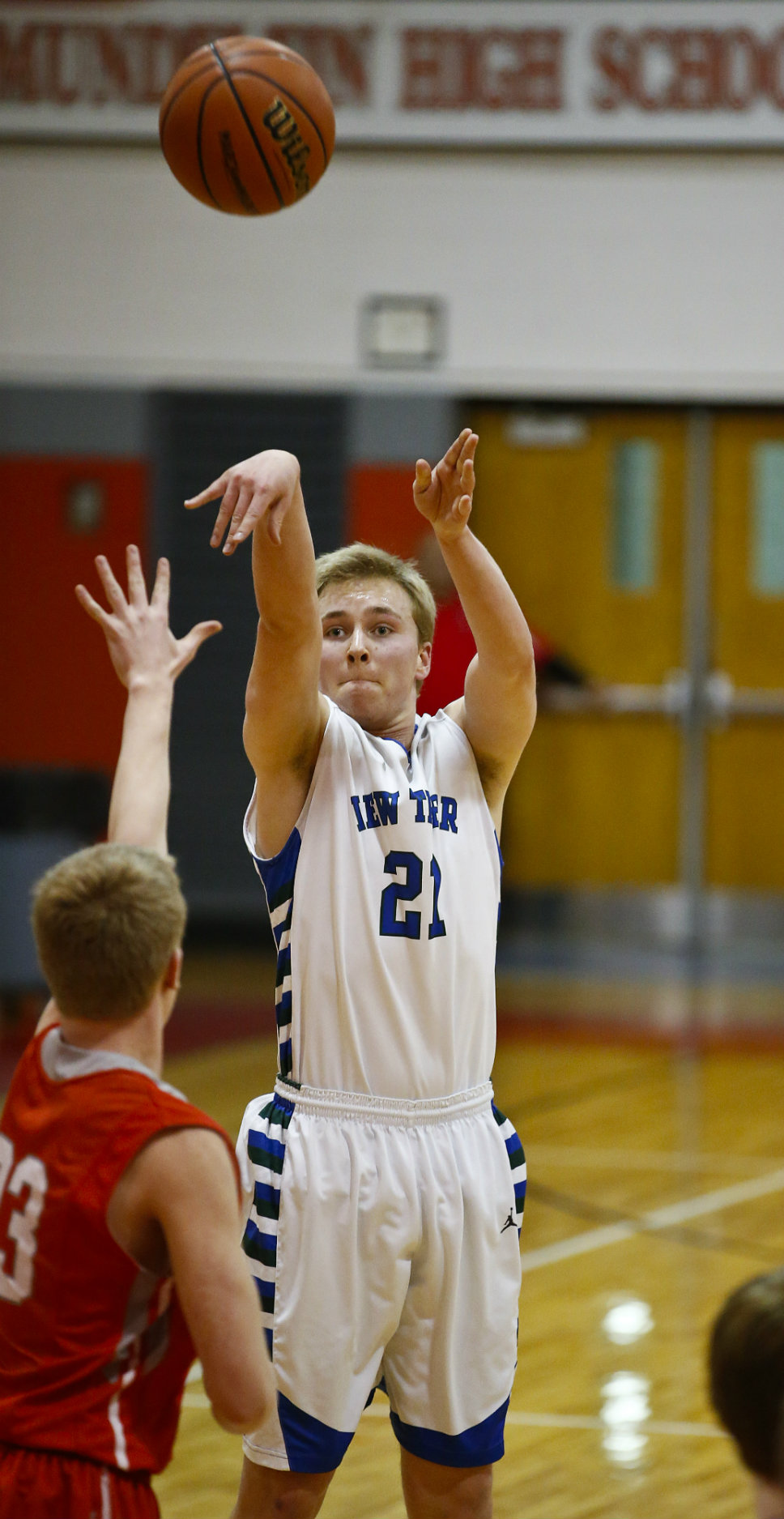 The Haak household had an uh-oh moment several years ago.

Just one of those little life twists.

Ryan Haak, just a youngster at the time, threw mom and dad a curveball.

“I told them that I didn’t want to swim,” said Haak.

Which is like telling someone in the Kennedy family that they’re not going into politics.

“My dad has seven brothers and sisters, and they’re all swimmers,” said Haak, an only child. “Swimming put them through college.

“Saying that I wasn’t going to swim didn’t sit too well with them.”

Ryan Haak, instead, carved out his own niche — minus goggles and chlorine — in the sports world.

A two-year varsity performer, Haak capped his career with a team-high 16 points in NT’s 44-41 setback to Highland Park in the semifinal round of the Class 4A Mundelein Regional on March 4.

Haak, a former post player, was a full-fledged member of the Trevian Bomb Squad, which fired up a school record 582 three-point attempts this season.

“You don’t pay much attention to that as the season goes along,” said Haak. “But that’s a lot of threes. Almost 20 per game.”

Haak definitely had the three-ball going against Highland Park. He drained three three-pointers in the opening quarter, which allowed the Trevians (20-10) to take a 14-11 advantage.

Haak also was clutch at the end of the game. He scored New Trier’s final five points on a basket inside and a three-pointer from the left wing which trimmed HP’s lead to 42-41, with 42 seconds left in regulation.

“Ryan can shoot the ball,” said New Trier head coach Scott Fricke. “He’s made four threes in a couple of games this season.

“He was given the freedom to take them,” the coach added. “And he was helped out quite a bit by having Robbie (Abuls) and David (Hammes) on the court. He was a beneficiary of that.”

“Three-point territory was pretty foreign to me — until this year,” said Haak, who, as a junior, backed up Boyd in the post. “I’m the same height now that I was when I was freshman. My game was playing inside and getting into the lane.”

It didn’t take him long to find his bearings on the perimeter — and to think like a three-point shooter.

“It’s all about having a short memory, when the shots aren’t falling,” said Haak, who made 32 threes this season. “If you miss, just get back on defense.”

Abuls, who has played with Haak since the fourth grade, liked the way Haak transitioned himself.

“It’s not easy to go from being a big to a guard,” said Abuls, who will play his college basketball at DePauw University in Greencastle, Ind. “It takes a lot of hard work to get there. Ryan worked hard on the transition. He worked hard on his guard skills, and he became a knockdown shooter for us.

“He might not be a big name in the press or anything like that,” added Abuls. “But he was big on our team. Every team needs guys like him.”

Besides his versatility, Haak’s other strength is persistence. Prior to his junior year, he had two major knee surgeries. He kept at it.

“I wasn’t moving real well (junior year),” Haak said. “That was pretty evident. I had some physical limitations. The best way for me to contribute to the team last year was to back up Sean.”

Haak’s athletic career at New Trier is not quite over.

Baseball is his other love. And as a side-arm right-handed pitcher, he’ll be looking to throw some more curves.

“I switched from shortstop to pitcher this summer,” said Haak. “I don’t know what role I’ll have. Anything can happen.”

Notable: Abuls and Hammes were named to the all-CSL South team. Abuls led the Trevians in scoring (14.4) and steals (58). He made 49 percent of his field goals and 77 percent of his free throws. He made a team-high 52 threes. Hammes, a three-year varsity player, averaged 6.8 points per game. … Boyd pulled down a team-high 113 rebounds to go along with 38 assists and a team-best 14 blocks. … NT’s assist leaders with juniors Michael Hurley (74) and Tino Malnati (71). … In the regional semifinal loss to HP, Malnati had eight assists while Boyd led the team in rebounds with six. The game had eight lead changes, including five in the second quarter. New Trier, which scored the game’s first seven points, fell behind 34-24 late in the third quarter but battled back. In fact, Abuls’ 17-footer from the right corner gave the Trevians a 36-35 lead with 3:16 left to play. … “We feel very fortunate to come out with a win,” said HP head coach Paul Harris, after the game. “We’re two very evenly matched teams. We have the same strengths (outside shooting).” … HP’s Jordan Krawitz was one of the unsung heroes of the game. He had only five points and three rebounds. But his rebound basket with 2:24 left to play was huge. “That tip-in (by Krawitz). That’s the play that’s going to keep coming back in my thoughts for a long time,” said Fricke.